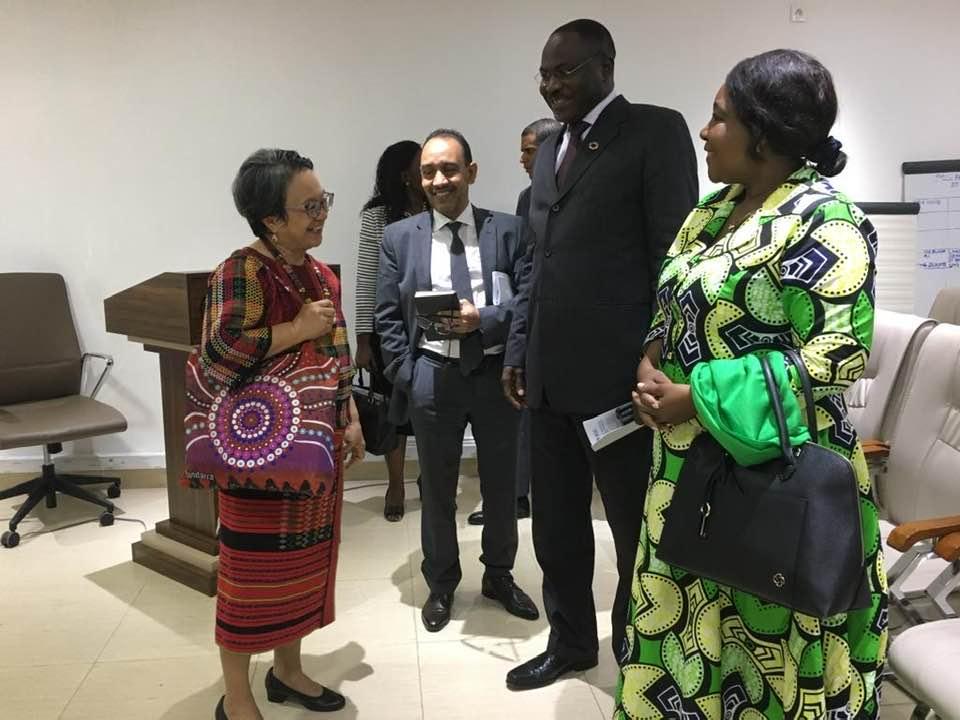 UN Special Rapporteur on the Rights of Indigenous Peoples Victoria Tauli-Corpuz undertook an official mission to the Republic of Congo at the invitation of the Congolese government on October 14-October 24, 2019 and recently released her final report. The purpose of the mission was to assess progress made in the implementation of Indigenous rights. Tauli-Corpuz met with Indigenous representatives in Brazzaville from the Lekoumou, Pool, and Plateaux departments and travelled 800 km north to meet with three Indigenous forest communities in Pokola and Kabo, speaking with members and representatives of the Ngatongo, Bomassa, Peke and Djaka communities.

Unfortunately, the observations of the previous Special Rapporteur on the Rights of Indigenous Peoples James Anaya remain the same. There is no representation of Indigenous people in dominant positions of the government and Indigenous peoples continue to suffer threats and violations to their basic human rights in ways not experienced by the Bantu majority. What is especially concerning is that most government officials assured Tauli-Corpuz that no such discrimination exists and that any issues they face are the same issues non-Indigenous Peoples face in the Congo. While the Bantu also suffer from a lack of services, that does not negate the history of persecution against Indigenous Peoples in the country.

The National Action Plans adopted by the government have delivered partial results, including equipment, construction of classrooms, provision of teaching materials, the opening of school canteens, and mobilizing Indigenous communities. Work still needs to be done though, as illiteracy continues to be widespread among the Indigenous Peoples. UNFPA reported that 65 percent of Indigenous children between 12 and 15 are not in school, a disproportionate rate compared to 39 percent at the national level. Indigenous educators cite a lack of finances as the main reason, as most teachers in the Republic of Congo are recruited through parental contributions, something most Indigenous families cannot afford.

Creating school systems that cater more to Indigenous children can increase Indigenous students attendance, creating the potential for more leaders in Indigenous communities. The methods include speaking in their mother tongues and studying their history, inviting Indigenous figures to keep students engaged and alert. Tauli-Corpuz’s visit to the Ngomba and Sembola communities highlighted the problem with student drop-outs. Indigenous children are also often bullied by other students. The Minister of Primary and Secondary Education and Literacy has rejected this, however statistics from his own ministry show that Indigenous adolescents represent 0.05 percent of junior high school students and 0.008 percent of high school students, and emphasize that girls especially are excluded from education.

Indigenous people in the northern part of the country discussed a lack of access to health care as troubling issue. Visiting the State-run hospital in Ouesso, the main reference hospital for the region, on a day of heavy rains, Tauli-Corpuz witnessed the hospital walkways completely flooded, there was no running water, a lack of toilets in every section but the maternity ward, and there was no functioning equipment for sterilization. Only three members of the medical staff at the hospital were paid on a consistent basis. While the hospital director assured Tauli-Corpuz that Indigenous patients in the hospital are treated for free, Indigenous Peoples nearby contradicted his statement.

In addition to a lack of resources, Indigenous Peoples complain about discrimination from Bantu doctors. Indigenous women in particular were treated as though they were “dirty.” Unfortunately, there are no statistics on Indigenous Peoples’ experiences. The Minister of Health and Gender has acknowledged the situation at the hospital of Ouesso, and explained the circumstances are similar for many countries across the Congo. The Minister discussed her hopes that a project dedicated to access to maternal health care in Sangha and Lekoumou départements would start soon, and hospitals would begin to be refurbished. She also talked about efforts to recruit Indigenous medical personnel, which would especially help Indigenous patients feel more comfortable and integrate the full understanding of Indigenous medicinal systems.

Indigenous rights to land are still not respected in the Congo. Though Law 5-2011 recognizes their right “to own, possess, access and use the lands and natural resources that they have traditionally used or occupied for their subsistence, pharmacopeia and work,” the state is still able to take land away from Indigenous Peoples. Indigenous people discussed how they have yet to be given any land titles, and land that they occupy is given to conservation and forest areas without consulting the Indigenous Peoples that live on the land. Indigenous individuals complained about harassment from police and violence suffered from eco-guards, and some have been thrown in jail accused of poaching, despite practicing customary traditions such as hunting.

Tauli-Corpuz echoes her predecessor’s sentiments, recommending that the “government develops and fully implement a new procedure for demarcating and registering lands in accordance with Indigenous Peoples’ customary rights and tenure, and new mechanisms for identifying and securing specific rights on natural resources.” Indigenous people should be consulted first and foremost over decisions made about the future of their lands. Legislation is needed on land, forests and protected areas to “ensure that these are aligned with the Law No. 5-2011.” As of right now, there is no particular mention in the NAP on actions to recognize and protect the rights of Indigenous Peoples to their lands, and Tauli-Corpuz calls on the government “to edit this plan to include recognition of Indigenous land rights as a priority.”

Indigenous women and girls raised the lack of access to sexual education and reproductive healthcare, impacts of domestic violence, sexual assault, maternal and infant mortality, early marriage, and lack of access to food. In their communities, there are usually no active water facilities, which increases their burden to provide for themselves and their children, often times putting them in danger. It is necessary that healthcare services be more accessible to Indigenous women so they did not have to risk their lives to find clean drinking water. Most Indigenous women give birth at home, due to hospitals being too far or that being their choice. Infant mortality is high due to infections from improper sterilization practices of medical equipment.

Access to justice is a major issue for Indigenous communities. Many Indigenous people feel they have nowhere to turn when they are being persecuted and their rights are violated. This is especially the case for Indigenous women assaulted and raped by Bantu men. Their complaints to police go unheard. There are a disproportionate amount of detainees of Indigenous descent, and they become extremely malnourished due to poor conditions and overall cruelty, despite the state saying it is mandatory they are fed and given decent treatment. Families cannot or are unable to visit their family members in jail due to a lack of accessibility.

No Indigenous person has ever been elected to the National Assembly and Indigenous Peoples have no representation further contributing to the marginalization of their rights and issues. Tauli-Corpuz urges the government to adopt a decree that would “facilitate the recognition of Indigenous communities’ hamlets, which are usually subjected to the authority of a Bantu village, as self-standing villages recognized by the State as equal in stature to Bantu villages.”


The lack of true implementation of legislation and the abuses of Indigenous Peoples are deeply troubling. Tauli-Corpuz concluded her report, “Indigenous Peoples should not be considered as burdens or obstacles to development and as backward, primitive people. They should be regarded as human beings who have dignity and equal rights with all other people and who have and continue to do their role in saving and protecting biodiversity and forests. They can contribute their traditional knowledge on natural resource management, climate change mitigation and traditional medicines and they enhance the cultural and linguistic diversity of this country.”