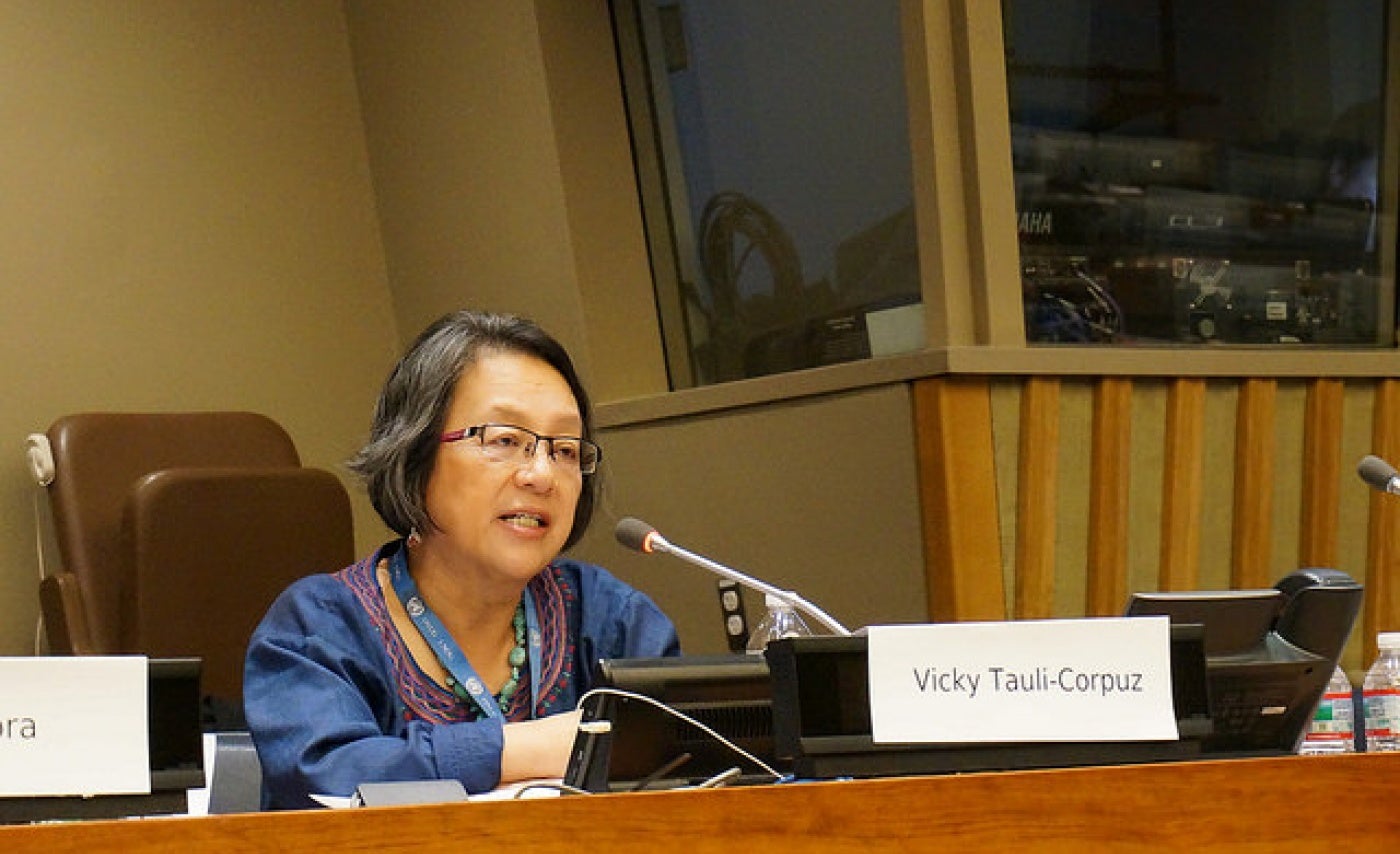 UN Special Rapporteur on the Rights of Indigenous Peoples Victoria Tauli-Corpuz met with Indigenous leaders, Tribal governments, and members of the federal government as part of her official visit to the United States on February 22 - March 3, 2017. The Obama Administration invited Tauli-Corpuz to conduct the visit and the Trump Administration honored the request for what was their first meeting with a UN Special Rapporteur.

Consulting with and implementing the recommendations of Tribal governments remains a central issue, Tauli-Corpuz explained, “The legislative regime regulating consultation, while well intentioned, has failed to ensure effective and informed consultations with Tribal governments. The breakdown of communication and lack of good faith in the review of federal projects leaves Tribal governments unable to participate in dialogue with the United States on projects affecting their lands, territories, and resources.” Resource extraction and other energy projects including the Dakota Access Pipeline (DAPL) and the Keystone XL pipelines were prominent in Special Rapporteur’s conversations. Tauli-Corpuz visited  Washington, D.C., Albuquerque, NM, Window Rock, AZ, Boulder, CO, Fort Yates, ND, Fort Berthold, ND, Bismarck, ND and met with

In North Dakota, she also held meetings with Governor Doug Burgum, representatives from the State Historic Preservation Office and the Commission on Indian Affairs, members of the legislative branch including the office of Senator John Hoeven, chair of the Senate Committee on Indian Affairs and the office of ranking member Norma Torres of the House Subcommittee on Indian, Insular, and Alaska Native Affairs.

Additionally, via the first ever virtual consultation, Tauli-Corpuz spoke with representatives from Indigenous communities she was not able to visit due to time constraints, including communities from Alaska and Hawaii. She also met with the Inter-American Commission on Human Rights and a wide range of other civil society and human rights organizations working on Indigenous Peoples’ rights. While in DC, the Special Rapporteur conducted meetings with officials from the Trump Administration to discuss budget cuts and executive orders that will impact the Indigenous Peoples’ rights and the environment, especially the Dakota Access pipeline. As part of her visit, Tauli-Corpuz sought to follow-up on recommendations made by her predecessor, James Anaya, in 2012 and 2013. Tauli-Corpuz recognized some “encouraging steps being taken by federal agencies to follow procedures set out in the UN’s Declaration on the Rights of Indigenous Peoples” but found that many of the recommendations made by Anaya still remain unrealized and “are not really implemented in any significant way, especially human trafficking and domestic violence on reservations.”

On March 2nd, the National Congress of American Indians (NCAI) hosted a consultation event entitled “Improving Tribal Inclusion in the Federal Infrastructure Permitting Process” for the Special Rapporteur to hear from civil society organizations and Tribes. A representative from the Native American Rights Fund discussed the Cheyenne River Sioux injunction and the fact that Tribes who are pro development want to share in the benefits. Now most profits go to the state governments and private developers. A representative from an International Leonard Peltier Rights Commission discussed the role of mineral resources in Native American activism both of Peltier and others. Roberto Borrero, representing the International Indian Treaty Council spoke about the need for the US to also respect sacred lands and practices in territories such as Puerto Rico and other non-Federally protected lands such as state recognized reservations. He also mentioned that Indigenous religious practices should have equal protection as religions such as Christianity and that if sacred lands have mineral resources, Tribes should have some input on their use and compensation. The Amnesty International representative shared findings from the human rights observers sent to Standing Rock which led to Amnesty International’s demand that the Department of Justice investigate the policing at Standing Rock protests. The spokesperson for the National Women’s Indigenous Resource Center addressed the increase in crime and especially in sexual violence, in areas where more than 100,000 non-Native workers from extractive industries work. These workers tend to be temporary or transient and if one rapes or murders a Native woman outside reservation boundaries, such a crime is also outside Tribal police’s jurisdiction. So far, federal authorities have declined to prosecute 67 percent of these sexual assaults.

The discussion at the March 2nd event reflected many of the same themes discussed in Tauli-Corpuz’s End of Mission Statement, including extractive industries and energy development. Regarding the DAPL and Keystone XL pipelines, Tauli-Corpuz stated, “I am deeply concerned by the January 24, 2017 presidential memorandum, granting the last easement necessary to begin construction of the Dakota Access Pipeline under Lake Oahe, and the Notice of Termination of the Intent to Prepare an Environmental Impact Statement. I am also concerned about similar impacts on Indigenous Peoples of the Keystone XL Pipeline and the January 24, 2017 executive order inviting TransCanada to resubmit its permit application to the State Department, while ordering the Secretary of State to expedite the review process.” Citing the show of disrespect for treaties and Tribes when the Army Corps approved a draft environmental assessment that ignored the interests of the Standing Rock Sioux and included maps that omitted the reservation and made no mention of proximity to historic treaty lands, Tauli-Corpuz pointed out that the Corps “gave multiple domestic authorizations permitting the construction of DAPL,” including the authorization for discharging materials and waste into waters throughout Tribes’ ancestral lands “without an adequate social, cultural or environmental assessment, and the absence of meaningful consultation with or participation by the Tribes.”

She also discussed the Pick-Sloan project, another example of a project “undertaken without Tribal consent.” The Pick-Sloan project which included the construction of two dams by the US Army Corps of Engineers to control the flooding of the Missouri River “to improve irrigation, and to provide hydroelectric power to the region … created Lake Oahe and Lake Sakakawe” and “submerged hundreds of miles of Tribal lands and displaced thousands of Indigenous people. The submerged lands, adjacent to the Missouri River that were flooded in the construction of the project were the most fertile and abundant in wildlife. In displacing Indigenous peoples from this watershed, the Corps failed to relocate Native American graves. The project has been described by the late scholar Vine Deloria, Jr. as ‘the single most destructive act ever perpetrated on any Tribe by the United States’ … Though Congress provided monetary compensation to the Tribes, the devastating effects of the Pick-Sloan persist today in the form of poverty and continued conflicts over Tribal lands. Particularly, the painful history of Lake Oahe has resurfaced in the ongoing Dakota Access Pipeline issue.”

Tauli-Corpuz called on the federal government to meaningfully consult Tribal communities, positing that “the goal of Tribal consultation is not simply to check a box, or to merely give Tribes a chance to be heard. Rather, the core objective is to provide federal decision makers with context, information, and perspectives needed to support informed decisions that actually protect Tribal interests. Treaty rights, the federal trust responsibility to Tribes, environmental justice, and the principles enshrined in the Declaration all must be given life and meaning in federal decisions that impact Tribes. Meaningful consultation has the potential to provide the solid foundation for such decision, but federal agencies must be willing to recognize these principles and to work actively to put them into practice uniformly at the local, regional, and national level.” Tauli-Corpuz commended the Bear Ears Monument which with its “unprecedented model of co-management with local and regional Tribes … allows for the continued use of the area for cultural practices for future generations while using Indigenous communities’ traditional knowledge to protect a unique cultural and ecological landscape for the use and enjoyment of the Indigenous peoples concerned, as well as the public.”

In other cases, however, the protection of sacred places is severely restricted by the US legal system. Tauli-Corpuz cited Mount Taylor and Chaco Canyon, which are designated as traditional cultural property and a UNESCO World Heritage site, respectively. However, “despite these designations, proposed mining and oil and gas projects threaten to desecrate these landscapes and Indigenous lifeways as the federal government, rather than the Indigenous peoples concerned, has final authority over the exploration and development of these areas.” Tauli-Corpuz recommended working with Tribal Historic Preservation Officers to protect Tribal cultural materials and suggests that efforts “be made to amend existing laws governing the protection of sacred and cultural places to encompass an Indigenous definition of sacredness as an interconnected landscape with unique relationships to the practice of religions, strengthening of community, livelihoods, subsistence, and gathering of traditional medicines and resources.”

The Special Rapporteur also addressed the risks to the health and safety of Indigenous people from extractive industries. Uranium mining in the 1940s continues to haunt the Navajo Nation, while the Gold King mine in Colorado, which caused “three million gallons of contaminated water to flow into the Animas River onto the Navajo Nation reservation over one hundred miles away … [and] caused severe damage to crops and livestock, threatening the livelihoods of farmers and ranchers” even after the Gold King Mine has not been operational since 1923. Tauli-Corpuz also referenced natural gas flaring in North Dakota’s Bakken formation as well as natural gas pipeline infrastructure that exposes the Mandan, Hidatsa, and Arikara Nation to harmful pollutants whose impacts include cancer, lung damage, and neurological defects. Water safety remains a critical issue in the Standing Rock protests but also for Indigenous people in general, for whom “water provides lifeways, subsistence, and has undeniable spiritual significance. In Lakota they express this belief as Mni Wiconi: water is life.”

Extractive industries also put women and girls at an increased risk of sexual abuse and trafficking; “already Native women are 2.5 times more likely to be sexually assaulted in their lifetimes as compared to other women in the United States. And, when the oil boom began in the Bakken, the influx of oil and gas workers to the area coincided with a dramatic increase in violent crime and an incredible increase of human trafficking of Native women and children.” Tauli-Corpuz recognized that Indigenous control over their energy resources as part of a desire for self-determination, would better serve their communities both economically and with regards to health and safety. The Special Rapporteur thus expressed support for Tribe-owned companies, stating “I have been very impressed by the remarkable and unshakeable resolve Tribes have to find creative ways to self-determine their development. For example, the Mandan, Hidatsa, and Arikara Nation recently formed Missouri River Resources, a wholly-owned Tribal company dedicated to using best practices in the oil and gas industry to generate economic benefits for the Tribal community through responsible oil development. Similarly, the Red Willow Production Company, a $2 billion company wholly owned and managed by the Southern Ute Tribe, has been generating revenue through oil and gas development on their reservation since 1992 and continues to maximize benefits for their Tribal community while carefully managing their lands and resources.”