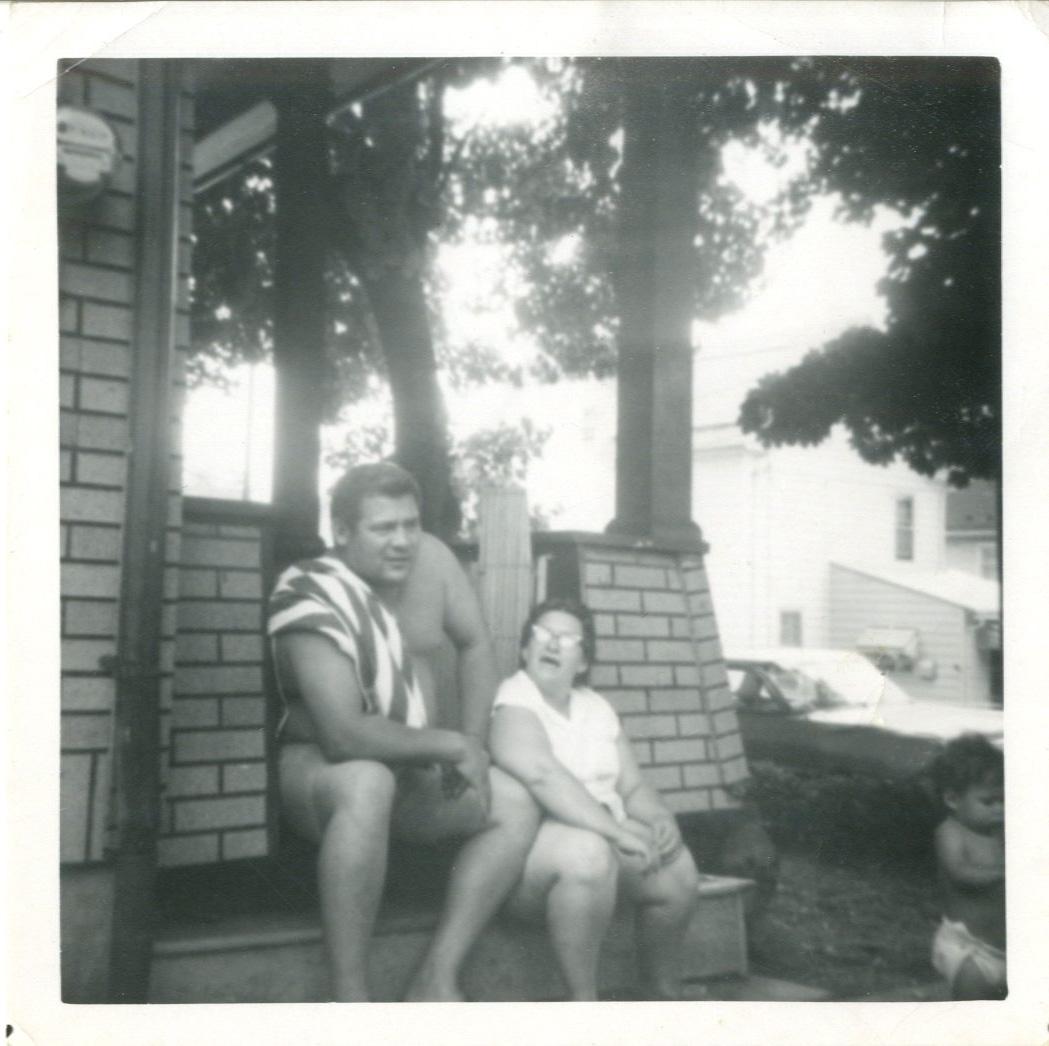 I wanted to tell a story about traditional kindness and ritual laughter for three primary reasons: to honor my own family and upbringing, to recognize the number of experiences I have had in Native communities and with Native peoples for whom this way of culture, expectations, and living pervades, and to show how acts of kindness and rituals occur in the every day rather than being restricted to sensationalized grand traditions or only in specific ceremonial rituals.  For several decades, I spent time in, worked in, and been part of Indigenous communities domestically and abroad.  I want to offer a view and understanding of Indigenous culture that is rooted in living, which extends past notions of the romantic and exotic, to an embraced existence defined and known through family, relatives, activities and ultimately beliefs rooted in relationships.

When I was in my late twenties, I vividly recall spending time on my family’s outdoor porch with my father in east central Pennsylvania.  Our family’s porch with two large maple trees providing shade and a playground for the squirrels, was a treasured space in my life.  I was in my favorite location, sitting on the porch banister with my back against one of the columns.  My dad was on the glider with an ice-tea nearby.  My nieces and their friends came running out of the house past my dad.  As they passed, he “spanked” each child with his cane, the cane he now used after diabetes had taken one of his legs below the knee.  His grin was contagious.  His kindness and joy of life flowed from the cane to each kid as he touched them as they scooted past.  The kids, who I think were merely surprised, giggled and shouted “Pappy” in an ever-present fondness as they scurried to capture life’s beauty.

I am hard-pressed to identify a time when I was with my family when there was an absence of kindness or laughter.  It was that innate.  Of course we had our disagreements, scrabbles and scraps. Yet, we dominantly identified with being communal – in practice, much much more so than in verbiage or talk.  We lived community.  We grew up as the “poorest” family on our block, probably neighborhood.  However, if you asked me then, I wouldn’t have identified myself that way.  Our house is where all the neighborhood kids came to get fed, to hang out, to be a part of kindness and laughter.

Culture, community, tradition, and ritual came in a variety of expressions and practices in our family.  We had homemade piñatas in the 1970’s in Pennsylvania – a feat in itself.  We were the only Martinez in the phone book.  My dad was six-foot, two hundred-plus pounds and an ex-Marine.  My mom stood tall at four feet ten inches and was a spitfire.  In regular intervals, she talked about her family roots being Pennsylvania Dutch, which heavily influenced the stuffed cabbage or holiday pig stomach meals and grandly provided pies, cookies and scrumptious baked goods.  She even made some awesome tortillas and every year, with my dad, we rolled out hundreds of tamales.  We know, food is feeding, food is gathering, food is sharing, food is ritual and food is kindness.

My dad’s influence in these culinary delights that also included fried bologna, enchiladas, and a heaping garden of fresh vegetables, came from his southwest ancestors who were relocated to Texas.  My paternal grandmother was Mescalero, Apache and born in 1899.  My paternal grandfather was Chiricahua, Apache born in 1897.  The years of their birth are estimates since birth certificates weren’t part of either of their communities.

Growing up, and well into my adult life my parents embodied a kindness and laughter that has blessed my relationships, teachings, and engagements.  Significantly, this kindness and laughter has been reinforced continually in various encounters, meetings, activities, and friendships I have developed in Native communities and with Native peoples.  Also, on numerous occurrences, these attributes have been experienced by others and regularly mark non-Natives’ experiences with Native encounters and engagements.

These Indigenous principles and beliefs of kindness and laughter are ritualized and practiced in specific customs such as give-aways and throws.  They are also practiced in less formalized commitments and expressions such as responses to admiration.  I want to offer two examples that embody this kindness and laughter that are central to Indigenous communal ways of living.  These examples both happened to me and revolve around jewelry other Native friends wore, and that I admired.  I offer these examples to illustrate an every-day practice of beliefs.  Years ago, Carolyn a Winnebago friend who was living with me temporarily was wearing a watch.  It had a buffalo design in the watch-face, a nice leather band and the numbers were etched in an artistic highlight that struck my attention.  I mentioned to her that it was a nice watch and exclaimed that I thought it was pretty cool since it was somewhat unique. Shortly after I had offered this praise, she told me she was taught in her ways that when someone admired an item in the “right way,” you were expected to give that item to that person.  And then she gave me her watch.  I of course accepted the offering, as I was taught was respectful, and said thank you.  A few days later Carolyn and I were riding into town.  She looked at my wrist and stated, “You don’t wear watches.  Do you?”  I sheepishly said, “No.”  Then in a light-hearted teasing manner she told me to give the watch back.  I chuckled, reached into my workbag and gave it back to her.  She teased me about being Apache, being able to read the sun, and being sneaky by getting a watch when I didn’t even wear them.  Later that evening, I went into my room and placed on my pillow was a set of deer bone earrings.  The kindness and laughter of the exchange still resonates in my life.

Then a couple years ago, I went to the office of Jill, a Penobscot friend.  We had been working on an Indian Child Welfare Act project.  As I came in front of her desk, I saw she was wearing a very stunning new silver bracelet.  I was drawn to the bracelet’s simplicity and boldness.  I said I really liked it.  She quickly flung her other hand over the bracelet, seeking to cover it up.  She said somewhat jokingly but quite assuredly, “Don’t admire it too much.”  She also stated, as Carolyn did, that she was taught to give an item away to someone who admired it appropriately.  She continued and mentioned how she was wearing the second purchase of that same bracelet since she already gave one away to someone else who had admired the first one she bought.  She then proclaimed that she picked up the bracelet at Kohls’ and was struck that such a bracelet received such adoration but that she wanted to keep this one.  I was smiling and laughing.  I loved the laughter within the exchange.  I loved the ritual that reflected the friendship and traditions of our cultures.

Both these examples demonstrate how traditions and rituals are lived.  They are movable, flexible, contemporary, and grasp an essence of relationships that are at the core of communal beliefs.  I recall once when Debra, an Omaha friend, of mine commented, “If you ever feel like you don’t have anything or you feel down and in want, you need to feed someone.”  Kindness is an answer.  Kindness is at the forefront.

These few anecdotes are concrete examples of numerous occurrences of kindness and laughter.  I know that the watch and bracelet examples above may reflect a “check-balance” regarding materialism.  However, if you only see it within capitalist paradigms you will miss the foundation of sharing, giving, and kindness that is central to communal beliefs.  Teasing, reflected in the coyote trickster and Native clowns, regularly occurs and reinforces humility.  Yet, teasing facilitates, nurtures and spreads laughter and a certain type of laughter.  You are cared for when someone teases you).  My dad’s  teasing embodied in his cane was about his caring and his love.  I remember a childhood friend said that she remembered my dad “because before it was cool for dads to play with kids, your dad played with kids.”  All six foot, two hundred puonds, ex-marine parts of kindness.  I also fondly recall the stories of my mom racing her motorized wheelchair from her apartment complex to the post office – racing with laughter.  I therefore know that communal beliefs span cultures.  My decades of living have reinforced that the communal beliefs of Indigenous Peoples perpetuate kindness and laughter as tradition and ritual.

--Doreen E. Martinez is an ethnographic researcher and trained Sociologist. Her work centers on cultural beliefs, traditions, and how people make meaning of knowledge.  Besides being an assistant professor, she is the Director of Culture and Community with the Native American Sustainable Housing Initiative (NASHI) at the University of Colorado.