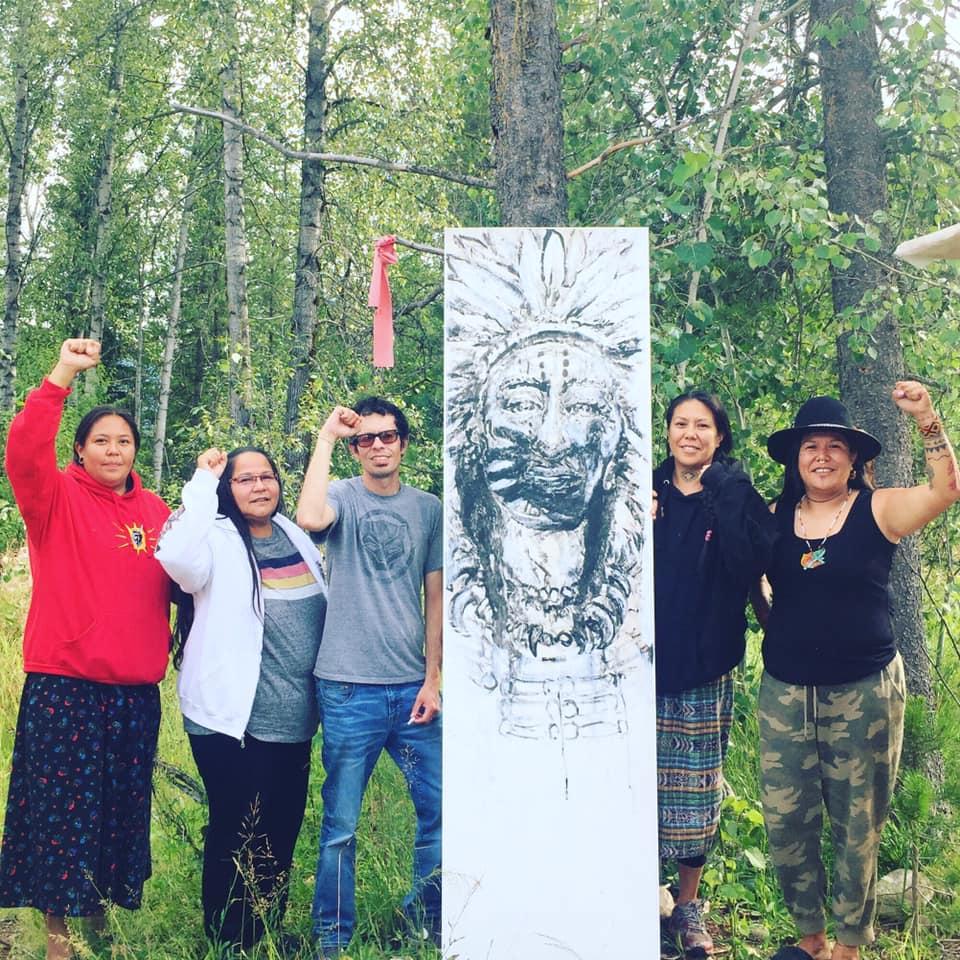 (Unceded Secwepemc Territory / Blue River, BC) – At 9 a.m. on October 19, 2019 Kanahus Manuel and Isha Jules of Tiny House Warriors were arrested on Highway 5. They had stopped to tell construction workers they had no Secwepemc consent to flag in preparation for roadwork. Police arrived on the scene and within minutes arrested Manuel and Jules for the crime of “bugging.”

A bail hearing will be held for Manuel and Jules in the Kamloops courthouse at 455 Columbia Street at 9:30 a.m. Monday October 21, 2019. The family is calling for people to come to the courthouse to show their support.

Manuel communicated this charge via social media post from the back of a police van, reporting that she was “slammed to the ground” by the RCMP that morning.

Manuel and Jules were staying nearby at a camp they built with the Tiny House Warriors to protect a river crossing from the proposed Trans Mountain pipeline. They also live at Blue River, located further south, a Tiny House Warriors camp that blocks construction of a man-camp they warn will threaten Indigenous women, trans, and Two-Spirit people in the territory.

Manuel and Jules were taken to the Clearwater police station, around 200 kilometers south from where they were arrested, where police refused to allow their lawyer or family to see them, claiming the station was understaffed. Their transport without access to legal counsel is an egregious Charter violation. When asked by their legal counsel why they were denied rights given even to murderers, an RCMP officer advised that it was necessary for “officer safety” as they did not know who could be waiting for them “in the bush.”

Defence counsel was not permitted to see Manuel or Jules for five hours. Initially, counsel was told this was because RCMP did not have the manpower to facilitate a visit. Later – almost 10 hours after the arrest – he was called from an ambulance transporting Manuel to the Kamloops hospital (130 kilometers south of Clearwater) for injuries to her wrist sustained during her arrest. Her lawyer had been kept waiting in Clearwater by police under instructions that he would be able to meet with her there. Shortly after placing her in an ambulance, RCMP added a further charge of intimidation for her and Jules to the first charge of mischief.

Though family attempted to visit the Royal Inland Hospital in Kamloops once they learned of her whereabouts, eight police officers and hospital staff would not allow them to see her. Manuel could only communicate by shouting to family: “Tell mom I was in a lot of pain all day and they would not bring me to hospital.” In response, her mother Beverly Manuel stated, “The RCMP are dangerous and I am concerned about my daughter and son-in-law’s safety, and outright angry with the RCMP for treating her so violently. We have occupied our Secwepemc Homelands forever.”

When Manuel was discharged from the hospital she remained in RCMP custody. Unusually, police did not contact Crown counsel at any time during the day, who could have consented to Manuel and Jules’ release on a promise to appear. Instead, they waited until 10pm at night to seek their remand in custody until Monday morning. This is very irregular as people with much more serious charges and extensive criminal records are routinely released on a promise to appear and conditions.