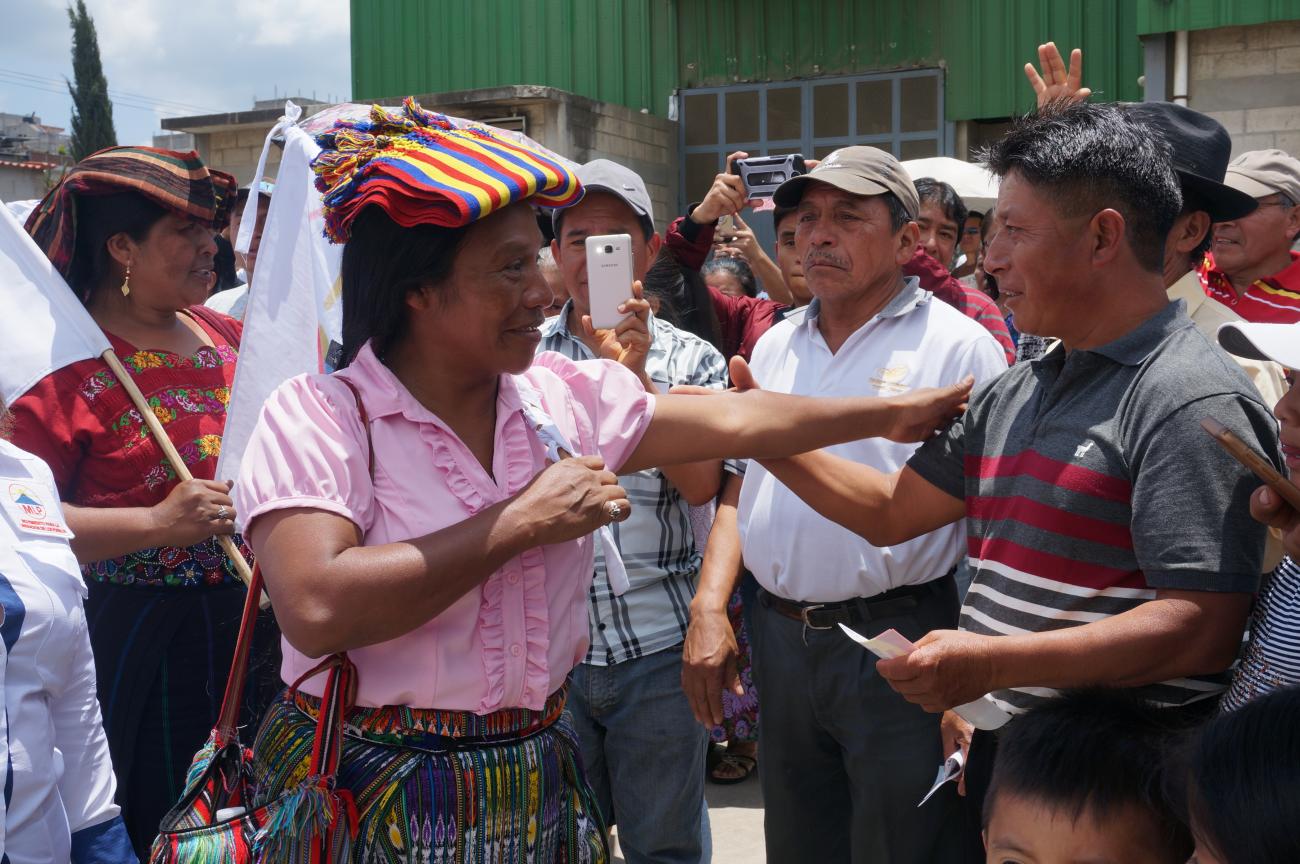 "My name is Thelma Cabrera Pérez, I am a defender of the rights of Indigenous Peoples and of Mother Earth, I was elected by an assembly of communities to be a candidate for president," says Cabrera.

Thelma Cabrera Pérez de Sánchez (Maya Mam) is 48 and originally from the department of Retalhuleu. She is a descendant of a campesino family and has been a defender of human and Indigenous Peoples’ rights for more than 25 years.

Cabrera for many years has been an active member of the Peasant Development Committee (CODECA) and the Movement for the Liberation of Peoples (MLP), important organizations of Indigenous campesinos who have repeatedly requested the resignation of the current president of Guatemala, Jimmy Morales, whom they accuse of perpetuating corruption. In addition to promoting rural development through social participation, CODECA works towards inclusive and participatory processes for social transformation, peace, and democracy. Started in 1992, CODECA was born from a need for people to live with dignity and cultivate their land. Ninety-five percent of CODECA member families are campesinos that work as laborers on farms or migrate in search of work in different places. The Movement for the Liberation of Peoples (MLP) emerged as a political instrument of CODECA who proclaimed and elected Thelma Cabrera as a candidate for president of Guatemala. 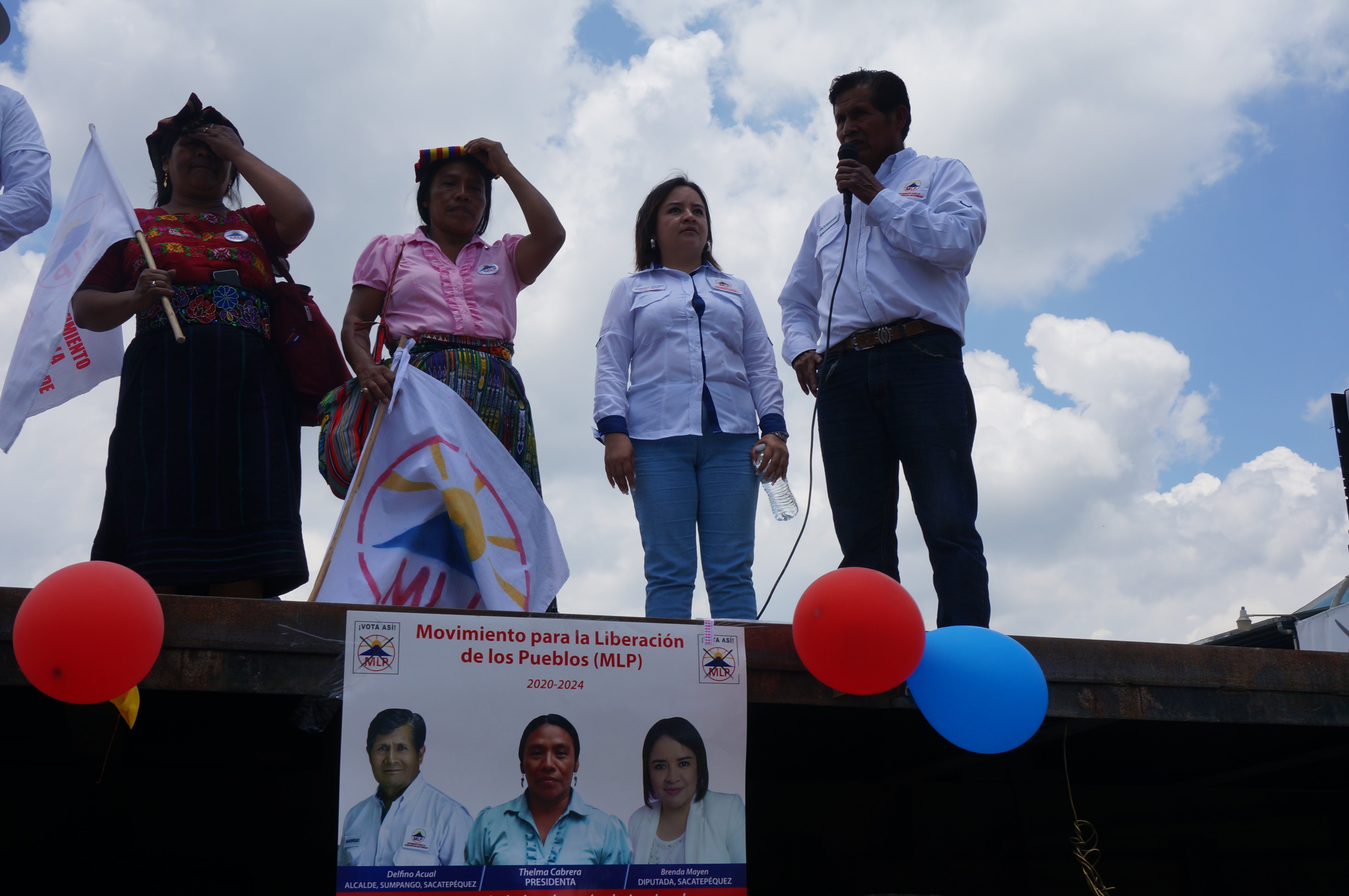 What motivated Cabrera and how was she chosen to be the representative of Indigenous communities? "For many years we have been living our realities and this has made us define and trace our path towards the process of popular and plurinational constituent assembly, before a failed state. As peoples, we organize to defend our collective and individual rights, but we are criminalized, imprisoned, and murdered. That was the reason why I was chosen for this mission. I was elected in assembly for president by the Movement for the Liberation of the Peoples. There were several consultations, there were many proposals and debates from various communities, and the final decision was that I become the candidate for the presidency," says Cabrera.

Once Cabera had complied with the community process for her candidacy, she had to comply with the regulations established by the government and the Supreme Electoral Tribunal of Guatemala, which she did without any obstacles. Cabrera is a freely exercising her candidacy since Article 136 of the Constitution of the Republic of Guatemala indicates that: “The rights and duties of citizens are: b) To elect and be elected; d) Opting for public office,” and Article 212 of the Electoral Law and Political Parties on the Nomination and Registration of Candidates indicates that, “Legally recognized political parties may nominate and register candidates for all positions of popular election.”

For Cabrera, as an Indigenous Mayan woman, she has lived in a country dominated by capitalism, oligarchy, corruption, patriarchy, and, above all, discrimination. The government has been run by the wealthy, so much so that currently, Indigenous women have less than a third of representation in the government. Machismo and stereotypes take precedence in the country claiming that "illiterate Indians" are not capable of governing a country. The Movement for the Liberation of Peoples during its campaign stated that within its plan, its priority is to focus on health, education, community media and recovery of privatized public services such as electricity, in order to provide collective well-being for Indigenous communities.

Cabrera is in competition with twenty one (21) candidates among those are:   Alejandro Giammattei of the VALUE party; José Luis Chea Urruela from the PRODUCTIVIDAD Y TRABAJO party; Sandra Torres of the UNIDAD NACIONAL DE LA ESPERANZA party; Pablo Ceto of the REVOLUTIONARY UNITY GUATEMALTECA party; and Benito Morales of the CONVERGENCIA party. With so many opponents how can Cabrera win the presidency? "Our sisters have arrived at the moment when the people have to choose dignity. I call for reflection in order to recover our lands, territories, and waters. Because the people are the ones who are going to govern and are going to have to participate, it is not just Thelma Cabrera. I did not ask for any position but it is the people that chose me and with my people I have to be, with my people I have to go, with my people I have to consult, propose, and agree,” says Cabrera.

Cabrera has a strong and clear message for women and Indigenous communities around the world. "That all the peoples in each country of the world, self-determine the good living for our future and the future of our sons and daughters. We deserve a life with dignity, and all people have the right to access Mother Earth, to decent health, education, food, life without violence. All people have the right to live where there is harmony between peoples and different sectors, where there is access to decent roads, where there are towns and territories, not pollution. Let's move forward, we have to make these structural changes for the good of our peoples.”

General elections will be held in Guatemala on June 16, 2019, to elect the president and representatives to Congress, with a second round of the presidential elections to be held on August 11, 2019, if no candidate wins a majority in the first round.