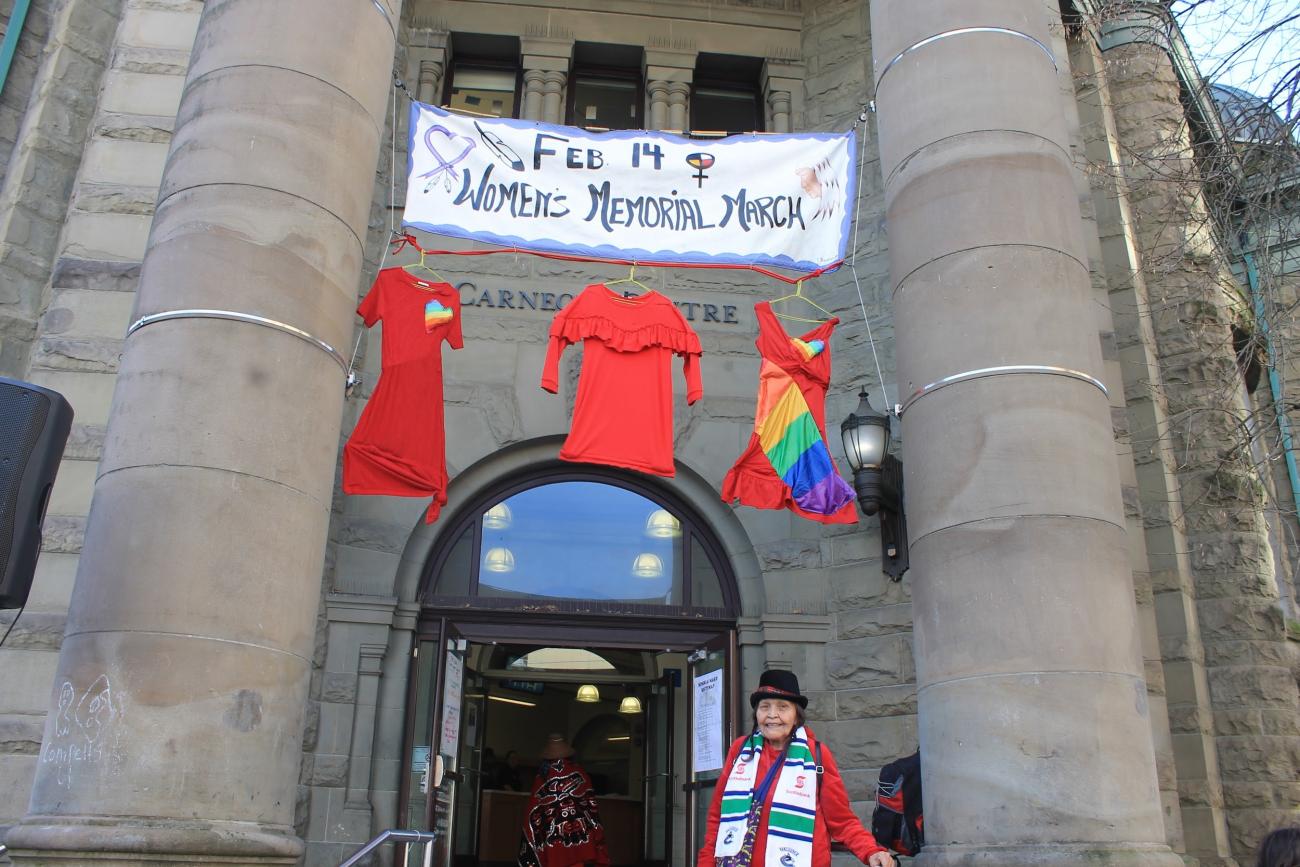 On February 14, 2020, over a thousand people gathered in Vancouver, Canada’s Downtown Eastside to participate in the 29th Annual Women’s Memorial March to honor all the women who have gone missing or have died due to economic, physical, mental, emotional, and spiritual violence. The march takes place on unceded Coast Salish territories. A private family remembrance occurred before the march where no media nor public was permitted out of respect for those grieving.

The march started at noon between the intersections of Main and Hastings Streets. Drumming and voices of women singing the Women’s Warrior song could be heard in the distance as family members, relatives, and elders stepped out into the street to commence the opening ceremony. The smoke of sage traveled through the people in preparation for the march. Family members held images of loved ones and a banner of 96 pillars, stretched across the street. A circle was formed where people held hands to protect survivors. Members and chiefs of the Musqueam, Squamish and Tsleil-Waututh First Nations were also present. The opening ceremony began with a prayer to the four sacred corners starting with the East, West, South and North and ending with the sky where everyone in unity raised their hands with gratitude to thank the Creator. Drumming pulsated through the crowd to initiate the walk along a route paved from previous marches to pay respect to the women. At certain sites, elders held smudges and placed roses for every missing woman or victim of violence. Eagles sorrowed overhead greeting the crowd. 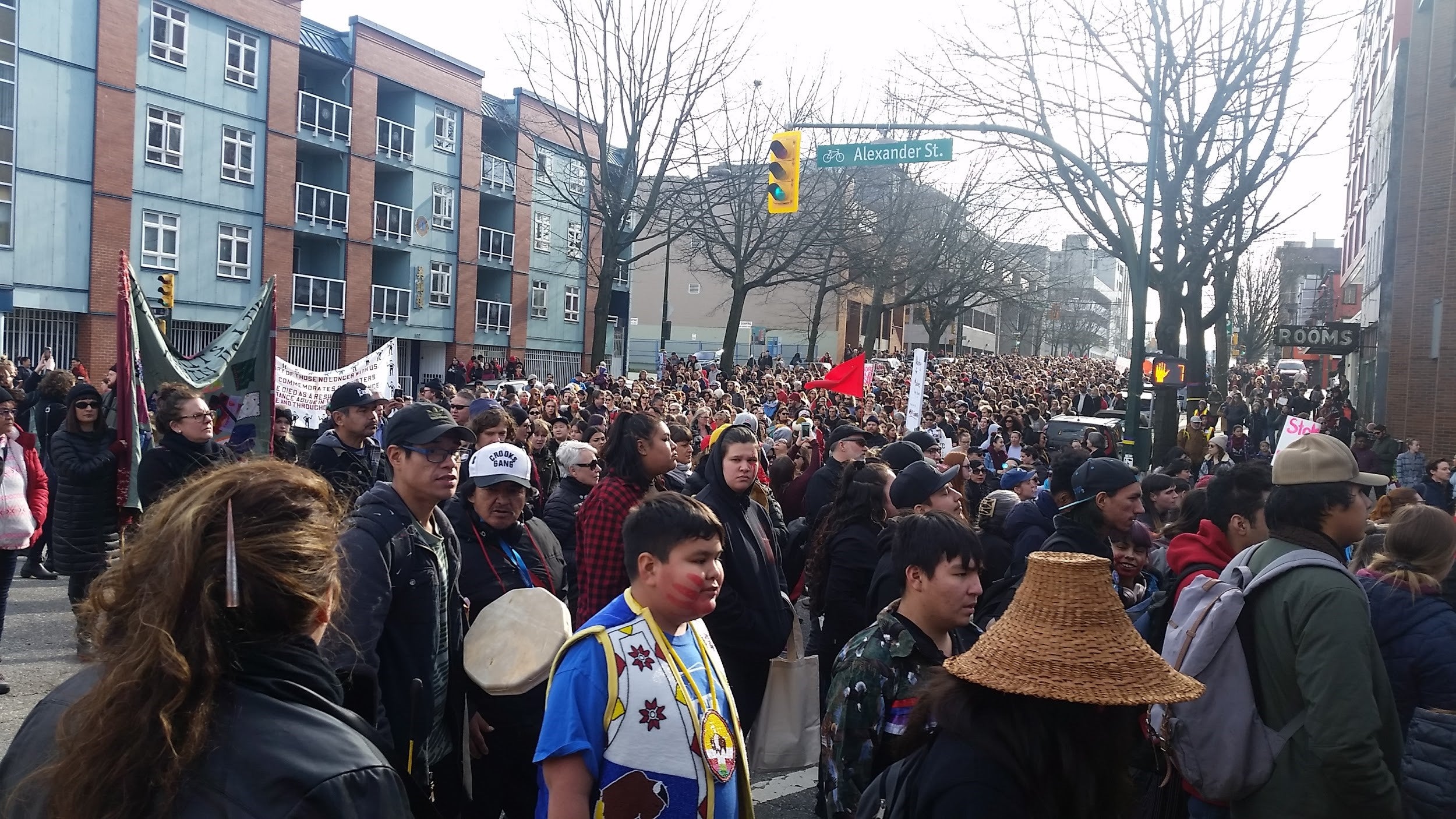 For many, the march symbolizes strength, power, and healing to raise awareness on this epidemic issue. It is a moment where many people from all walks of life stand together, in solidarity to commemorate the lives taken of loved ones. Each life has a story.  “My grandmother is part of the missing and murdered Indigenous women so I am here to honor her. I can go missing and I feel that nothing will happen. I feel the RCMP need to step up their game. People need to know how to look at Indigenous people, how our marches are and need to respect it instead of being disrespectful,” stated Destiny Barton (Haisla and Nisga’a).

Lilian Howard (Nuu-chah-nulth of Vancouver Island) marches to commemorate her two aunties and to bring awareness to the epidemic of missing and murdered Indigenous women. She states, “I have been participating for about 12 years. A lot has to do with issues of racism and the target of Indigenous women. Racism from society but also institutionalized racism where a lot of our Indigenous women fall through the cracks where there is a lot of violence against Indigenous women. We are not going to give up and really need to have the health and justice system involved in addressing the issues with Indigenous communities. Globally the target is Indigenous women whether it’s in central, south America, Africa, India, or northern Europe. I would like to ask people to begin to understand the truths of colonial impression and historical trauma of Indigenous people. Canada has a really dark mark in its history in relation to people, land and resources. We are not in the spirit of reconciliation.” 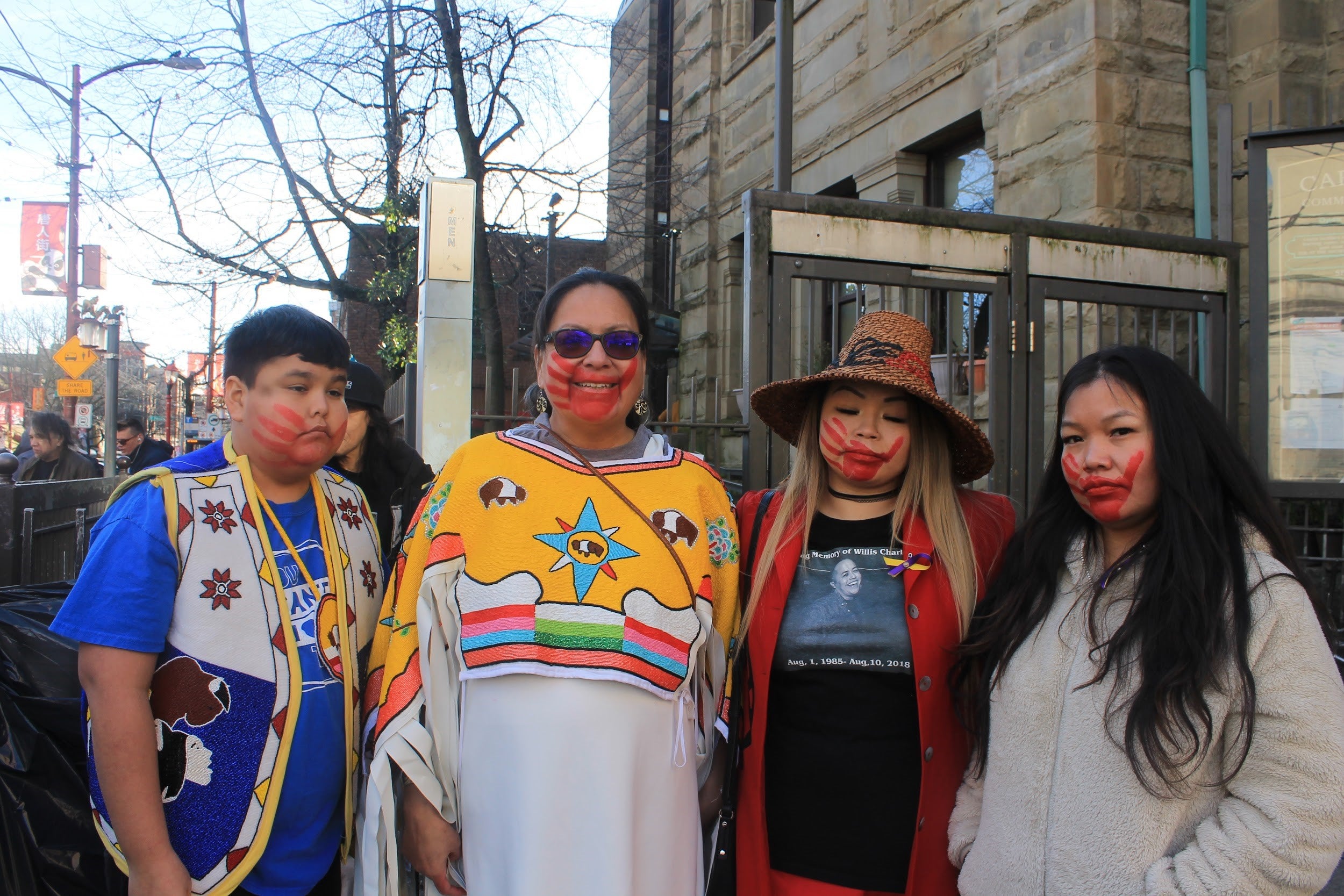 It’s been 29 years since the first march was held in 1992, when a woman's body was found on Powell Street. In respect to family members, her name is no longer publicly mentioned. It was ignited by anger, hopelessness and frustration  from a catalyst of incidents. Women began disappearing as early as the 1970s in the Downtown Eastside, any inquiry to the police at the time was ignored. The march intends to bring hope and compassion for losses of loved ones, as an outlet for healing. The early marches in the 1990s only brought a small handful of women who faced discrimination from local citizens. Objects were thrown at them for marching. However, with the persistence, women continued to vocalize their concerns and organize and the march has become one of longest annual marches and a national wide demonstration.

The systemic violence against women is the result of the systemic colonial attitudes and violence towards Indigenous women. Though the march focuses on the missing and murdered women, the march also honors the lives of women taken from homelessness, poverty, overdose, or with lack of proper medical care.  Most women in the Downtown Eastside get lumped into one category and become invisible to society. It is important to acknowledge their stories. “My mother Tina James passed away 8 years ago in the Downtown Eastside, she didn’t go missing or was murdered by anyone but I’d like to think that she was murdered by colonialism because she struggled with her traumas and her addictions. I march in honor of her as well as my dad’s wife. My step mom lost three of her sisters who were murdered, so I also march for them. We are here, we stand with them and we stand with the family,” said Linda James (Kwakwaka’wakw). 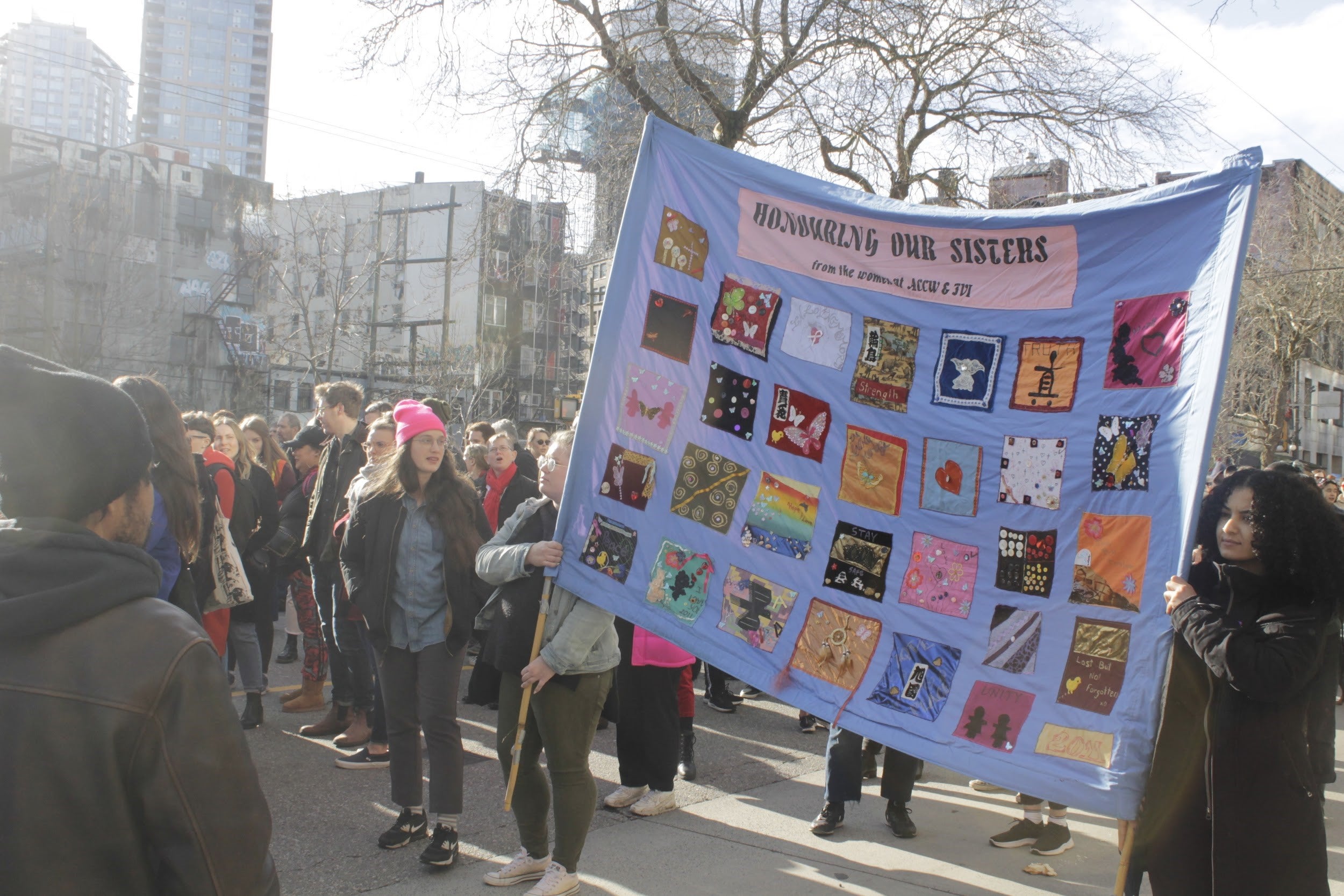 The Downtown Eastside is one of the oldest neighborhoods in Vancouver that connects with Chinatown and Oppenhiemer, a district home to Chinese, Japanese and Indigenous people, where a common safe ground can be found. Those who faced discrimination and racism by society during the 1950-1970 found commonality here. Today, it is one of the most impoverished postal codes in Canada, where approximately over 16,000 people reside within 2-square miles. The homelessness has increased significantly due to the gentrifying impacts of urban development, where lack of safe and affordable housing has become a crisis for residents. The neighborhood is also plagued by the drug  and sex trade and there is a high rate of people affected by Hepatitis-C and HIV. This has created stigma and discrimination towards the people residing in the Downtown Eastside leading to their marginalization and isolation from the rest of society. The women survive and endure imaginable conditions. 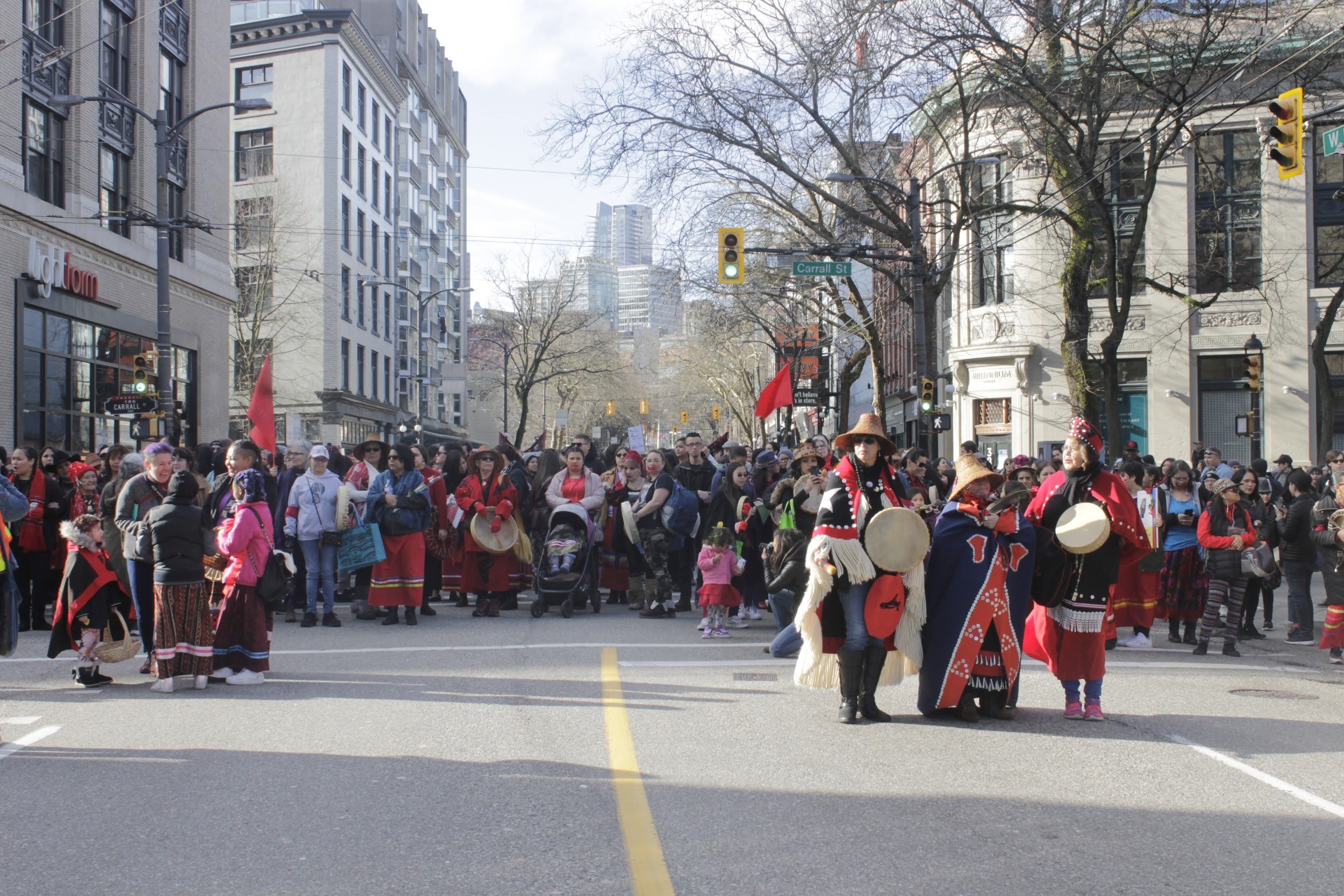 To understand the lives and resistance of these women is to understand the historical and systemic nature of colonialism of the country. Indigenous women, in particular, continue to go missing or are murdered at a higher rate than non-Indigenous women. Violence against Indigenous women today cannot be understood unless one examines the impacts of settler colonialism, cultural genocide, and forced displacement of land. There is this stereotype that Indigenous women are promiscuous and are seen as objects with no human value beyond sexual gratification. These assumptions and beliefs have developed since First Contact where many Indigenous women were abducted and taken abroad by colonial settlers. This history has led to ongoing racialization and sexualization of Indigenous women that permeate many attitudes of Canadian society today.

The appalling number of missing and murdered Indigenous women and girls (MMIWG) has been a long battle of discussion that only recently reached national attention in Canada. Despite years of calling for justice by government support and police action, many women’s groups and national and international organizations were silenced and ignored. It was not until December 2015, when a national inquiry was initiated. In June 2019, the National Inquiry into Missing and Murdered Women and Girls (MMIWG) final report was released titled Reclaiming Power and Place. It consisted of over 2,380 testimonies of survivors and family members from 15 community hearings across Canada. “The MIWG final report declared that the violence against Indigenous women, girls, and 2SLGBTQQIA people is ‘a national tragedy of epic proportion.’” 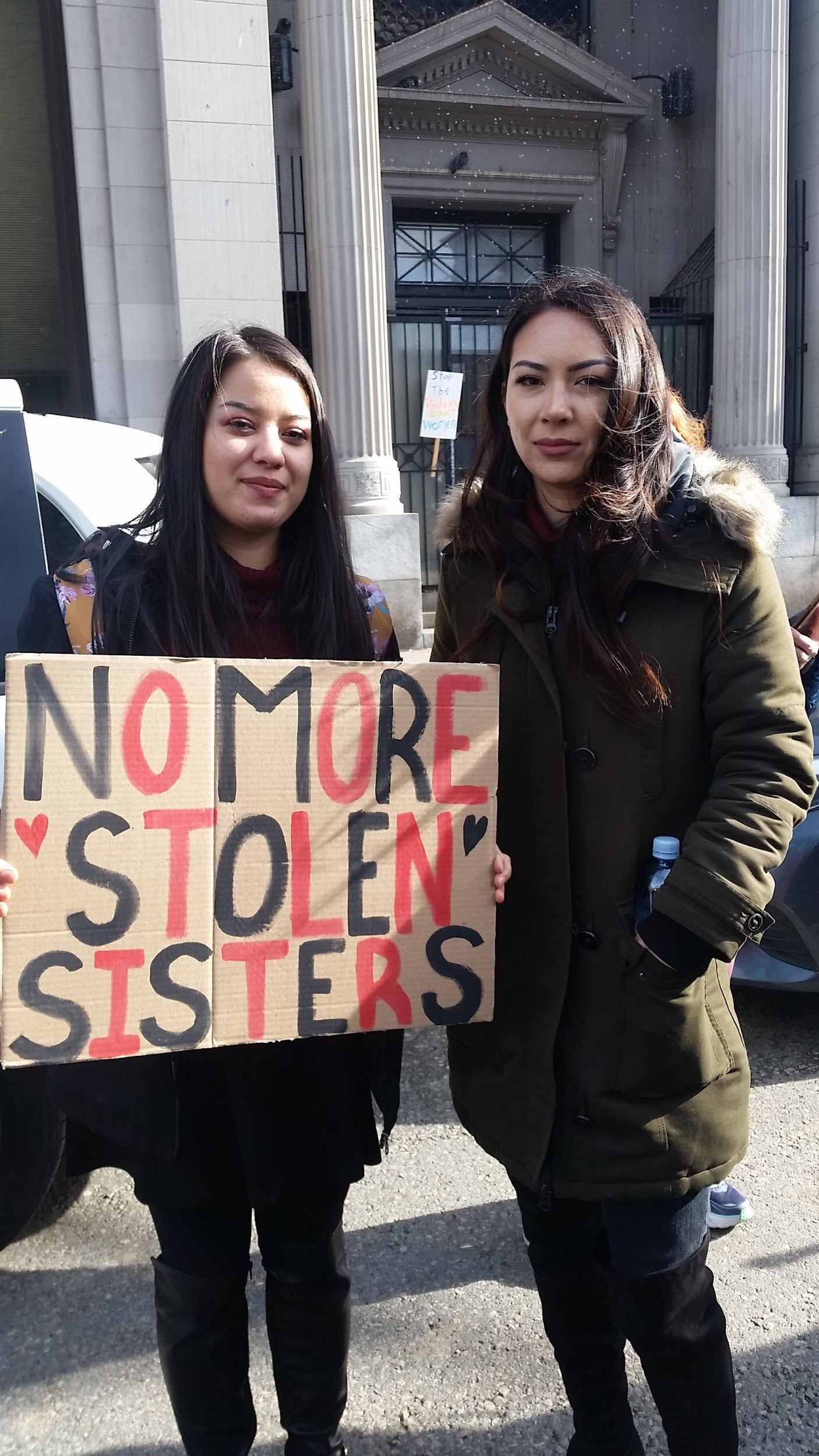 There is still disagreement on the actual number of missing and murdered Indigenous women in Canada among government and police reports and Indigenous women groups and organizations. Some estimate the number as high as 4,000 cases. The discrepancy in numbers is due to underreporting of violence and inadequate databases, as well as the failure to identify cases by ethnicity and the lack of disaggregation of data. “Despite a national inquiry being launched on missing and murdered Indigenous women and girls, the reality on the ground in the Downtown Eastside has not changed,” stated the Women’s Memorial March Committee, founded in 1992.

The Committee continues to organize the annual march with great efforts to heal the grief of losing loved ones. The Women’s Memorial March is a reminder of the work that is still needed in addressing violence and abuse against Indigenous women. Each year it becomes larger, giving more power to the people in restoring the sacred feminine.

Galina Angarova (Buryat), Cultural Survival Executive Director stated, “Today, we live in a world where the masculine and the feminine are out of balance. This imbalance is manifested in how we relate to each other, how we run our governments, how we raise our children, how we conduct business. Because the sacred feminine has been degraded, attacked, and violated, we are facing the consequences of this imbalance - injustices, gender and racial inequality, poverty, and climate change. We need to restore the equilibrium between the masculine and the feminine.” It takes a global community to bring forward this change.