State Dissipation and Depravity in Guatemala: Indigenous Peoples' Autonomy and the COVID-19 Crisis 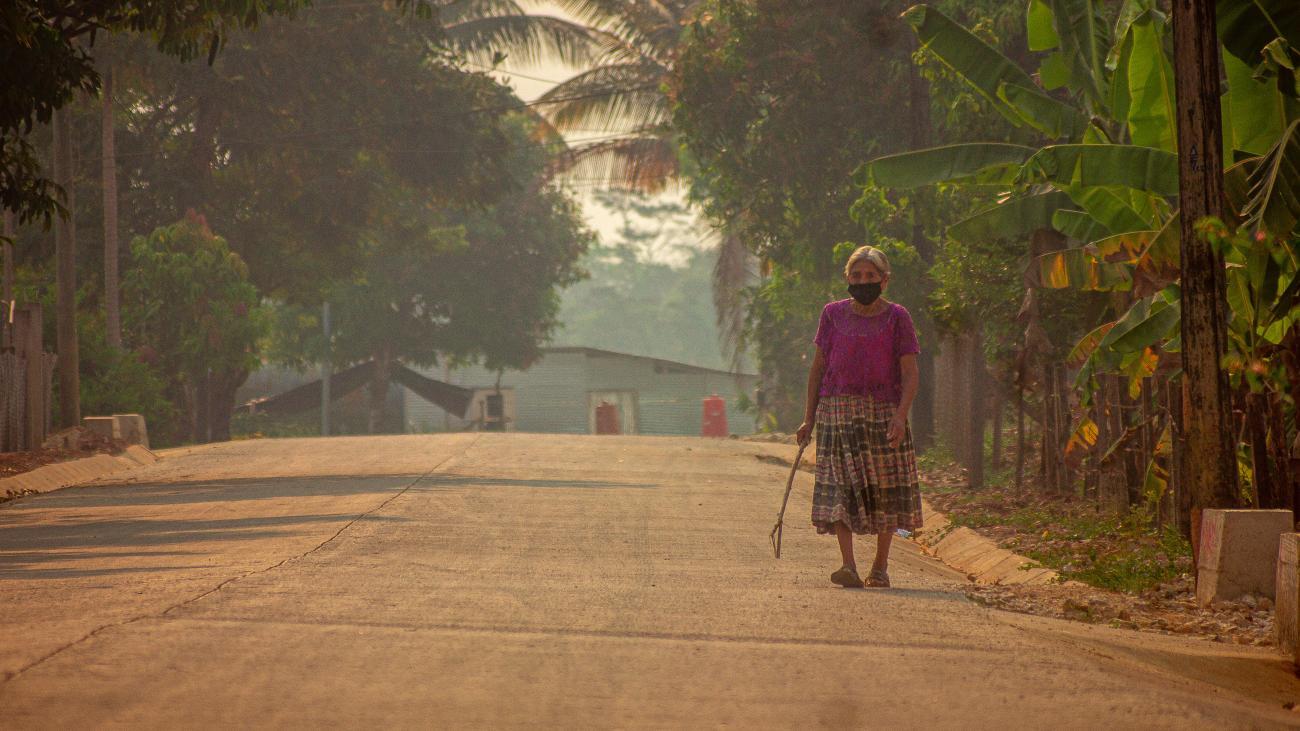 Economic and social inequalities in all countries have surfaced because of this chance event, COVID-19. Latin American regions, not close to the epicenter of the disease, were infected, specifically, by those with the privilege of travel to foreign countries. Guatemala's government, aware of the risks, had time to bolster sanitary measures in its on national airport and along the country's borders, but it did not take immediate measures. The government, like some travelers, did not act responsibly nor with sensitivity to what they could be introducing into the country.  Searching out all passengers on the same flight with the first contagion carrier, in order to confine them to quarantine, did not begin until after the first reported COVID-19 death.

Egotism and individualism thrive in a precarious and weak Guatemalan government servile to entrepreneurs.   Their donations are gratefully received in exchange for benefits, specifically, fiscal privilege.  Without respect for the secular society, the government would have the populace believe that the situation depends on God rather than on the hard work of public institutions. The result is policy adulterated by religious faith.


Historically, Guatemala's healthcare system has never been prepared nor stocked supplies in order to attend to its people's needs.  Moreover, this has been a particular problem for the last 45 years in Indigenous communities. The COVID-19 crisis puts to test the government's policy with regards to providing for its Indigenous citizens.  And clearly its prevention and containment campaigns do not include relevant cultural focus, rather, on the contrary, these campaigns have been classist and racist.

Paradoxically, Indigenous  Peoples have dealt with and survived epidemics not of their making, as well as contending with other types of "viruses" such as colonialism, imperialism, patriarchy, fundamentalism, racism and the country's oligarchy. All have dispossessed them of their ensemble of systems and ways of living, their land and territories. And their rivers and lakes have been contaminated. They have been denied their universal right to water which currently is necessary for constant handwashing to prevent the virus. Struggling with these problems does not mean that the normal for Indigenous people is to have to align themselves with the politics of annihilation or invisibility promoted by governments and imperialists. More accurately, it is a recognition of resistance and struggle for the life and the survival of First Peoples.

To counter this crisis the government has suggested long-term preventative economic policies, funding which supposes safeguarding "financial stability" and tax shelters for the business community in order to not "disincentivize" the national economy. Nevertheless, that national economy they talk about, is only for entrepreneurs who dominate the country, making invisible and ignoring the informal sector, i.e. the small businesses, besides ignoring other economies such as those of Indigenous Peoples, of families and localities and many more.

According to the 2019 Employment and Income Survey (ENEI Spanish acronym), 31.9 % of the total population works in the production of raw materials and 26.9 % is working in the commercial enterprise; these being the areas where slightly more than half of the total population is employed.  Of these more that 4,000,000 people survive through self-employment in agriculture, commercial businesses or in a variety of service jobs.  In the world of "informal" there are 700,000 children who work in the informal sector, in addition to adults and pregnant women (ENEI 2018, ICEFI 2018, CENSO 2019).  A majority in the informal sector will not benefit from recently announced government programs to help alleviate the crisis because they do not pay taxes directly to the Treasury.  That is the rationalization for not taking them into account and rendering them invisible.

Those who do not sustain themselves through the informal sector, in order to survive, to generate income, through activities that are not well compensated, are the ones looking for work by migrating to the US and sending back money which supports the country.  In 2019 more than $ 10,500,000,000 i.e. almost Q 81,000,000,000 came into Guatemala as remittances.  An amount that is almost Q 67,000,000,000 above what came into government in 2019 in the form of taxes, not even taxes plus royalties.  These remittances directly assisted families in poverty and indirectly injected money into the national economy.

Healthcare, food and employment security are not prioritized for Indigenous and rural people, in spite of their economic contribution, through food production and conservation of the environment, all important parts of the economic structure of Guatemala. The custodial and centralized character of the government makes it so there is not direct communication with the indigenous communities. Those same people through their ancestral wisdom make up for the lack of support. Currently, for example, mid-wives and healers assume responsibility for disseminating information and taking action to confront this pandemic before its likely transmission.

For that reason, moving forward the current political posture ought to be one of restoring the communities' ancestral medicine:   policies in accordance with Mayan practices and cosmologies, that worldview which understands inter-relations between the human body and nature.  It's necessary, indeed urgent, to rethink actions from a point of view of complementarity where the ancient wisdom and collective logic of First Peoples are recognized.  Where life, not just the economic, is prioritized.  Such logic should not only be adopted in times of crisis.  It ought to be established as a way of living.  First Peoples have taught us throughout history that their ways of living maintain an active cultural heritage in their communities.  They are innovative, creative ways.  When we consider the Mayan practices and cosmology which come from our grandparents, we understand that our grandparents are the living books of the First Peoples.

Furthermore, the right to food is also significant.  If land distribution were more in accordance with the needs of rural and the Indigenous people who produce food, the food chain, i.e.  sequence of events in food production and consumption, would create adequate interrelationships for the commerce of foodstuffs, which would result in a better connection between the rural and the urban.  And similarly, but obviously after resolution of this health crisis, such a transformation of the labor market could avoid large scale unemployment of those who are self-employed. All said, it is important to not lose sight of women, specifically Indigenous women whose labor rights historically have been transgressed.  And in this crisis, many who already are burdened as domestic workers are being required to work.  And after long and strenuous workdays they go into quarantine with no basic rights, obligated to be separated from their families.

When President Alejandro Giammatti took measures to counter the crisis, he ordered isolation, curfew and restriction of some public services (transportation) and that also impinged upon workers' rights, especially those of women and men from the rural countryside. Their means of getting to markets is this method, public transportation.  Market activities guarantee sovereignty of and food security in communities--and food supplies for the entire country.  The work of all Indigenous, rural people has been under valued in spite of their sacrifices. So, a situation of imposed poverty coming out of the free market economic model has merely created inequality.

The government has treated Indigenous communities through exclusion and callousness, not only during this pandemic, but also in many other times. Now the government must respect the strategies and operations the communities have decided to implement to prevent and contain the virus. Just as it must also learn to value the organization and solidarity among First Peoples. We will go forth struggling to defend our lands, our territory and autonomy.  And we will resist as we have done for so many years. At the same time, the government should begin to formulate public policy, projects and programs to guarantee, as required by the constitution,  well-being for the Peoples who historically have been excluded:  the Maya, Xinca and Garifuna.

Editor's Note:  On May 14th, 2020, Guatemala began an almost complete shut-down of operations until Sunday, May 17th. The president ordered regulations permitting that only essential services personnel could leave their homes, e.g. those working in food supply, healthcare and communications. For three days the public has only been allowed to shop in nearby neighborhood stores from 8 a.m.-11 a.m.  During a radio interview today on the program "Primera Hora en Emisoras Unidas", he was asked what would happen to people who don't have enough groceries at home and live where there are no neighborhood stores nearby. He commented that everyone in Guatemala has a store near his/her home, although perhaps in some neighborhoods or condominium complexes there may not be nearby stores.  Then he asked to be pardoned for that fact. He made no mention whatsoever of rural families, nor the Indigenous who must travel long distances to get to a store in order to purchase their necessities.

We are Kaqchikel Mayan, children and grandchildren of survivors of the genocide in Guatemala.  We were born in 1992 and 1993.  Our parents were refugees within their own country.  We had the privilege of growing up in a very happy family environment, yet at the same time with ethnic and political responsibilities which allow us to reclaim our individual and collective identities. We choose to enrich our knowledge through studying the social sciences at the university level.  This helped us in our work participating in various socio-political organizations and investigative groups.  Our objective is to breakdown the usual narrative and contribute to changing systemic hegemony.