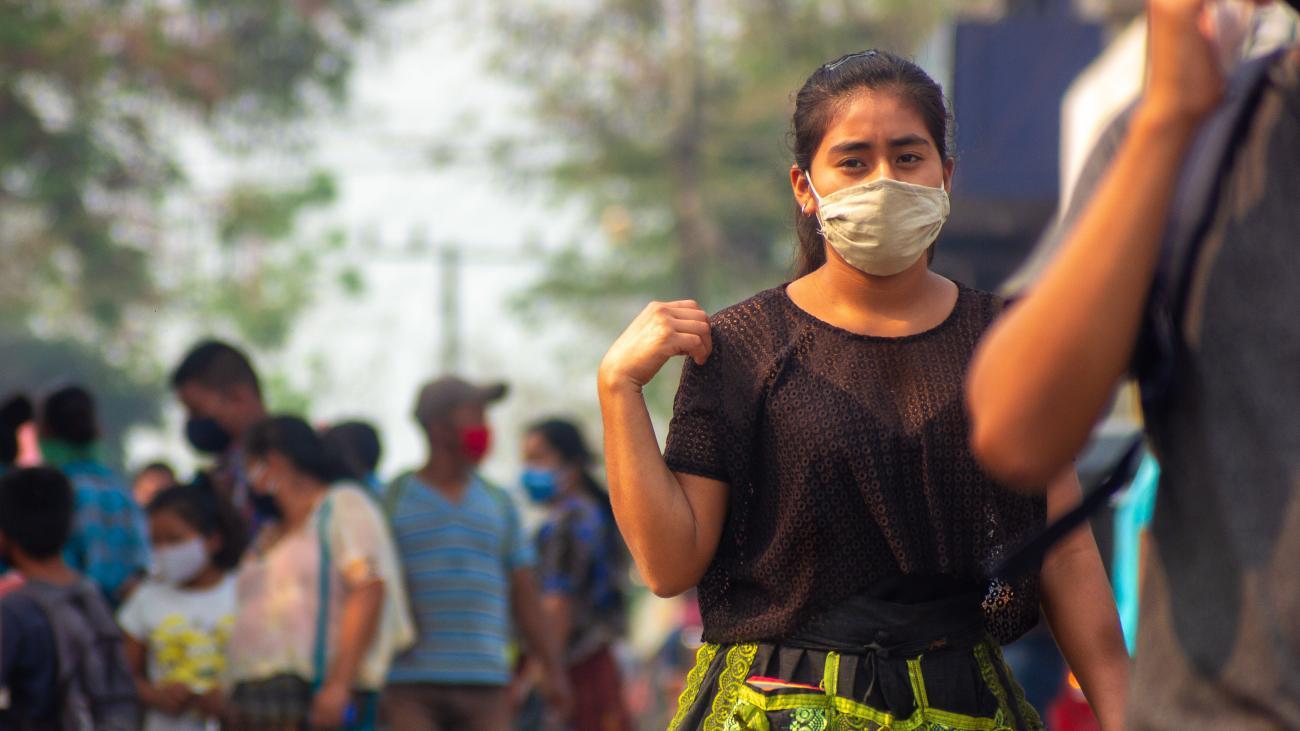 As many feared, the World Health Organization officially declared the COVID-19 Coronavirus as a pandemic. News media announced that it appeared for the first time in Wuhan, the capital of Hubei Province in the People’s Republic of China, a city with a population of approximately 11 million people. In Europe, there are hundreds of thousands of cases, and the most affected countries are Spain and Italy. The American continent is no exception: the United States tops the list of countries with the most cases, followed by Brazil and Peru.*
Meanwhile, in Guatemala, in numerous press conferences, the President of the Republic of Guatemala Alejandro Giammattei constantly reports the progression of positive cases of the COVID-19 virus in the country. The actions taken by the government to alleviate the crisis prioritize the economy of the business world, overlooking the health of the Guatemalan people. A loan of 450 million dollars from international organizations was urgently approved by the Congress. Very little of this money was directed to health. Beyond this, there are no specific emergency response plans that benefit the most vulnerable, including the Indigenous Peoples.


Recently, the president of the Guatemala vetoed the proposed law 15-2020 passed by Congress, which took measures to defer payment of utility bills, including water, electricity, phone, and internet. He argued that various articles of the decree were unconstitutional. According to the president, an improved counterproposal drafted with the advice of ministers would approve the decree, but now the basic content is the same, with one difference: it redirects forty-five million quetzals to EMPAGUA, the municipal water company of the City of Guatemala.


A few weeks ago, the president offered a 1000-quetzal voucher and bags of food to those most in need, but as of this point Indigenous communities have not yet seen this assistance. To date since the start of the quarantine (March 17th) there has been no food in many houses. Various families took to the streets with white flags signaling a call for help because they need food, medicine and support to supply other basic needs. To top it off, the president denied the legitimacy of this plea for help, calling those waving the white flags “acarreados,” suggesting that they had been brought in to participate in staged protests.


The business sector is a completely different story, at it seems to be one of the privileged classes during this crisis. For three months liability and worker’s compensation payments—including those to the Guatemalan Institute of Social Security (IGSS), Worker’s Recreation Institute (IRTRA), and the Technical Institute for Training and Productivity (INTECAP)—were suspended. Government actions in response to the pandemic were the following: a state of emergency was declared throughout Guatemala, a curfew was imposed from 4pm to 4am (now 6pm to 4am), in addition to the reduction of hours in markets and public transportation was also suspended.


Indigenous Peoples are being greatly affected by these measures. The majority of the population is stuck in their communities due to the lack of transportation and they are not always able to sell what they are able to bring to market due to the limited operating hours. In some cases, municipal authorities improvised, relocating marketplaces to far-away places, where there are very few buyers. And now the worst is coming, because those who have taken out loans for capital have mortgaged their houses or land, and now run the risk of falling behind on their bank payments.


Under the state of emergency, the industrial business sector continues to operate with special permission granted by the Ministry of the Economy. The application for this permission is designed for this sector, and has nothing to do with small business owners, who have been greatly impacted by the virus response measures. Likewise, the Congress, in addition to approving the expansion of the state of emergency, the curfew and the loans, included a safe-conduct for the movement of business people, who will not face travel restrictions with the argument that they are auditing and inspecting their business.


These actions have been applauded and praised by a minority (some of whom belong to the sector which enjoys protected State salaries, others who are close friends of the government, and others, of course, who belong to the Guatemalan oligarchy). Meanwhile, the vast majority of the population that survives on informal economic activity has been dealt a blow. They have to work somehow each and every day in order to put food on the table for their families, pay rent, and utilities such as electricity, water, phone, and other expenses. Many cannot easily move their dwellings to their places of work. A large number of business people have mandated that their workers do not miss work, other workers were fired for being unable to get to work, and others were told that they could no longer be paid.


The Labor Ministry has been inefficient, encouraging people to make claims, but calls to their published phone numbers go unanswered. In Indigenous communities, due to the lack of opportunities, many people have migrated to the city, mainly the capital. Since they don’t have a proper education, a vast majority is unable to access the formal labor market, so they have no options besides working in a tortilla factory or shop, shining shoes, selling food or trinkets, doing housework, selling lottery tickets, or in the worst cases, working in cantinas or getting involved in prostitution.


The government has opened spaces for participation only for the sector with the most economic resources. They praise the donations of those who own big businesses, and (though all support should be valued), history has been witness to the fact that to these people there is no gift given that doesn’t expect something in return. Invisible and excluded, Indigenous Peoples have been rejected despite being a vast majority of the population in Guatemala. They will not be able to contribute economically, but they have great wisdom and know the reality of their communities. Their ancestral knowledge (such as traditional medicine, experience with older people, knowledge of midwives, agricultural techniques based on the lunar cycle, and their own methods of organization), can play a decisive role in the prevention of COVID-19 in their territories. By communicating in their own languages and with their own values, they would have been able to contribute to the prevention of the pandemic, but this is not the priority of the government. The effort to develop viable proposals could have started from there, the rural areas.


Loans destined to help the crisis are not destined to help the Indigenous communities. One of the only actions take in support of the Mayan People was to order the Academy of Mayan Languages to translate some informational materials about the coronavirus into the country’s Indigenous languages, and distribute them through the media, above all in social media. The materials are limited, despite the fact that there are communities which wholly speak Mayan languages. Many of these communities do not have internet and television, and they barely have electricity, if at all. People need to walk long distances for many hours before making it to the centers of their communities, and the only way many stay informed is through community radio stations on radios that sometimes only work on batteries. Ironically, as these are the only means of communication, these radios have been targeted and criminalized by various governments over many years.


The breach of communication is not the only problem. Many Indigenous communities have been dispossessed of their ancestral lands, which have historically belonged to them, and because of this they don’t have anywhere to plant their own seeds for cultivation. Thus, they don’t have sufficient food and have to go out and sell their labor as dayworkers in monoculture plantations. Others migrate, as previously said to the city, or abroad, generally to the United States. Despite this, the United States keeps sending planes of deportees to Guatemala, a high percentage of whom belong to rural communities. Unfortunately, many have come back infected with the virus. They have been placed in shelters and the government assures that it is taking care of transporting them back to their communities. Indigenous Peoples run the risk of having an uncontrollable pandemic in their communities when deportees come back, because health services are so basic or even nonexistent.


It is evident that the actions of the government are not comprehensive and respond only to its own interests and the interests of those who traditionally finance political campaigns. We can only hope this loan is used as intended. It would be devastating to hear later that the Government committed acts of corruption with these funds, and in the end, that the people would have to pay for the irresponsibility of these officials, not just in taxes but with their health, or even their own lives.

--Cesar Armando Bol Chocooj is a Q’eqchi’ Mayan from Cobán, Alta Verapaz, Guatemalag. He studies Education Administration and Pedagogy. His grandparents and parents were from a generation of conscripts for German landowners. He is a leader and organizer for the defense of mineral rights and has been a part of the National Council of CONIC and a delegate for VÍA CAMPESINA.