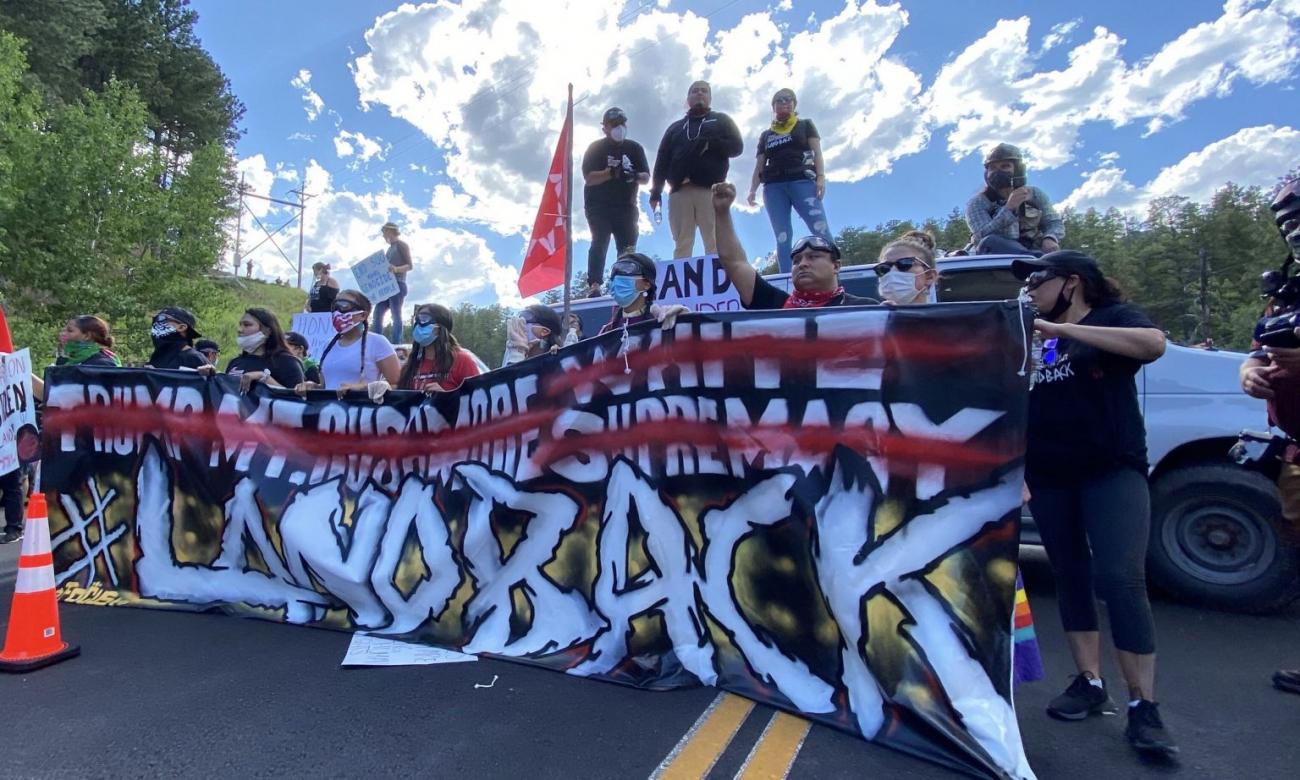 On July 3, 2020, Indigenous land and treaty defenders held protests on the Black Hills near Mount Rushmore in response to a Trump rally hosted on the sacred Indigenous land without obtaining free, prior and informed consent of local Indigenous people.

The protest was led by Nick Tilsen (Oglala Lakota), president and CEO of NDN Collective, a Rapid City, SD-based non-profit whose mission is to “build the collective power of Indigenous Peoples, communities, and Nations to exercise our inherent rights to self-determination, while fostering a world that is built on a foundation of justice and equity for all people and the planet.” The peaceful protest consisted of around 200 people singing traditional songs, road blockades, and attempts to negotiate with law enforcement.

“A lot of times over the past 500 years Indigenous voices have been completely ignored or thrust under the rug,” Chase Iron Eyes (Oglala Sioux), attorney, activist and special advisor to the president of the Oglala Sioux Tribe, told PBS. “Sometimes [protesting] is the only way our voices will be heard, is if we offer our bodies and place our bodies in harm’s way like we did at the Dakota Access Pipeline and like we will do at the Keystone Access Pipeline.”

The Supremacy Clause of the Constitution states treaties signed between the US government and Native American Tribes to be the supreme law of the land. According to the Fort Laramie Treaty of 1868, the Black Hills region, which includes what is now known as Mount Rushmore, rightfully belongs to the Lakota Sioux Tribe.

Iron Eyes said preventing the spread of the Coronavirus, even while protesting is essential to surviving as a population. Indigenous Peoples around the world are disproportionately being impacted by COVID-19. Though the state of South Dakota may not be enforcing social distancing regulations, Iron Eyes said it is the law of the Nation in reservations nearby to have health and safety checkpoints.

“This is the only way that we're going to be able to hope to survive another Eurasian plague and a lot of our European brothers and sisters [might] feel extra brave because they survived so many plagues, but we as Indigenous nations have a very direct memory of what we went through with smallpox, cholera, Spanish flu,” Iron Eyes said. “It hits us harder because we haven't been exposed to those things for that long.”

The situation at the site of the protest was escalated by excessive force ordered by county Sheriff Kevin Thom, who brought in the National Guard, National Park Service, South Dakota Highway Patrol, and Rapid City Police Department. Pepper spray and pepper balls were used on the crowds and 21 people, including one counter-protestor, were arrested.

“I’m a Native veteran, and here we have the National Guard being deployed against US citizens,” said Krystal Two Bulls, an Indigenous veteran and the founder of Voices of the Sacred. “The U.S. Military is the mechanism that upholds white supremacy and perpetuates militarism. We don’t need the military here, especially on this land, because this is Lakota territory. I’m a warrior, first and foremost I’m Oglala and Northern Cheyenne. Half of those soldiers down there probably don’t want to do this work. They have to follow orders. Deploying them on our own people, their neighbors, and community members is wrong and disgraceful. What I’m doing, in standing here for my people, that’s real service.”

The NDN Collective has set up bail funds for those arrested, many of whom are facing excessive charges.  Tilsen, who was released from jail on July 6,  is currently facing up to 15 years in prison for his participation, while others are at risk of being charged with a misdemeanor. Despite this, no officers are facing charges.

“I was arrested for engaging in a peaceful protest on land that belongs to my people, the Lakota people, and Oceti Sakowin,” Tilsen said in a statement on his release and charges. “ ‘Mount Rushmore’ was carved into stolen land, our sacred Black Hills, by a KKK sympathizer, and we demand that the U.S. government return this land to its rightful owners. The charges against me are false and driven by white supremacy.”

Tilsen said he was not surprised as the charges against him were read, given the history of the US court system being used to uphold white supremacy. The NDN Collective is asking the county to drop Tilsen’s charges and for Congress to close Mount Rushmore and open an inquiry into returning the lands to the Lakota Tribe.

Transferring land ownership to Indigenous Peoples, which Tilsen describes as “legal, moral and an absolute necessity to dismantling white supremacy,” is further substantiated by a recent court decision. On July 9, the Supreme Court ruled that around half of Oklahoma is Indigenous land thanks to a treaty between the U.S. and Creek Nation.

“Some of the biggest land managers in the entire United States right now are Indigenous people,” Tilsen said. “[Indigenous Peoples] manage, I think, well over 50 million acres currently. And Mount Rushmore is just a little bit of that. Not to mention, that’s just in modern times. We’ve been stewards of land for thousands of years, so, damn right, we can manage that land.”

Sarah Manning, NDN Collective Director of Communications, explained many Americans do not understand most U.S. Presidents had policies “devoted either to the complete annihilation or subjugation of Indigenous people.”

“Every president whose likeness is carved into the sacred Black Hills at Mount Rushmore have legacies of white supremacy, anti-Indian policies, and colonization,” Manning said. “And it’s time that America evolves and decides to lift up a different kind of ‘hero’ — one that stands for more than just colonial victories that on one hand served a white majority while simultaneously harming Indigenous people.”

However, in regards to what would happen to the monument if it were rightfully returned, Iron Eyes emphasizes it is important to keep a cool head and remember it is still an act of desecration to the natural state of the mountain if it were to be destroyed. With the goal of moving forward in this country, he says it is necessary to have frank truth-telling and reconciliation.

After being released, Tilson said in his statement he considered the protest to have been successful, especially in reminding the world who the rightful owners of the Black Hills are. One of the primary reasons this protest was held, Tilson reiterates, is that Mount Rushmore is an international symbol of white supremacy and injustice.