Seminole and Miccosukee Leaders Fight to Save Burial Grounds in Florida 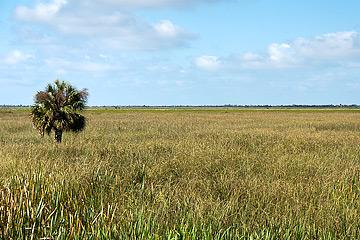 A group of Indigenous leaders in Florida, known as the Council of the Original Miccosukee Simanolee Nation Aboriginal Peoples, is trying to halt a government infrastructure project which would result in the destruction of indigenous burial grounds, after becoming aware of the plans in April, 2014. The proposed project, authorized under the Flood Prevention Act of 1954, would flood a significant portion of the Three Forks Marsh Conservation Area (TFMCA), near Port Malabar, Florida, to create a water retention and filtration area. Following standard protocol, the Army Corps of Engineers first conducted an archeological survey of the area in 2003 to identify any cultural resources which would be damaged by the plans. As a result, a total of nine different sites at TFMCA became eligible for listing on the National Register of Historic Places, three of which - Elder Mound, Platt Mound, and Lone Oak Mound - were identified as large mounds containing human remains. The human remains that were uncovered during the fieldwork were reburied on site.

Collaborating with the Seminole Tribe of Florida and the Miccosukee Tribe of Indians of Florida, the Army Corps initially agreed to construct ring levees around the three burial mounds to protect them from being inundated by 12 to 15 feet of water, but those plans were later scrapped. The Army Corps stated in a letter that “After compiling the engineering data, we have come to the conclusion that we cannot construct the levees to protect the sites from inundation,” and further maintained that what were originally thought to be burial grounds were actually prehistoric fishing locations, given the quantity of animal bones found during excavation. Although the Seminole Tribe and Miccosukee Tribe informed the Army Corps that they could not accept the inundation of human remains, they did not legally challenge the reversed decision by the Army Corps to flood the sites.

While the Seminole Tribe and Miccosukee Tribe were officially notified about the plans, the Army Corps failed to notify the Council of the Original Miccosukee Simanolee Nation Aboriginal Peoples, an indigenous group in Florida who are not federally recognized and who continue to govern themselves under their traditional laws. Upon learning about the proposed project at TFMCA, the Council wrote a letter to the Army Corps challenging the decision. Signed by Bobby C. Billie, Cecil Osceola, and Leroy Osceola, the letter read, “The Council of the Original Miccosukee Simanolee Nation Aboriginal Peoples does not want you to use our sacred (holy) aboriginal burial grounds as a dumpsite for your dirty water… Desecrating our aboriginal burial grounds with 12-15 feet of dirty water is wrong, and the removal of any aboriginal human remains and belongings violates domestic laws, international laws, and the Creator’s Natural Law.”