In The Same Territorial Space 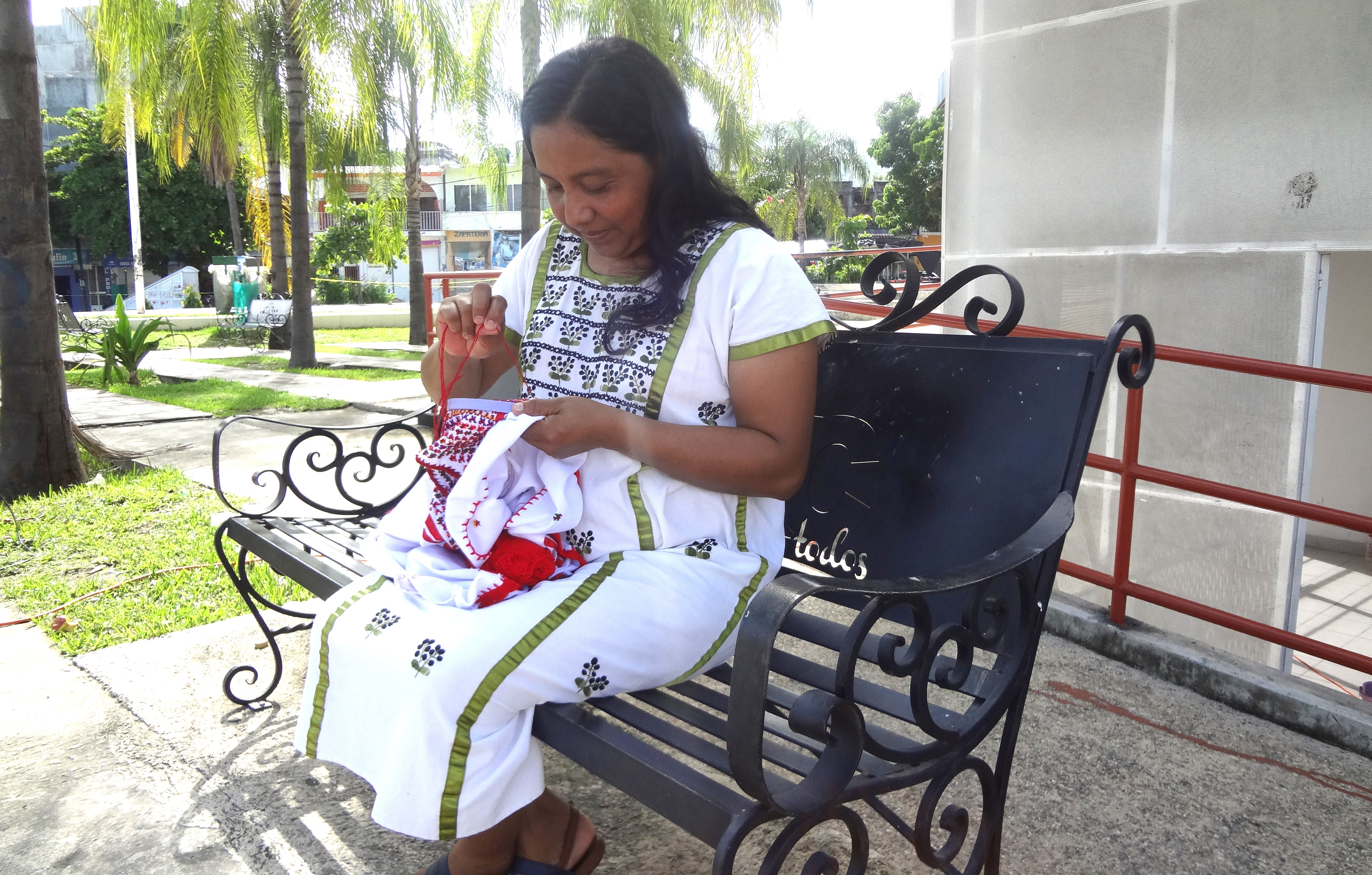 I walk on the sand and slow myself down.  I take in the sun at its highest point. One tree humming to another accompanies my steps, softly like the sounds of the tongue's brief skipping from word to word.  I recognize the phonemes because they are different, and in this difference a secret grows, a joy and a fear, so deep that occasionally it brushes the sounds far away from my daily walk.

I grew up in Santa Maria Zacatepec, in the municipality of Sierra Sur in Oaxaca.  During my elementary school years the only difference between my Tacuate classmates and me was language--a language I was familiar with and at the same time found strange.  We shared everything else:  hands that embroidered little animal figures onto soft cotton cloth, a hearth next to the clay pan where mom was making large tortillas, a father and some grandparents, together, planting and harvesting maize; and the profound effect of yearly celebrations and joyful people.

School years went by quickly and higher education was not available nearby, so I moved elsewhere, and with me, my intrigue with the mysterious way the people close to me spoke.  And so I studied linguistics.  Now four years later, I walk the streets of Zacatepec and it's impossible for me to see its people the way I used to.  The wind has changed, the sunset more red and contrasts more visible.  In a cafe/bar music in English is playing at peak volume and on the sidewalk in front two women dressed in their embroidered huipiles (traditional Indigenous women's blouses).  Between whispers, they chat in that shared and mysterious language called Tacuate--a language linguistically identified by the National Institute of Indigenous Languages (INALI) as a variant of Mixteco from the southeastern sierra of Oaxaca. 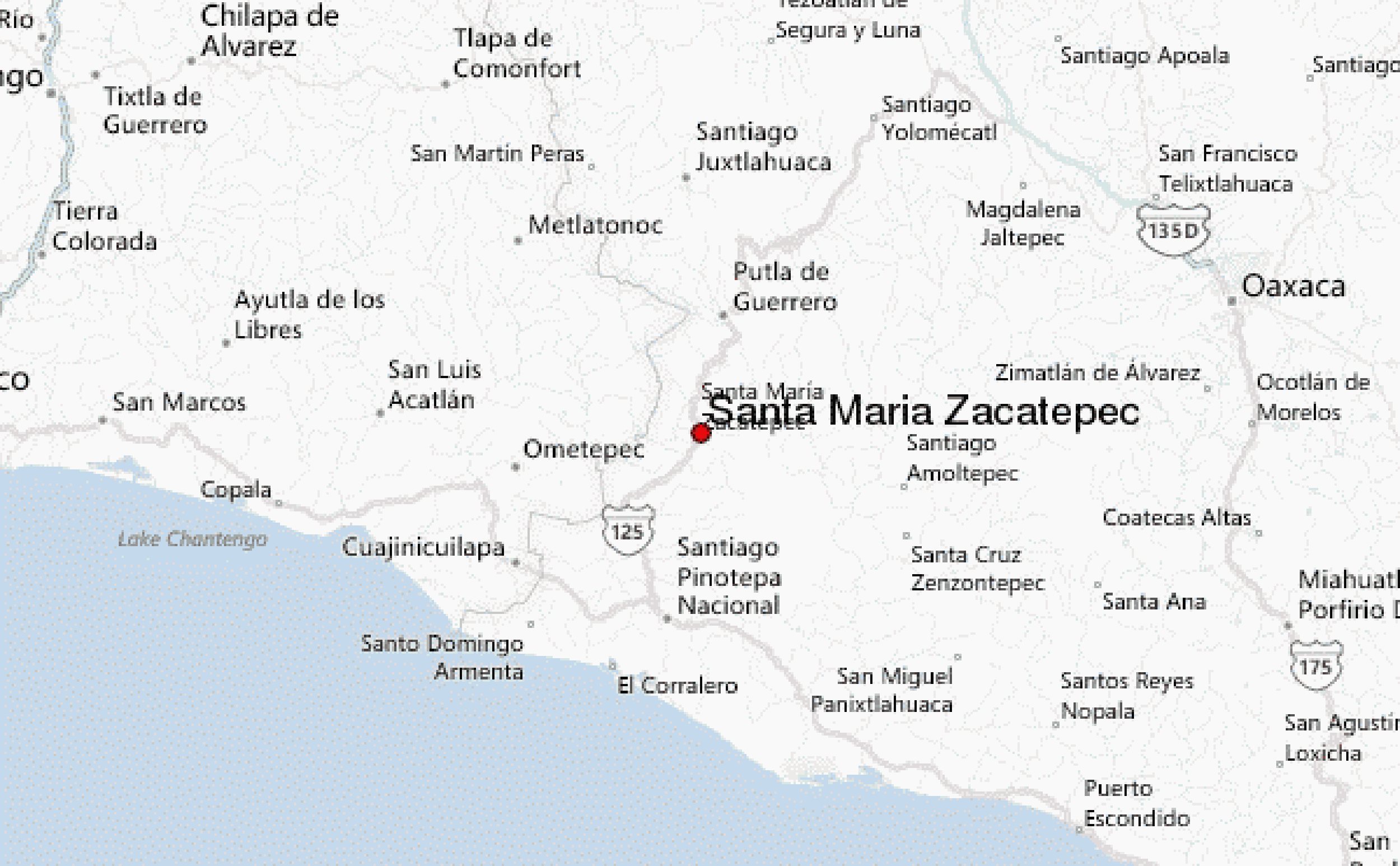 What's this all about?  Twenty-eight years ago, in its Magna Carta, Mexico recognized itself for the first time, as a country of heterogeneous composition:  multi-cultural and pluri-linguistic.  And following that, at the dawn of the 21st century, the national law of linguistic rights of Indigenous Peoples was published (LGDLPI) and institutions like the General Coordination for Intercultural Bilingualism (CGEIB), the National Commission for the Indigenous Peoples' Development (CDI) and the National Institute of Indigenous Languages (INALI) were created.  Together, all of these were to defend the right of minority language groups to revitalize themselves;  the right to utilize, develop and pass on to future generations histories, languages and oral traditions, etc.  Opportunities to learn native, Indigenous languages and the freedom to speak them in private and publicly without discrimination were made available.

Based on this, over the last few years, governmental, social and academic efforts were launched to encourage the use and integration of Indigenous languages in Mexican public life, e.g. through the formation of the National Registry of Interpreters and Translators of Indigenous Languages (PANITLI), promotions of public health programs, creation of digital and audio-visual instructional material, encouragement for writings and translation and publication of literary works in Indigenous languages--all of these contributing to solid advancement in changing the linguistic situation of our country. 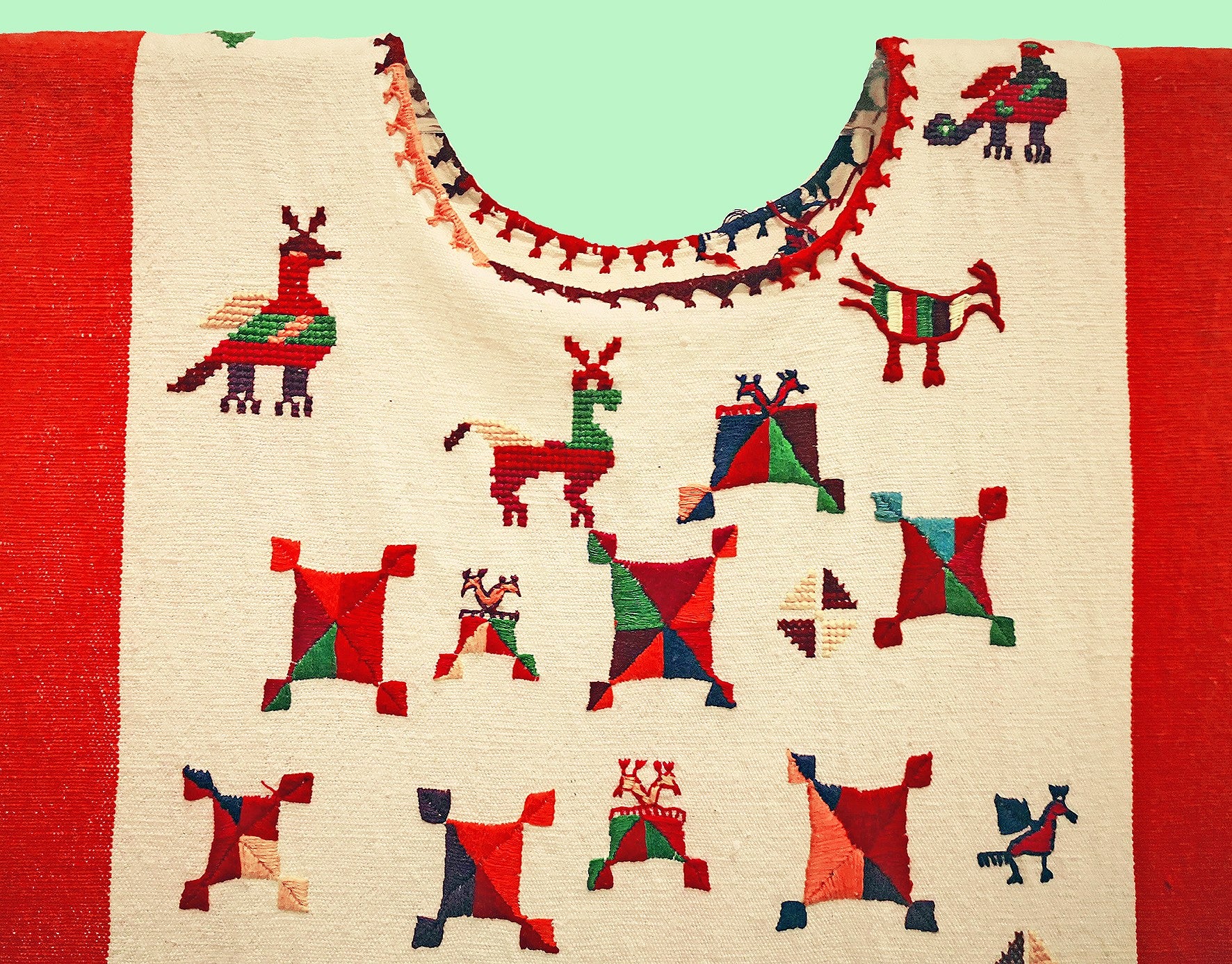 Nevertheless, it would seem that certain actions occur in a far-off universe as the use of Indigenous languages is not carried out.  Indeed, our local elders calmly explain that soon the last speakers of Indigenous languages will be gone.  With apparent fear, the Tacuates increasingly hide their language.  We use Spanish inside and outside our homes.  Yet, how skillfully they respond when I share my first words by asking them how they are in Tacuate (niyi ja’un kuenda!).  So why hide Tacuate from society?  What is missing in order to feel the freedom to speak an Indigenous language as if it were Spanish?

Undoubtedly, we haven't been able to overcome the wound of discrimination which defines us either as mestizo/ Spanish speakers or as Indigenous and speakers of a minority language.  The situation as is, in addition to a variety of  historic and social factors, locates us in an asymmetrical relationship of domination-subordination.  In Zacatepec, we call mestizos, "the people of reason".  It is their culture and the Spanish language, tools which position them at a superior level to the Tacuate people.  A people, who in spite of their notably bilingual skills, can not aspire to becoming "people of reason".  Unfortunately, reason is reserved for others.

Likewise, the geographic distribution of the Tacuate people and the mestizo of Santa Maria Zacatepec is clear:  Mestizos occupy the central area of the locality.  The Tacuate located around the edges where streets are sand, still unpaved, surround the center.  It is said that at one time the entire area belonged to the Tacuate with the strength of religion, political power and trade.  Daily life in general was of the Tacuate tradition.  Now everything has changed into a mixture of social practices.  Most notably different, beside dress, is that our language is different. 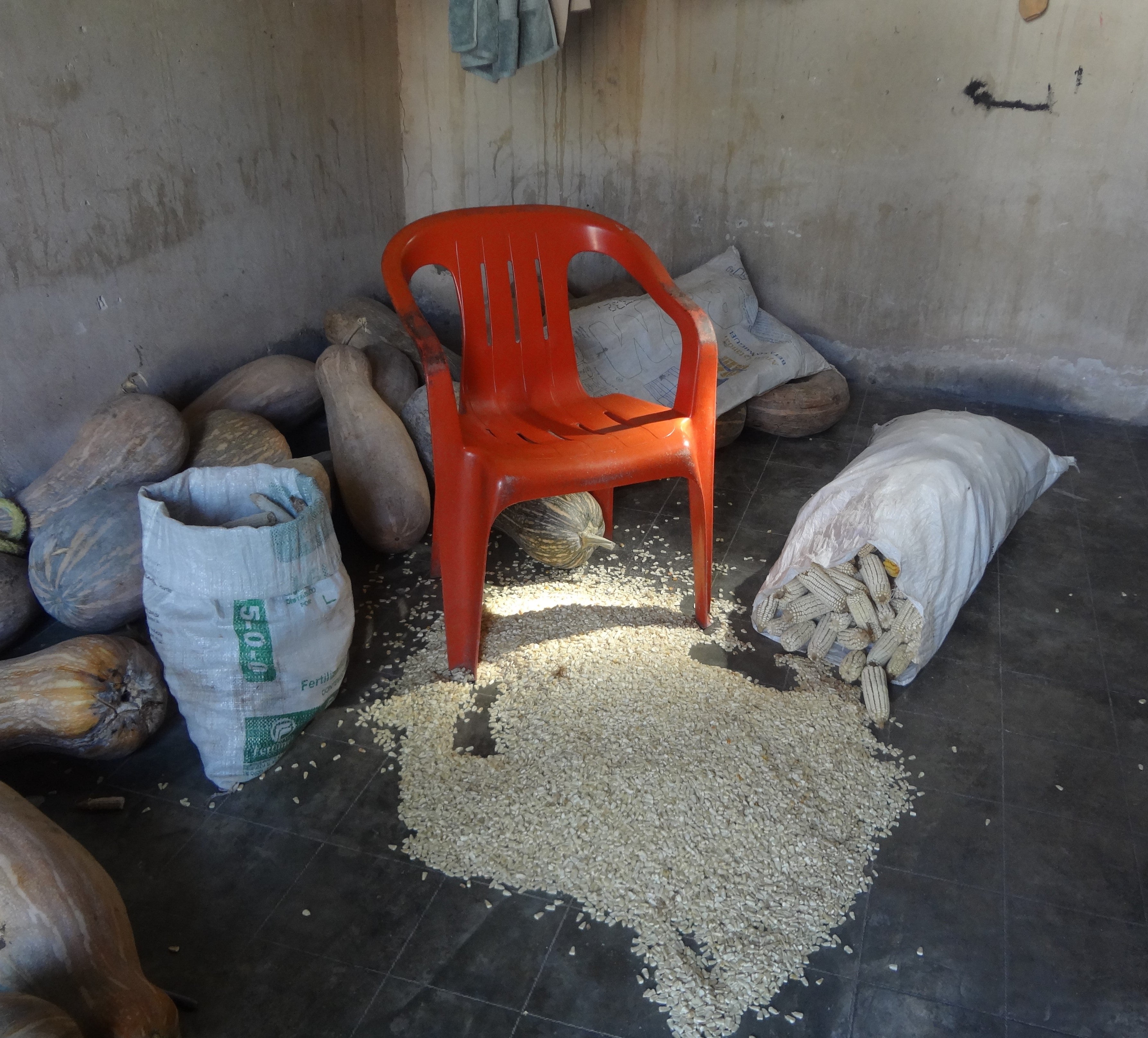 Even so, it's not about differences between the Tacuate and mestizos.  We share and live in the same territorial space and group interaction is inevitable.  And for this reason, there is a need to recognize cultural and linguistic diversity as widespread reality.  And we are all responsible for formulating this recognition.  The challenge of living together in a more healthy fashion demands collective work:  we must establish relationships based on respect, through being sensible, getting close to one another, becoming involved with one another, listening to each other allowing ourselves to see through the others' eyes; in order to comprehend social, economic and educational problems which, as the Indigenous population, we face each day.

As is mentioned in Laura Bensasson's Intercultural Education in Mexico, why and for whom?  in one way or another it is necessary to educate ourselves and to practice inter-cultural relationship, i.e.  to reflect on one's own culture and on that of others, opting for a mutual exchange of knowledge and value for the other.  In the end it is contributing to development of attitudes and practices of freedom and justice for all, promoting the strengthening of Indigenous language as much as Spanish, thereby, eliminating imposition of one language over the other.

We are encircled by and are the products of diversity.  And the manner in which we integrate inter-cultural aspects of our lives will make possible recognition of and reward for Indigenous self-confidence.  And it will make possible freedom and support for full exercise of our rights, among them, use of our languages and passing them on to the next generations which is essential for their continuation.  It this way we will have adopted an intercultural perspective and way of life--at the moment, actions favoring diversity and linguistic recognition that are responsible for a society committed to the reality surrounding it.  I am sure that such an attitude can happen, can be felt and make itself heard soon on the streets of Santa Maria Zacatepec.

--Esmeralda Peña is 22 years old and lives in Santa Maria Zacatepec, Oaxaca, Mexico.  She is a linguist at the Benemerita Autonomous Universidy of Puebla (BUAP).  Her interest lies in full dedication to the revitalization, documentation and morphosyntactic study of Indigenous languages of Mexico.  Currently, she works in development of teaching materials for children who are native speakers of Nahuatl in the northeastern sierra of Puebla state.  And in Santa Maria Zacatepec she does field work with bilingual speakers of Tacuate and Spanish who are learning and sharing their common languages.