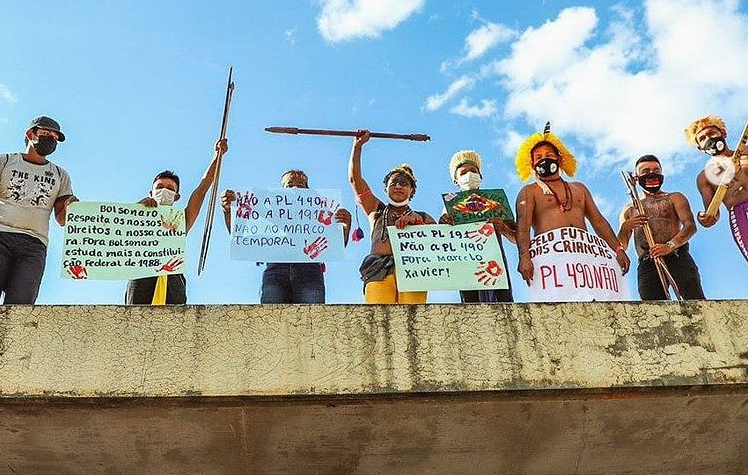 Since June 8, 2021, Indigenous Peoples and Indigenous organizations in Brazil have been in Brasilia, the capital, with the Levante pela Terra (Standing up for the Land) camp, protesting against Bill PL 490, which passed the technical juridical board of the legislative house to be approved on June 24, 2021. Bill PL 490 aims to make the demarcation of Indigenous lands in the country unfeasible and to set the year of the Constitution of 1988 as an arbitrary cut-off date for recognizing Indigenous land rights. If the Bill passes, Indigenous Peoples who were not on their land before 1988, due to various factors including forced removal and lack of legal recognition, would no longer have rights to their traditional territories.

In an anti-democratic response to these protests, the police in the capital, at the direction of the federal government, have used excessive force with Indigenous defenders in an effort to quell the protests. 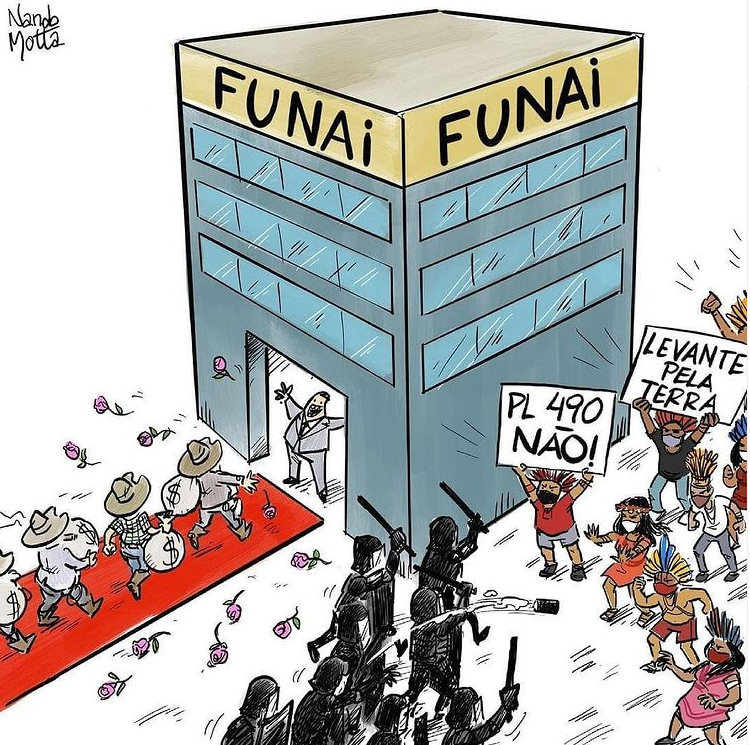 Bill PL 490 is dangerous and represents an end to several Indigenous rights protections also Brazil’s president's interest in withdrawing from the International Labour Organization Convention 169. It presents serious problems for Indigenous rights in the country. Surprisingly, the Bill is supported by the National Indian Foundation (FUNAI), a federal agency that is supposed to defend and guarantee the interests of the Indigenous Peoples in the country. FUNAI has promoted the bill as a “gold pot” for the country and Indigenous populations, saying that the construction of hydroelectric dams, vast monoculture farms, mining operations, and deforestation is to bring wealth to the country and Indigenous communities.

The Bill opens the gate for development on Indigenous lands, including deforestation for large scale cattle farming, mining leases, the regularization of illegal subdivisions in the territories in favor of land grabbers, and all kinds of large scale infrastructure such as hydroelectric plants, ports, roads, military bases etc. It would legalize operations that greatly impact Indigenous territories without their Free, Prior and Informed Consent (FPIC) nor benefit-sharing, and represents a new wave of colonization.

The Bill strengthens the thesis of the “time frame”, an interpretation defended by ruralists and sectors interested in the exploitation of Indigenous lands, which restricts the constitutional rights of Indigenous Peoples. According to the text of that law, Indigenous Peoples would only have the right to land if they were in legal possession of it by October 5, 1988, the date of promulgation of the Constitution.

The Bill also denies the right of Free, Prior and Informed Consent of Indigenous communities affected by large projects, a right guaranteed by ILO Convention 169, ratified by Brazil on July 25, 2002.

The Bill opens a loophole for the end of the policy of “no contact” with Indigenous Peoples living in voluntary isolation. These Peoples are extremely vulnerable to unforeseen contacts and conflicts because they do not have immunological resistance to contagious diseases common among non-Indigenous populations, such as influenza and tuberculosis.

Bill PL 490 also establishes a long series of other barriers to ongoing demarcations. The main one being the possibility of filing disputes at all stages of the complex and lengthy demarcation procedure. Reports and questions could be presented by representatives of municipalities, farmers' associations, rural producers, and invaders in general - a clear replacement of the collective right for an individual right.

Cultural Survival expresses our solidarity with and support of APIB, APOINME, and other Indigenous partner organizations, as well as communities that cannot go to Brasilia physically to protest. We urge the Commission's parliamentarians to archive and not approve the Bill 490/2007.