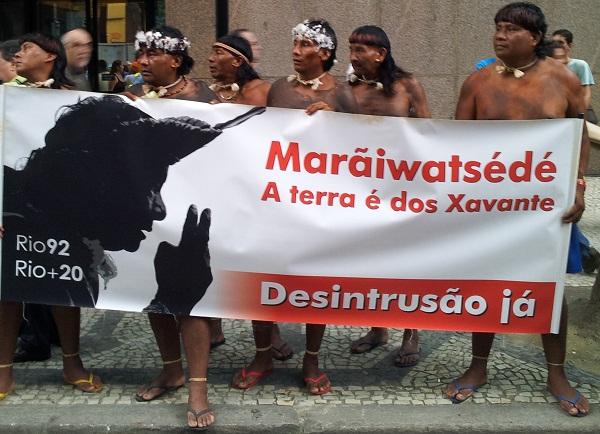 On June 23, 2012, after digging trenches in the highway and burning bridges to prevent access to nearby towns, armed invaders stepped up their occupation of the Xavante territory of Marãiwatsede in western Brazil. Their action aims to prevent Xavante from attaining the final step for legal recognition of their rights to Marãiwatsede, an area in the region of the Suia Missu river in Mato Grosso, Brazil.  Xavante from Marãiwatsede traveled hundreds of miles to bring attention to their struggle at the United Nations Conference on Sustainable Development, the Rio +20 Earth Summit.

On May 18, 2012, Xavante scored a major victory in their more than 20 year fight to recoup this land.  The Regional branch of the Federal court recognized their demands for the removal of illegal invaders. Ranchers subsequently paid Xavante from other areas to sign documents authorizing the removal of local Xavante inhabitants and stepped up death threats against leaders, including the leader and chief Damião. Tensions have escalated and the threat of violence is now extremely high.

Xavante were forcibly removed from the Marãiwatsede area in 1966 when the Brazilian Air Force airlifted the region’s inhabitants over 100 miles to the south, to the Salesian mission at São Marcos.  There over a third of this group perished in a devastating measles epidemic. Meanwhile, ownership of their lands transferred to one of Italy’s largest firms, AGIP (Azienda Generale Italiana Petroli, General Italian Oil Company) which became one of Latin America’s largest landowners. Known as the Suia Missu ranch, the area was used for cattle ranching and is now in the heart of the world’s  most lucrative and largest soy producing region.

The Brazilian government officially recognized Marãiwatsede as a Xavante territory in 1998.  When Xavante attempted to resettle in 2002, armed gunmen prohibited them.  Xavante camped for over a year in improvised shelters on the roadside next to their lands. Three babies died.  In 2004, they finally entered their lands,since then living in less than 10% of their territory.  The remained continues to be illegally occupied and is extremely deforested.

Despite the 1998 presidential act that recognized Marãiwatsede as Xavante territory, ranchers have not ceded their claims. For nearly 20 years powerful local ranchers and politicians have prevented the final step to federal recognition of Xavante rights by tying up the case in courts, promoting illegal settlement, and promoting devastation of the area’s natural resources for cattle ranching and soy plantations.

Xavante from Marãiwatsede regularly suffer death threats and other obstacles to their well-being.  Before the international audience assembled at the Rio +20 Earth Summit, Xavante sought to widen their net of supporters and demanded that the state, which recognizes their rights to this area, fulfill its obligation to remove illegal occupants from their land so that they may live in peace.