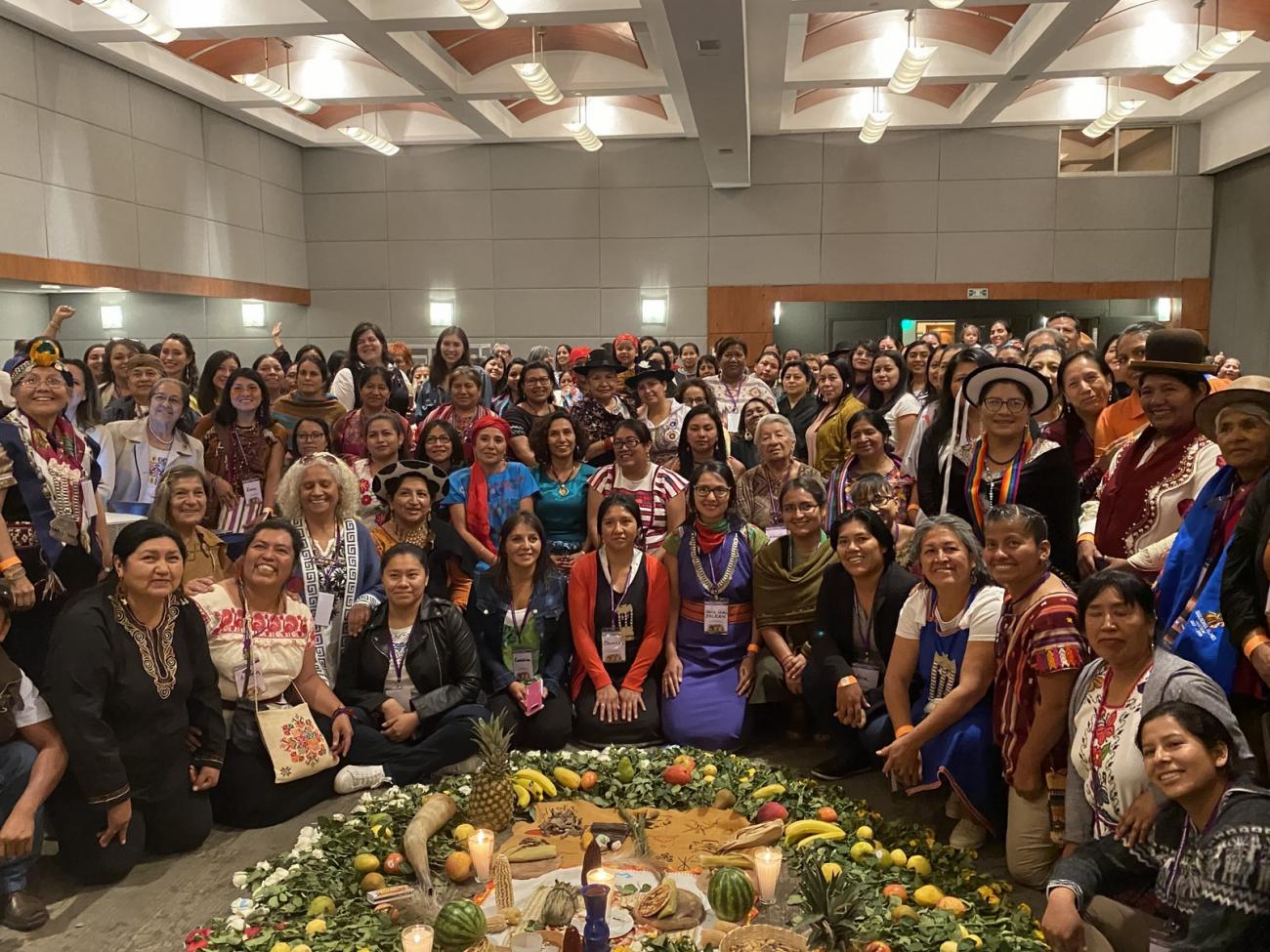 Discriminated on the basis of our gender and ethnicity, we, Indigenous women, are more vulnerable to living a life of poverty and to be deprived of education and health. Moreover, we suffer different forms of abuse such as displacement of our territories, racism and discrimination, slave labor and sexual exploitation. Today, we talk about violence in its plural form, encompassing the multiple forms in which it manifests in our lives and demanding that this multidimensional approach is included at the moment of designing any public program or policy that affects our lives.

In order to address the challenges that we face when exercising our rights, Indigenous women organize at the international level in spaces such as the Continental Network of Indigenous Women of the Americas (ECMIA), a network with a membership of more than thirty women and mixed organizations from twenty-three countries, aiming at promoting capacity-building among new leaders and taking our demands and proposals throughout the United Nations system. In this scenario, our historical allies are partners in the articulation and strengthening of the Indigenous women movement and its strive for a life free of violences.

Nearly three hundred grassroots leaders, lawyers, parliamentarians, communicators and Indigenous rights defenders from different generations (and more than 20 countries) gathered last February in Mexico City for the 8th Continental Meeting of Indigenous Women of the Americas. In this event, we asked the States to have disaggregated data by gender, ethnicity and age regarding the implementation of public policies, access to justice and investment relevant to the eradication of violences against Indigenous women.

Likewise, we urge special agencies to carry out studies on the health of Indigenous women who have suffered violences from mining, oil and hydroelectric companies, agribusiness and other extractive megaprojects. On the other hand, we made a call on the media to establish a protocol for addressing violences and to decrease content that uses racist stereotypes for Indigenous women. Our political declaration contains the long-term agenda of Indigenous women and should be considered by the people and public authorities addressing those issues, with our effective participation.

We are pleased to inform that CHIRAPAQ, Center for Indigenous Cultures of Peru, the association where I am proudly the vice-president, was elected ECMIA’s Continental Coordinator. CHIRAPAQ assumes this responsibility for a second time by the unanimous agreement of the Indigenous organizations in recognition to its effort and commitment as the promoter of leaderships, demands and proposals of Indigenous women.

Indigenous women are building our political action around the strive against violences, contesting patriarchal power structures within our Indigenous organizations, building solution alternatives coming from us as actors of our own lives.

--Tarcila Rivera Zea is vice-president of CHIRAPAQ, Center for Indigenous Cultures of Peru. She was a member of the UN Permanent Forum on Indigenous Issues and is a Ford Foundation Visionaries Award recipient. She promotes capacity-building and political projection among Indigenous young women leaders as one of the founders of the Continental Network of Indigenous Women of the Americas (ECMIA) and the International Indigenous Women’s Forum (FIMI- IIWF).