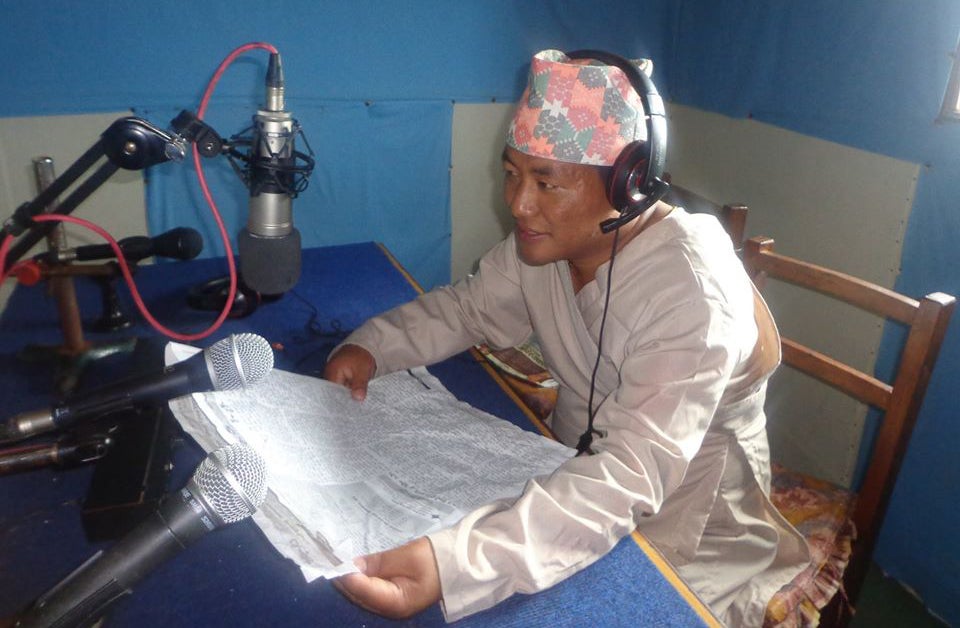 
Radio Menchhyayem has been recognized as one of the first radio stations run and managed by Limbu Indigenous communities. Since its inception, it has been advocating for the right to access information, education, and delivery of justice in the Limbu language.

Founded in 2008 by a group of Limbu Indigenous rights activists in the Tehrathum district, the ancestral heartland of Limbu Indigenous communities, the station dedicated a year-long special program focusing on the rights of Indigenous Peoples enshrined in the Constitution and international laws.


“We started Indigenous community radio to create a common platform for Limbu Indigenous nationalities where they can express their common concerns,” says Manoj. “During the COVID-19 crisis, we dedicated the station not only to inform [people] with health messages, but also about [their] rights based on the UN Declaration on the Rights of Indigenous Peoples and ILO Convention 169.”


According to Limbu, as people were under lockdown in the pandemic, there were massive violations of Indigenous Peoples’ rights as many construction projects were approved and expedited. Radio Menchhyayem was pivotal during the Covid crisis in informing Limbu Indigenous communities of their constitutional and international rights and also in encouraging them to claim their rights.


Community radio can be the best means for informing communities about the services provided by the local government, as well as laws, policies, budgets, and adopted plans. “The locals have been expressing whether or not they have received the facilities, the budget allocated by the government, and implementation of the plans as per the plans,” says Manu Yakthungba, program chief at Radio Menchhyayem. 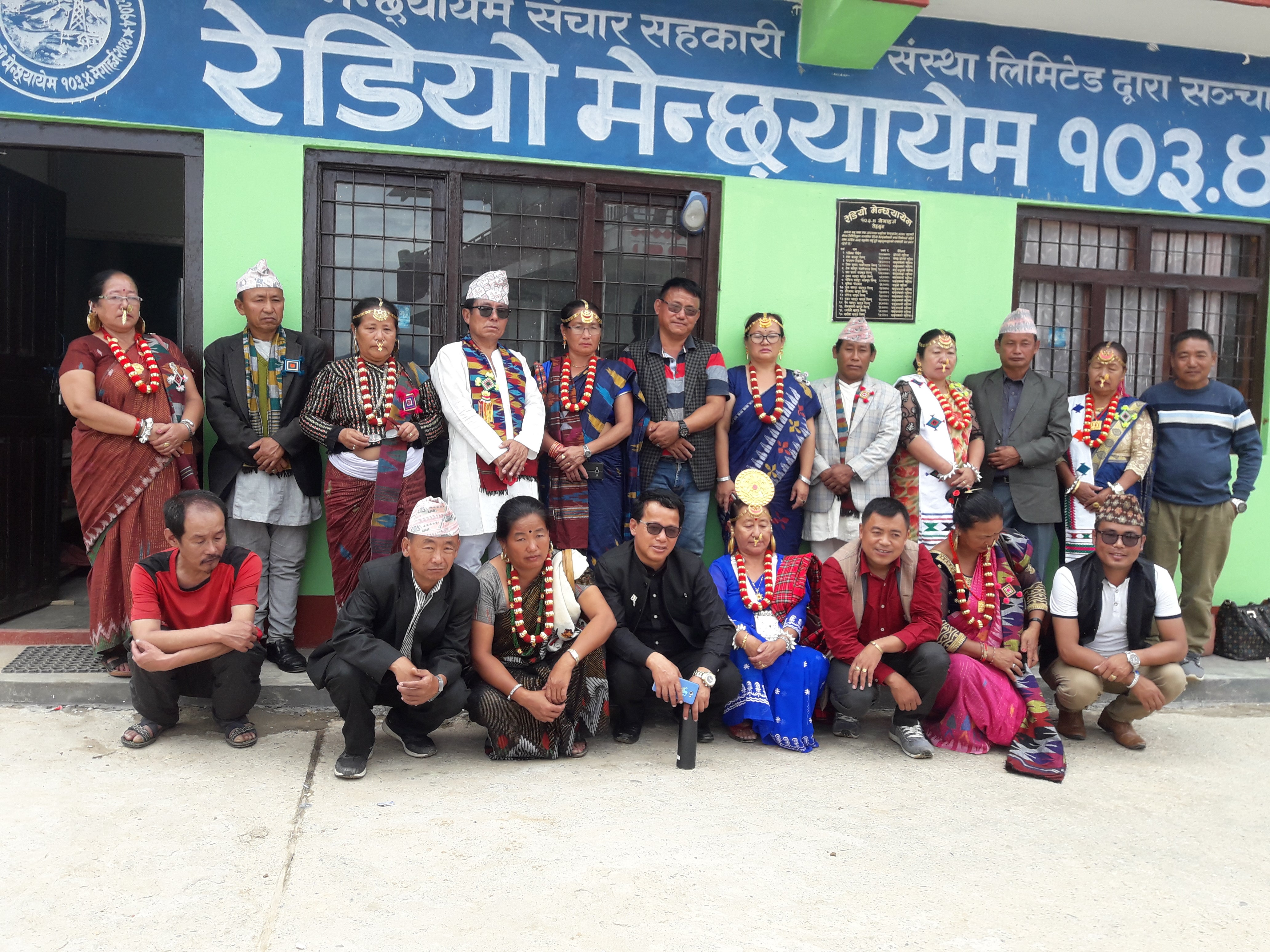 More importantly, community radio presents the information in a local context, which can also mean enjoying their right to freedom of expression and right to information in their mother tongue. Radio Menchhyayem conducted programs on rights of Indigenous Peoples based on ILO Convention 169 and the UN Declaration. The major focus of the programming was raising awareness on Free, Prior and Informed Consent in government projects.

Radio Menchhyayem produced a series of special programs contextualizing the rights of Indigenous Peoples that focused mainly on their right to participate in decision making in matters that would affect their rights through their elected representatives, chosen in accordance with their own procedures.

Programs additionally covered the rights of Indigenous Peoples over land, territories, and natural resources, mainly their right to consultation, participation, benefit-sharing, and compensation while undertaking any development project in their land and territories. Even more importantly, Radio Menchhyayem produced and advocated education in a culturally appropriate manner in the community’s native language, respecting Indigenous Peoples’ cultural and linguistic rights.


Nepal has ratified ILO 169 and also voted yes to the Declaration, but implementation of these instruments has not yet taken place in the proper sense. Radio is a means to bring such issues into debate and raise awareness about the rights of the local Indigenous communities while making local government accountable for the rights of Indigenous Peoples in various development works that are undertaken in their leadership or with their authorization.


The local government is designated to promote local language and ensure the rights of local peoples, but it has remained silent on this issue. Community radio intends to raise the voices and concerns of Indigenous Peoples and make local government accountable for ensuring their rights to self-defined development and language and Free, Prior and Informed Consent; and equally promoting Indigenous Peoples’ cultural, linguistic, and social rights ensured in the UN Declaration as well as the Constitution and rules and laws devised by the local government.


Community radio raised the local communities’ voices and concerns about the hydropower projects undertaken in their land and territories such as Upper Kharangw Hydropower, Tamor Hydropower, and Midhill Lok Marg, to name a few, without fulfilling Free, Prior and Informed Consent and largely displacing many local Indigenous communities. The government introduced conservation plans such as the Tinjure Milke Jaljale Forest conservation plan, Pathivara Development Committee, and road construction, among others. Such projects have massively encroached the ancestral land of Limbu Indigenous communities.

Radio Menchhyayem extensively covered the historic meeting of Limbu Indigenous nationalities, which united more than 70 different organizations on December 3-4, 2021, and aimed at ensuring their land rights. An Indigenous Community Media Fund grant from Cultural Survival enabled Radio Menchhyayem to raise Indigenous voices and facilitated a number of displaced families in demanding compensation for their losses, empowering them to claim their rights. The radio programs provided community members a platform for having direct dialogue with the stakeholders and service providers, including local government stakeholders, and ultimately helped to realize their rights.


Community radio highlights local problems, and listeners enhance and spread their knowledge through participation in the programs.  It is a platform for debating and resolving local issues, and also for preserving and protecting languages, cultures, and art.


Limbu has its own mother tongue and its own distinct script called Srijanga. Article 7 (2) of the Constitution states that a province may, by provincial law, determine one or more languages of the national language spoken by a majority of people within the provinces as its official language(s) in addition to Nepali, while other matters relating to language shall be as decided by the government on the recommendation of the Language Commission. However, this provision has yet to be implemented into practice.


“The Language Commission’s recommendation has opened the door for the provinces to use Indigenous Peoples’ languages for official uses,” says Manoj. “Although there are challenges for practical implementation of the recommendation, it is a historic beginning.”


This report was produced based on a conversation with Bhagishwar Limbu Manoj, station manager, and Manu Yakthungba, program chief, at Radio Menchhyayem.