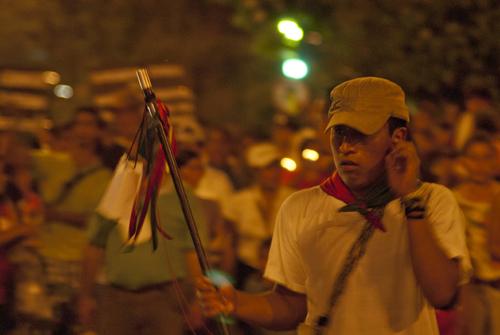 On October 19, 2020, thousands of protestors poured in Colombia’s capital city, Bogotá, to peacefully protest and march. The group, ranging anywhere from 7,000 to 10,000 people, included Indigenous and Afro-Colombian community members, farmers, teachers, and activists, many of whom travelled from hundreds of miles away to gather in Bogotá. The demonstrators referred to themselves as the Minga Indígena. The Indigenous word ‘minga’ loosely describes collective community work for the common good. Thus, the Minga Indígena movement encapsulates efforts towards solidarity-building and collective mobilization for change.

With confirmed coronavirus cases rising to a total of one million nationally, many are protesting the government’s lack of effective response during the pandemic, demanding more financial and employment support. The heart of the protests, however, have largely formed in response to the continued violence across the nation, including frequent killings of activists and community leaders.

The struggle over internal conflicts is ongoing, continuing and even worsening after the 2016 Peace Accord was signed between the government and Colombia’s largest armed rebel group, the Revolutionary Armed Forces of Colombia (FARC). The accord was meant to end the decades-long civil war with FARC, a conflict that resulted in over 200,000 deaths and displaced approximately 6 million people. The peace deal focused on granting Indigenous communities more autonomy, provided investments in education and infrastructure, and allocated resources to the communities hardest hit by chronic violence. Despite the accord’s promises, it did not amount to the peace that many people had hoped for. The government’s support never materialized after the accord signing, and instead other criminal groups and violent instigators established their presence.

The protests are directed at the Colombian government and President Iván Duque. Many of the demonstrators believe that President Duque is responsible for failing to quell the violence and protect Indigenous Peoples. Since taking the presidency in 2018, President Duque has addressed ongoing violence by sending military reinforcement to communities already heated in conflict. He blames the escalating violence on drug traffickers, ex-FARC coalitions, and guerrilla groups. Protesters affirm that President Duque’s efforts have done little to nothing to offer support outside of his militarization strategy.

A smaller group initially gathered in Cali to meet with the President and discuss ways forward. However, the protest organizers reported that their demands were ignored. In response, the group began mobilizing en masse, travelling in caravans, on motorcycles, and in ‘chivas’ (colorfully decorated vans), to take their demands to the capital city.

“We want this President, who governs with his back to the country, to listen to social organizations, to build a national agenda from the streets, with farmers, [I]ndigenous people and students,” said Jhonatan Centeno, one of the protest organizers.

By October 19, thousands of protestors had gathered in Bogotá and demanded another meeting with President Duque. Despite the mass demonstrations, the President offered no direct response, instead attending a private event in Cartagena. The Minga Indígena stayed in Bogotá through the 21st, camping out in sports arenas and continuing to demonstrate.

"The pandemic has been devastating for the community. Extreme poverty has skyrocketed since lockdown measures began. Farmers in rural areas had no way to bring their goods to market, and urban areas were devastated by unemployment,” said Andre Mais. Mais, a seed banker who runs his own business in Cauca, works mostly with local farmers and Indigenous and Afro-Colombian communities. When he heard of the protests, Mais volunteered to drive one of the chivas for a youth group traveling to the capital. “We changed our operation entirely and focused instead on emergency nutritional needs of vulnerable communities. Families were starving while the government did nothing.”

Between the ongoing violence and pandemic, Indigenous communities are some of the most vulnerable. Many of the Indigenous territories have an abundance of natural resources such as timber and minerals which serve as a source of historical conflict and displacement as a result of mining operations. Some drug routes also intersect Indigenous communities, setting the stage for additional conflict.

Efforts to speak out against territory disputes or impede criminal activities further endanger the lives of activists and leaders. Indepaz, an organization that monitors peace and development, reports that in 2020 alone, 233 community organizers have been killed amid the violence. A total of 640 people have been killed since the start of Duque’s presidency in 2018 and over 1,000 people have been killed since the Peace Accord signing in 2016, most of whom were Afro-Colombian or Indigenous. Much of the violence is concentrated in the southwestern and western regions of Colombia where the crop used to make cocaine, the coca plant, is most commonly farmed.

Whether the violence be due to criminal activity or government militarization, the Minga Indígena and its supporters are refusing further government inaction. By demanding that President Duque address his complicity in the violence and honor the promises in the 2016 Peace Accord, they are hoping to achieve the peace dreamed of four years ago.