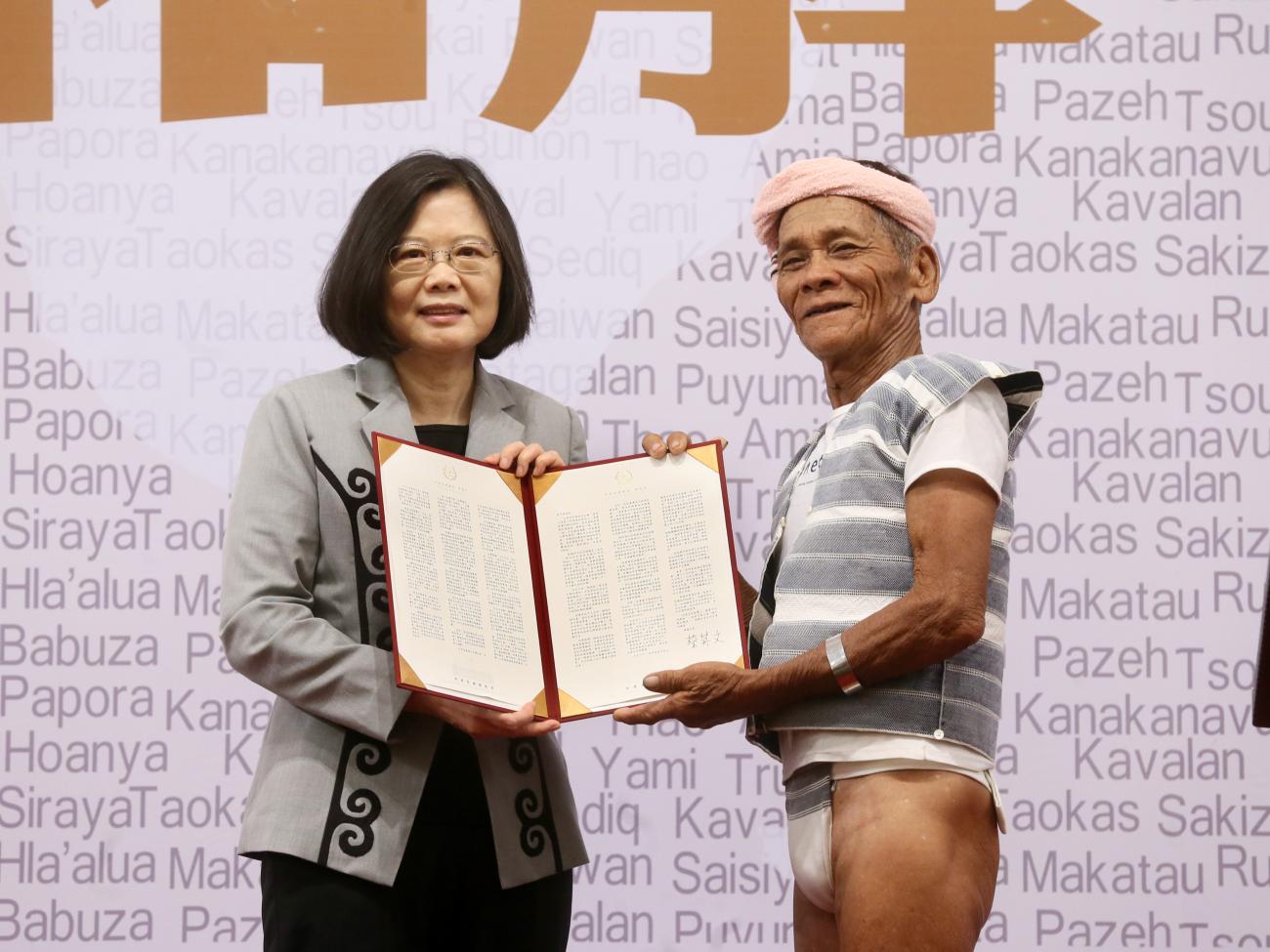 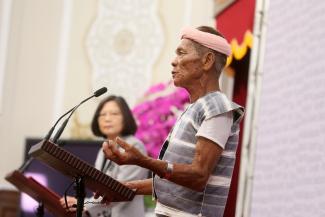 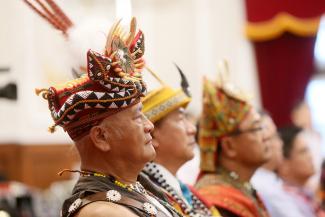 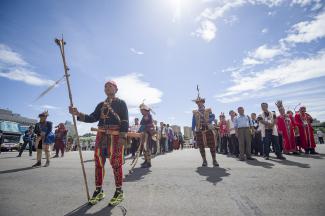 Tsai Ing-wen (蔡英文) won the Presidential election of Taiwan on January 16, 2016 by a large margin, earning 56.1% of the votes versus 31.0% for the runner up, Eric Chu (朱立倫). The election results signaled a turning point in Taiwan’s democracy, with the Democratic Progressive Party winning a majority of the seats in the Legislative Yuan (the lawmaking body) as well.  Tsai accepted the “will of the Taiwanese people” as a sign that citizens wanted a significant change from former failed policies and unfulfilled promises.

When the President announced she would make a formal apology to Indigenous Peoples on behalf of the government, some were surprised and hopeful, but many were apprehensive and doubtful that it would lead to much change. Doubters referenced the Indigenous Peoples Basic Law, established on February 5, 2005 during the Chen Shui-bian administration, claiming that it did not adequately protect their rights, especially when their traditional practices conflicted with Taiwan’s laws. Pessimism among Indigenous people also came from promises made by former President Chen, which did not materialize.

Leading up to the formal apology, Indigenous leaders and protestors expressed their hopes to see improvements in a variety of issues, such as land rights, hunting rights, and tribal autonomy. There was concern that various Indigenous groups would fight over limited resources offered for reconciliation, especially if the government includes the Pingpu (lowland) tribes, which are not officially-recognized. There was concern that the new policies would be made without direct consultation with Indigenous Peoples and communities. Most took a wait-and-see approach, and wanted to see policies that would be meaningful and enforceable. They wanted to commission to be able to have the legal power to investigate past abuses. A professor at National Dong Hwa University reminded indigenous people that the seeking of truth and justice would be complicated, as this was “a crime with no perpetrators, and no beneficiaries - but only victims.”

The formal apology to Taiwan’s Indigenous Peoples took place on the hot, sunny morning of August 1, 2016, which the President’s Cabinet officially declared as the national Indigenous People’s Day. Indigenous leaders from every recognized Taiwanese tribe dressed in traditional outfits and regalia entered the front entrance, greeted by the President. After the doors closed, protesters, consisting of activists who had walked for hundreds of kilometers from their home villages, and had been occupying the street in front of the presidential palace since the previous night, rushed towards the entrance, wanting to be heard. They were held at bay by a police with riot shields, and no one was hurt.

The president’s speech surprised many for being both substantial and specific.  The acknowledgment of  responsibility was clear and direct.

1)Apologized for “four centuries of pain and mistreatment” the Indigenous people had endured.

2)Admitted that during the past 400 years, every regime “brutally violated the rights of Indigenous people through armed invasion and land seizure,” including the Dutch, Koxinga Kingdom, Qing Empire, Colonial Japan and the Kuomingtang (KMT) governments.

3)Acknowledged the “erasing” of thousands of years of Taiwanese history by dominating governments.

4)Expressed  remorse for the erosion of languages and cultural identities, because of governments’ assimilation policies, especially those of the Pingpu (lowland) tribes.

5)Apologized for the negative consequences suffered by the Yami tribe after the government decided to store nuclear waste on Orchid Island.

6)Admitted that the Indigenous Peoples Basic Law of Taiwan had not been given sufficient weight by government agencies.

It was a politically risky move for Tsai to make a formal apology to Indigenous Peoples, and it went against the Asian cultural convention of avoiding apologies and confrontation in order to “save face.” In offering a formal apology, Taiwan’s President did what no other Asian government leader had ever done, and Taiwan’s was only the 4th government in the world to offer an apology to its Indigenous Peoples.

Tsai Ing-wen expressed her motivations for an apology to all Taiwanese people in her speech. She stated, “...there are some around us who see no need to apologize. But that is the most important reason why I am representing the government to issue this apology today. To see what was unfair in the past as a matter of course, or to treat the pain of other ethnic peoples as an unavoidable part of human development, this is the first mindset that we, standing here today, resolve to change and overturn.”

Further championing her cause for change, Tsai added, “Unless we deny that we are a country of justice, we must face up to this history. We must tell the truth. And then, most importantly, the government must genuinely reflect on this past.”

Just as many Indigenous leaders and protestors acknowledged that the apology was meaningless without meaningful action and Indigenous representation, the President shared her agreement in segments of her speech that:

1) Discussed the setting up of the Indigenous Historical Justice and Transitional Justice Commission under the Presidential Office.

2) Promised that the commission would “place the greatest importance on equality between the country and the Indigenous Peoples.”

3) Declared that the commission serve as a “mechanism for collective decision-making by Indigenous Peoples, and will ensure that the voices of tribal members find true expression.”

4) Committed to examining relevant laws to begin the formal process of giving the status and rights to the Pingpu tribes.

6) Offered appropriate compensation to the Yami tribe on Orchid Island.

Uncertain if the President would bring up the politically-sensitive issue of nuclear waste storage on Orchid Island, Tsai surprised many people when she shared the stage with Capen Nganaen, a representative of the Yami Tribe. After the moving apology, Capen stated, “Taiwan has had many presidents during its history, but never before has one been willing to offer an apology to the Indigenous Peoples,” seeming to express genuine appreciation for the opportunity.

President Tsai demonstrated that her apology was more than just talk, by inviting Indigenous leaders to “stand witness” and “keep pressure on the government and right its course where necessary, so that it will realize its commitments and right historical wrongs.” Immediately after the speech on Monday, Indigenous leaders, academics, and government workers began the complicated task of putting together policy to fulfill on the President’s promises. Just a few hours after the apology, Tsai addressed the Council of Indigenous Peoples and Indigenous leaders during a working session on Indigenous policy.

Meanwhile, activists camped out in front of the Office of the President, demanding that President Tsai Ing-wen recognize their presence and their call for “nation-to-nation” dialogue. On Wednesday, August 3, Tsai surprised the demonstrators by making an impromptu visit on the street, speaking directly with the leaders of the demonstration. President Tsai demonstrated her sympathy to many people who witnessed her conversation with well-known Indigenous singer and activist Panai Kusui. Tsai listened quietly to Panai’s complaints, and when she asked the President where she places the nation’s Indigenous Peoples, Tsai placed Panai’s hand to her heart and responded, “You are here.” The President added that her feelings for Indigenous people were from the “deepest, softest part of her heart.” The meeting concluded with Tsai inviting Panai Kusui to join the transitional justice team that was being organized.

Taiwan’s official apology to Indigenous people gained widespread attention throughout international media, being covered by news sources throughout the world. As a news story, it gained considerable interest, not only for its stand for Indigenous rights, human rights, and transitional justice. From it, international readers, especially Indigenous people around the world, can learn from the apology and resulting developments. Indigenous communities can teach their leaders what is possible when a government accepts responsibility to establish a stronger foundation built on truth and justice, and they can take heart in knowing that it is possible for Indigenous people and governments to work together towards reconciliation and mutual respect.

--Tony Coolidge is a Taiwanese-American journalist and entrepreneur with Atayal roots.

All photos courtesy of Office of the President, ROC