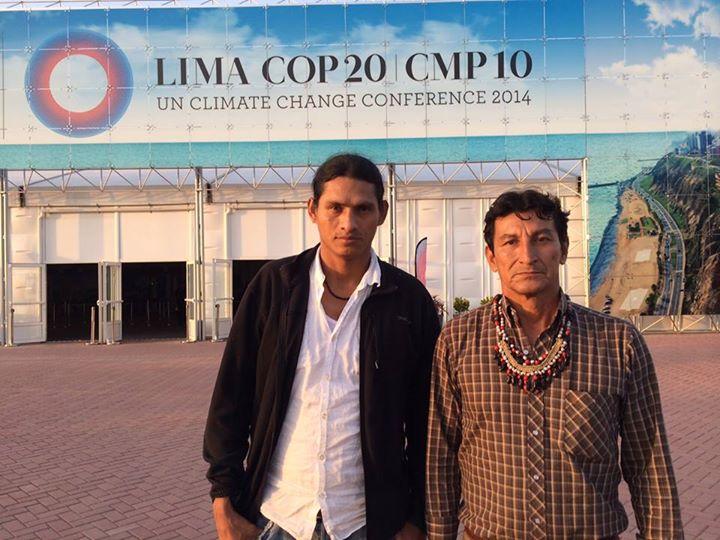 Photo: Alfonso Lopez Tejada and Jose Fachin at the COP 20 in Lima. Photo by ACODECOSPAT Kukumas

In Lima, Peru, the United Nations Climate Change Conference known as COP 20 is currently taking place, and finally, Indigenous leaders have been given a seat at the table.

Representatives from the Amazon region of Peru spoke at the conference on December 3rd exposing deep contamination from petroleum extraction in four river basins that are tributaries to the Amazon river. The communities who live alongside the Pastaza, Corrientes, Tigre and Marañón rivers have experienced the effects of this contamination, which includes over nine billion barrels of toxic waste dumped directly into the river during decades of unmonitored oil extraction and processing in the heart of the Amazon rainforest.

The president of a federation of traditional community leaders of the Kukama Kukamiria people “ACODECOSPAT”, Apu Alfonso Lopez Tejada, presented a proposal to the Peruvian government on behalf of his community and those of the three other rivers, including federations FECONACO, FEDIQUEP, and FECONAT. The proposal reiterates demands by communities for titles to their lands, a diagnostic of contamination in the forests, fauna, and the levels of toxic contamination present in the bloodstreams of community members themselves, an immediate remediation of these harmful effects, and the provision of clean drinking water to all of the residents in the affected areas.  They also demand compensation for the harm done to them, and government investment in food sovereignty programs.  “After more than 40 years of extracting billions of dollars in petroleum from our lands, the government only ever responds by saying they don’t have funds to support this.  This is what we’re dealing with: the territory of the Kukama Kukamiria in the Pacaya Samiria Nature Reserve, a Natural World Heritage site, is being destroyed by the extractive industry that is part of this destructive economic system,” declared Tejada.  Indeed, rather than address these issues, the government of Peru is seeking to renew the license for petroleum extraction in Lot 1AB.

On November 12th, the government presented a new regulation, known as the Environmental Ruling on Hydrocarbons.

The legislation fails to require the establishment of the Free, Prior, Informed Consent of Indigenous Peoples regarding the extraction of petroleum on their lands, violating the International Labor Organization’s convention 169 which Peru signed on to in 1996. “This bid for renewal cannot happen without a prior consultation process… doing so would lead to a major social conflict” warned congresswoman Veronika Mendonza last week, as reported by Servindi.

The regulation also failed to require an Environmental Impact Assessment for exploration activities in the ocean, coastal regions, or mountain ranges, mentioning only its necessity in the case of exploration in rainforested parts of the country.  Shockingly, the regulations also makes a special exception for petroleum companies, exempting them the requirement to conduct an Environmental Impact Assessment for exploration.

Eleodoro Mayorga, president of the Ministry of Energy and Mines, who proposed the law, made it clear where the priorities lie for the establishment of this legislation.  She commented to La Republica, “The impact of the new regulations will be immediate and will contribute to the development of Peru, because these industries represent almost two-thirds of the country’s exports and their investment projects are essential for reactivating the economy and continuing to grow as a country.”

Leaked emails from Mayorga to the Ministry of the Environment president Pulgar Vidal, made public in August 2014 by the hacker group Anonymous Peru showed that Petroleum company Karoon Energy International intervened in the drafting of the bill by providing “technical knowledge” for its wording. Not surprisingly, Karoon currently holds a license for petroleum exploration in the ocean along the northern coast of Peru, and are now exempt from conducting an Environmental Impact Assessment under the new law.

Peru’s government has shown a vacilating track record on implementing Indigenous People’s right to Free, Prior, Informed Consent and their rights to access their ancestral lands.  It was one of the first countries to enact legislation guaranteeing Indigenous Peoples right to “prior consultation” in 2011, but prior consultation notably falls short of requiring the active consent of a community, and has often been construed as a way to green light projects without actually responding to a community’s concerns. Foreseeing this dilemma, Indigenous communities in the four river basins where Lot 1AB is located stalemated the renewal of Pluspetrol’s license when they announced they would not engage in a consultation to renew for another 25 years of oil extraction on their traditional lands, until their demands for remediation for the past 42 years were met.   In an interview with The Hindu, Tejada explained,  “The state doesn’t have the will to regulate the extractive industries, and the water systems have been polluted by dumping of toxic wastes from oil extraction for 30 years. From a Western point of view, oil means progress, development and modernity. But oil has made us poorer and it has meant death and destruction.”