Part of Nature, Co-existing and Sharing: Insights from Boabeng Fiema 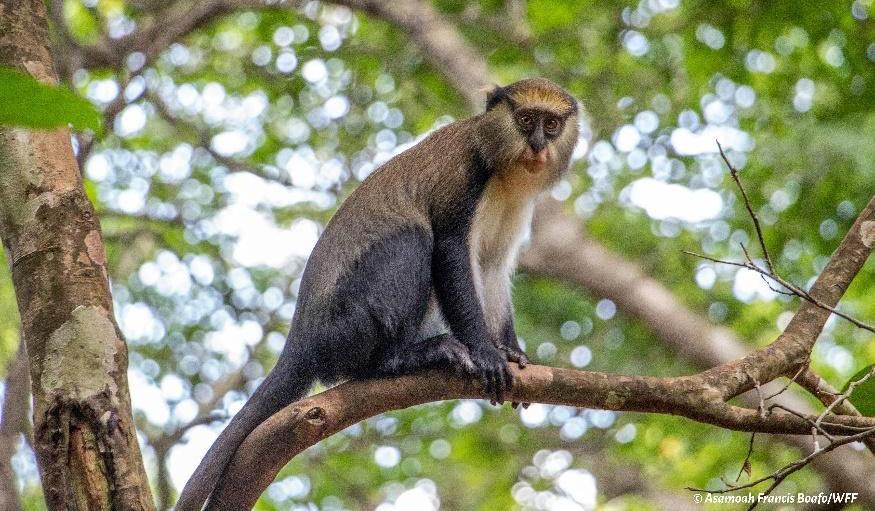 Paying attention to traditional belief systems such as taboos and myths provides an essential tool in securing people’s engagement with environmental issues in Ghana. The rate at which species are disappearing in Ghana and at which environmental harm is occurring becomes more alarming with every passing day. How can this be? Is there hope for restoration? Will posterity forgive the current generation? These are a few of the questions that keep hovering in my mind, particularly because I was brought up in a rural setting where life was complete in an awesome, rich, and natural setting. I have experienced firsthand wonderful river bodies and plant and animal species that are now lost completely. Unfathomably, breathtaking and beautiful ecosystems which support a variety of plant and animal species have been destroyed by so-called advanced agriculture, industrialization, and mining, among other processes. Some of the native animals which have existed for years are now rare, and others have been forced to acclimatize to these new unfavorable conditions.

The consequences of resource degradation include: people being obliged to walk long distances to fetch water; not having opportunities to fetch firewood or to collect wild food such as mushrooms or snails; have not only affected daily survival but also impacted our local environmental and economic prosperity. As long ago as 1948, the unprecedented exploitation of environmental resources in Ghana, informed the need to adopt a forest policy. The idea of forest reserve demarcation was a good one, but has it actually addressed human-induced activities? The answer is simply “no.” A particular problem is that this legislation restricted or regulated the local community access to their usual hunting, fishing, and harvesting of timber and non-timber products. As a result, the lack of cooperation between local inhabitants and government authorities has generated serious conflicts which have even led to the loss of lives of many forest rangers. The rising human population has further exacerbated the pressure mounting on forest reserves, diminishing the size of in-tact protected areas and their quality. Consequently, the failure to safeguard our environmental resources has not only affected our well being, but also discredited our products from receiving the standard premium on the global market. Ultimately, degrading the ecological integrity of Ghana’s forests poses a serious risk to the survival of wildlife and human health. John Oates in his book Myth and Reality in the Rain Forest: How Conservation Strategies are Failing in West Africa (1999) reveals the fact that most of Ghana’s forest reserves are just standing tall but with a drastically reduced population of wild animals.

Highly esteemed century-old belief systems and traditional knowledge that once protected environmental resources through restrictions, control of access and prohibition, have lost their value and respect as a result of increasing beliefs in alternative religions and modernization. Should we continue to destroy the environment and in turn jeopardize our survival? I propose the need for community awareness programs in local communities coupled with massive media campaigns. This has the potential to improve human interconnectedness with nature which can inform a new way of thinking towards achieving a sustainable environment.

The International Union for the Conservation of Nature (IUCN) identifies that designating Protected Areas is not enough without integrating traditional cultures and traditional knowledge into their management plans.  It is vital to understand that lifeways in many societies are influenced by their beliefs, cultural practices, and relationships to the natural world. Cultural traditions, such as not going fishing or hunting on a particular day, or totemic beliefs, often complement conservation objectives. This indicates that culture cannot be downplayed in biodiversity conservation. UNESCO in 2001 recommended that culture should be regarded as a distinguishing collection of materials, emotional and spiritual beliefs and values, which are essential tools for long-term sustainability of our environment and development. Accordingly, culture can go a long way to produce a meaningful ecosystem management collaboration when fully explored. However, cultures of several communities in Ghana have also been degraded by colonization and a taste for western culture, inflicting serious wounds on the sustainability of distinctive traditional beliefs, norms, and values.

Despite alarming failed concepts and conservation approaches, there are still bright spots of hope. This is the case with the inhabitants of the towns of Boabeng and Fiema in the rural Brong Ahafo region of Ghana, where most of the local population still embrace their culture of safeguarding the forest landscape for the continuous survival of wildlife. This is the only community that has successfully protected two groups of monkeys; Lowe’s monkey (Cercopithecus campbelli lowei) and the White thighed colobus (Colobus vellerosus). Importantly the White thighed colobus is listed as critically endangered on the IUCN 2020 Red list. This is the only place in Ghana where a large, stable population can be observed and appreciated.

What has made the Brong Ahafo region so special? It is an interesting case study of how cultural heritage and conservation go hand in hand. The long history of the towns shows a strong religious connection to these monkeys. Traditionally it was believed that the monkeys are the offspring of a male god called Abodwo and a female priestess, Daworoh, who once lived in these two communities. As a result, the monkeys have always been protected and regarded as “children of the gods,” according to Attuquayefio and Gyampoh. Cultural heritage has therefore been maintained ever since the demise of these two priests. However, in the 1970s, the introduction of the Christian religion by western missionaries led to the establishment of two churches in these communities. The beliefs of many were soon changed and led many to disregard the myth and belief that these monkeys were their ancestors. This resulted in the killing of the monkeys for food consumption. However, traditional leaders stood their ground and condemned the act of killing these animals. The then Game and Wildlife Department (now Ghana Wildlife Division) also intervened in the management of this sanctuary by passing by-laws forbidding locals from killing animals within a 4.8km radius (Fargey, 1992). It should be emphasized that culture is unconsciously acquired from upbringing and community, which means that upcoming generations develop the tendency to show care for nature if they imbibe the right environmental culture from infancy. This has been observed over the years at the Boabeng Fiema Monkey Sanctuary, as young children are deeply rooted in their culture of habitat preservation for the survival of these monkeys. The children grow into adulthood with the acquired knowledge of coexisting with these monkeys, and that we all deserve to share this planet together.

Another unique thing about the culture of the Boabeng Fiema people is the funeral and rite of passage which is strongly given to these monkeys when they die. The monkeys are given a befitting burial in a cemetery located within the sanctuary. Details such as date of death, sex, species etc. are provided on a signboard. This tradition and belief system indicates the deep respect accorded to these monkeys and the attributed sense of belonging.

Enshrined in the culture of these people is a collaborative communal labour system that has achieved several developmental projects in the community. Importantly, the community has been able to establish a tree plantation around the monkey sanctuary serving as a fire belt, thus mitigating periodic fire outbreaks during the dry season. A popular quote goes “when the last tree dies, the last man dies.” The realization and the importance placed on this saying is seen in how local communities embrace their long-standing traditions and cultures of protecting environmental resources. Though the population of people living in these two communities has significantly increased, leading to a reduction in the total green space, a good habitat size has been demarcated in the form of a reserve.

The sanctuary currently serves as a means of attracting eco-tourists, including many local and international visitors. Revenues generated are usually used to implement local projects such as school infrastructures, pipe-borne water and other basic amenities. This has proven that aside from the ecosystem service functions of the forest, it is also a great source of income generation, boosting the local economy. Local inhabitants make good money from sales of bananas to visitors to the sanctuary; local cuisine is also enjoyed by visitors; and local guest houses cater for visiting researchers. The co-existence of the inhabitants and the monkeys has been made possible because people perceive the animals as part of their worldview. They are more or less like “siblings” who are entitled to a common pool of resources. This is a call for action to revisit our traditions which have been neglected, and the view that we are superior to animals. We cannot continue to live thinking that we’ve got another planet, rather, we should hold in trust these resources for perpetuity. If we begin to see non-renewable resources as part of the community to which we belong, then we will care for it. Leopold in 1949 made this statement that “We abuse land because we regard it as a commodity belonging to us. When we see land as a community to which we belong, we may begin to use it with love and respect.”

While attempting to identify strategies to encourage environmentally responsible behaviour, I once spoke with an elder lady during the course of my community engagement. I asked her if she knew why wild animals were declining at an escalating rate. She replied: “the gods must be angry because they no longer receive maximum sacrifices from the inhabitants”. Two important things came to mind: culture and education. Research shows that those who care about environmental resources are either those who had early childhood nature experiences or have learnt about environmental actions through classroom engagement, environmental clubs, and role models etc.

Many people continue to ask whether we should conserve our resources and go hungry or utilize them for consumption and economic purposes. This question suggests that environmental education has not really reached into the minds of the people. Of course, we need resources for food, production and economic development, among others. However, we need to better understand the fact that environmental resources are a pool of common resources many of which are infinite in nature. By successfully building on their traditional knowledge, myths and Indigenous teachings about the environment, the people of Boabeng and Fiema have shown that they can embrace and benefit from behaviours that help to protect local habitats and respect the species found there.

--Samuel Afutor (Ewe) grew up in Adaklu Waya, a rural community in Ghana where he had joyous nature experiences during his childhood. He envisions an elevated society where individuals can make credible decisions for both ecological and socio-cultural gains. He has served as a former president of A Rocha Ghana- KNUST Chapter (an environmental organization) where he led the group to carry out several conservation awareness campaigns and outreach programmes in schools and communities. He is determined to acquire knowledge and help innovate sustainable ideas for biodiversity conservation. Reach Afutor at samuelafutor@trentu.ca, afutorsamuel@gmail.com.