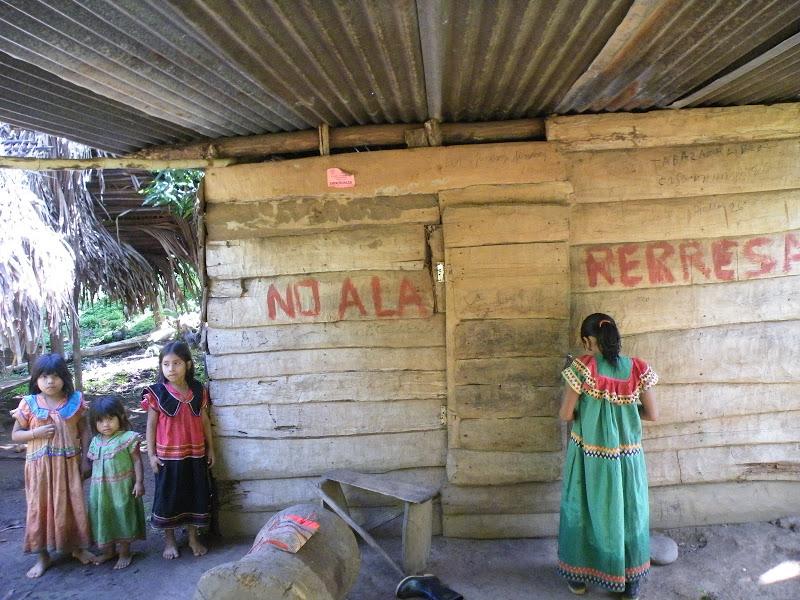 Ngöbe activists of the M22 resistance movement protesting the Barro Blanco dam were physically removed from their protest camp earlier this month, in July 2015, by Panamanian police, reported  Richard Arghiris for Intercontinental Cry.   In the Vigui community nearby, police actually flooded a protest camp and have been preventing activists from assembling in protest of the dam. Police are also employing “loud sirens and harsh spotlights trained on [protest] camps” in Tolé in the Chiriquí province to harass protesters throughout the night.

In June, Arghiris and Jennifer Kennedy reported on a similar event in which President Varela sent a riot squad to Tolé to quell protesters who had been “periodically closing the Interamerican highway for no more than two hours at a time”. The indigenous protesters, members of the two indigenous resistance movements  M22 and M10, had also been trying to slow construction of the dam by blocking the entrance to the construction site and preventing workers from entering.

In sending in the state troopers and police, President Varelas, who, as Arghiris points out, has promoted himself as a “nice guy”, is reneging on the public promise he made in February to halt all construction of the dam until a negotiated agreement was reached with surrounding communities. In effect, President Varela is demonstrating his support for GENISA, the Honduras-owned company in charge of building the dam, and the foreign banks that have invested in the Barro Blanco hydroelectric project. He is ignoring the needs of Panama’s Indigenous Peoples and the consequences the project will have on their livelihoods.

From the beginning, the construction of the dam has been controversial. Many groups, including the United Nations, several NGOs and Panama’s environmental agency, have pointed out that GENISA’s environmental impact assessment of the dam was extremely inaccurate and skewed so as to attract more funding. The major international funders, including the German Investment Corporation and the Dutch Development Bank, similarly failed to properly assess the social and environmental impacts of the project. Most recently in June, one of the directors of GENISA was arrested for embezzlement of $60 million from the state of Honduras.

The Barro Blanco dam is now 90-95% complete. If finished, the dam will displace 460 people and affect another 3,500 people, who will lose access to farming and hunting land, fishing grounds, and clean drinking water. Flooding from the dam will destroy the Ngöbe peoples’ churches, schools, and the burial site of their sacred petroglyphs. The dam is being built without the free, prior, and informed consent of the people affected by it and no Ngöbe person was consulted for the government’s environmental impact assessment.