Not Made in a Factory: Made by Thailand's Hill Tribes 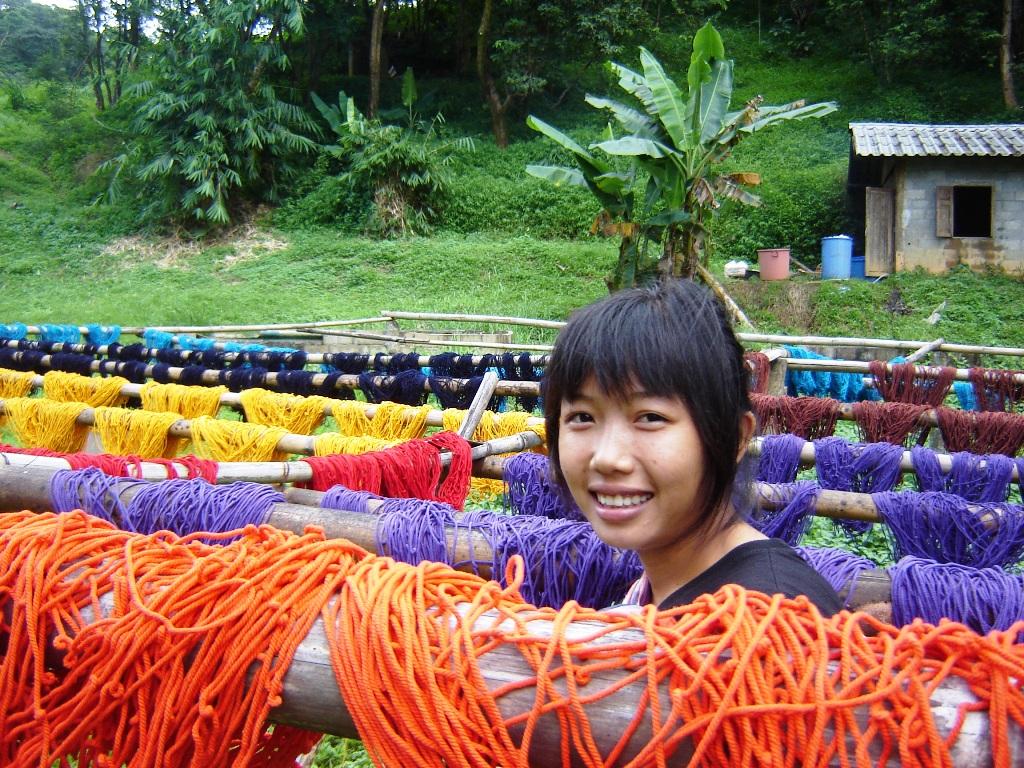 A few kilometres from the Burmese border in northern Thailand, Anchalee Katipatoom is attempting to close a sale. “Not made in a factory. Made by the hill tribe.” At her roadside stall, backed by an avocado grove and with views across to the forested curves of the Daen Lao mountain range, Anchalee is selling garments hand-woven by the Kachin people, an ethnic group Indigenous mainly to northern Burma.

Although not Kachin herself, Anchalee lives close to Ban Mai Samaki, the only Kachin village in Thailand, established in 1982 for Kachin refugees fleeing the violence –erupting once again –in their home state.

Anchalee makes the journey from her village daily to capture the passing tourist trade; primarily middle-class Thai’s escaping the heat and pollution of Chiang Mai, Thailand’s second largest city, for a brief gulp of mountain air. The trade on this minor road is hardly brisk.

With her impressive English, I ask Anchalee whether she could find more profitable work as a tour guide. She says she has worked as a guide in the past, but the Kachin have few opportunities to earn an income. She feels drawn to help. As proof, perhaps, of her good intentions, she rummages in her bag and retrieves her official tour guide ID.

The story of Anchalee and the Kachin is atypical. Measured against the fortunes of other hill tribes in Thailand they are the unlucky ones.  Because for more than sixty years Thailand has enacted village-based development programmes to pull upland communities - hill tribes - out of poverty.

Established in 1952 by Thailand’s current king, Bhumibol Adulyadej, and known as "Royal Projects," these programmes were initiated to wean the tribes off poppy cultivation and on to legal cash crops. Today, their scale is vast. There are more than 4,000 in operation, growing everything from Japanese apricots to African violet flowers. Unlike the Kachin, tribes working with Royal Projects have a guaranteed route to market. Every supermarket in the country sells Royal Project produce.  Tesco in Thailand recently announced a doubling in value of produce sourced from the Royal Projects to 60 million baht (S1.91m) for 2013.

Amidst the hot springs and waterfalls of Mae Ta Krai national park, Salee’s job is to teach local farmers how to pack produce and tend their land. Salee works at the Hua Tin Tok Royal Project, and her enthusiasm is evident. She tells the story of one farmer who recently began receiving assistance from the project. On his own, he struggled to produce good harvests and sell his vegetables. During the last growing season – six to seven months – he earned ฿100,000 baht ($3,150) selling bok choi and kale. In a country where the daily minimum wage is 300 baht ($9.45), Salee marvels at how Hua Tin Tok has changed this man’s life.

Despite stories like this, and for all their visibility, “no serious critical evaluation of the impact (of Royal Projects) has ever been done,” says Andrew Walker, associate lecturer at Australia National University and a Southeast Asia expert. Thailand has some of the strictest lèse majesté laws in the world and this forestalls any criticism. “The dominant philosophy coming from the royal family is that you don’t ask detailed questions,” Walker says. Despite this, he believes there is “little doubt” that the projects have had a significantly positive impact on standards of living. If so, does this lack of accountability matter? It might, if it enables a culture of corruption. Walker says there is “no reason” to believe that the Royal Projects “have been immune from misappropriation of resources and outright diversion of funds” which have dogged large-scale government assistance programmes in other parts of the world.

There is another tribe which, like the Kachin, are marginal in number and receive little Royal Project assistance. The Mlabri were the last hunter-gatherer tribe in Thailand, animists who as recently as thirty years ago were still living a nomadic hunter-gatherer existence. Unlike the Kachin, however, their traditional weaving skills have found an international market.  “The Mlabri would make bags from jungle vines. It was very intricate work and (the pattern) would resemble a fish net – or hammock,” explains Ben Dejonghe, a Belgian national who alongside three others runs a project selling hammocks made by the Mlabri.

Threatened with severe habitat loss as a result of deforestation, and with the assistance of a missionary in the early-1980s, the Mlabri built permanent houses and started growing their own crops. In the mid-90s they began weaving hammocks to earn an income.  Dejonghe stresses that the Mlabri have no production demands imposed on them. “They don’t pursue materialism so work according to their needs. The Mlabri dictate when they want to work.” He says that weaving is preferable to the demanding agricultural work which would otherwise be their only option. It is also provides younger members of the tribe with a viable alternative to seeking work in the city. The hammocks are sold at four retail outlets in Thailand as well as to buyers in the US, Japan and the Maldives. It is a striking apposition. Former hunter-gatherers operating within the global economy, an interconnectedness which has helped them secure their very existence.

This interconnectedness can be found in other surprising places.  Fang is a nondescript town 200km north of Chiang Mai. Here Adam helps run the Phumanee Home Hotel. Adam is his western name. He doesn’t have a written name, because his tribe, the Lahu, have no written language. He tells me his tribal name sounds like Ja-Joy. Adam is one of ten Lahu working at this Lahu-run, Trip Advisor-listed (and well rated) hotel. Numbering around 100,000 in Thailand, the Lahu originated in China around the Tibetan plateau. Adam’s father moved the family from the hills to a nearby village when Adam was thirteen. His mother stayed in the village, but Adam came to work at the hotel. With its celebrations of Lahu life on the walls, and staff wearing traditional dress, the hotel’s success, fuelled by its rankings on a global social network, helps the Lahu retain their identity and sense of community.

Anchalee’s experience is in sharp contrast to the Lahu hotel, Mlabri weavers and Royal Project-assisted communities. She is not optimistic about the future. “Only the Kachin elders weave now. They say the border here (with Burma) will re-open in three years. But they have said this many times before.” Her eyes dart expectantly to an approaching van. It speeds on by.

--Nathan Williams is a freelance journalist and communications consultant specialising in climate finance and sustainability, based in Bristol, UK.