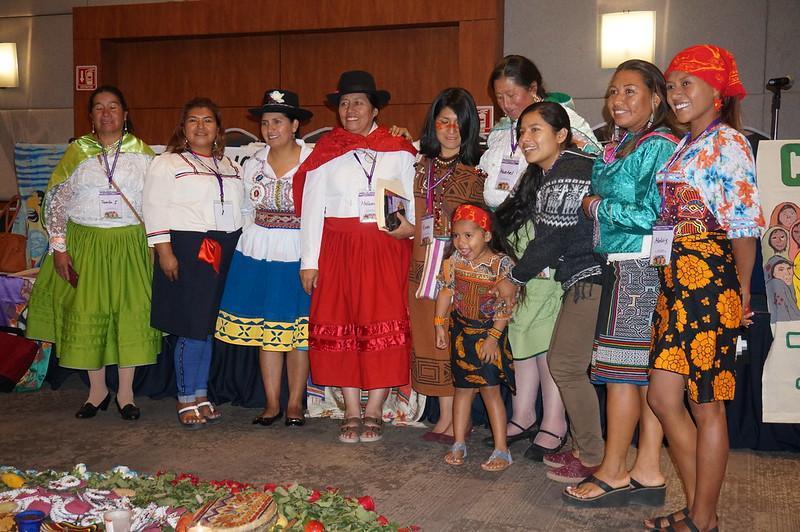 In mid-May, 2020, the Continental Network of Indigenous Women of the Americas (ECMIA), composed of over 30 women or mixed-gender organizations from more than 23 countries, released their report titled “Indigenous Women of the Americas in the Face of the COVID-19 Pandemic,” which discusses the effects of the COVID-19 pandemic on the over 25 million Indigenous women living in the Americas. Focusing on Indigenous women is of the utmost importance, as they face what ECMIA calls a “triple discrimination” based on ethnicity, gender, and class, and especially now, as the most vulnerable often face the harshest impacts of global crises such as the current one. The report is composed of information on the current situation of Indigenous women in the Americas, as well as ECMIA’s recommendations to governments and international organizations.

Under the current circumstances, Indigenous communities have established basic protection methods for their communities. It states: “Within the framework of our right to self-determination, the Indigenous communities of the Americas decided to close our frontiers and prohibit the entry of outsiders, as a response to the lack of action on the part of governments.” In Chile and Mexico, for example, communities have prevented tourists and outsiders fleeing the capital cities from entering; in the Amazon Basin communities have called on their governments and international organizations for better protection. In North America, many Indigenous people have also limited access to their communities. However, and particularly in the United States, “these Peoples face a challenge when neighboring communities refuse to abide by government rules on social isolation, qualifying the tribal communities as racists because they implement strict orders.”

In addition to these measures, the report mentions that “we, Indigenous women, report that our communities are complying with social distancing measures, remaining at home and going out only when essential activities such as production, finding food or health emergencies require us to do so.” However, because some Indigenous Peoples in urban areas get their income from sales in public places or self-employment, access to social protection measures is uncertain, meaning that many must continue working if they want the money to survive. Many Indigenous communities also lack access to water—the report states that per a ComexPerú report, only 67.3 percent of Indigenous people in Peru have access to running water, and that water access is also a large issue in Venezuela, Argentina, and Paraguay.

“Economic independence is still a distant dream for Indigenous women,” states the report, and the financial situation of Indigenous women is even more precarious given the current shutdown of many domestic economies. Although countries such as Canada and Argentina have made some efforts to ameliorate this, most have not, and the support that is given is not enough. “In view of this reality,” ECMI writes, “Indigenous organizations in the three Americas request focalized economic measures for Indigenous Peoples and, specifically, measures focused on the economic empowerment of Indigenous women.”

Indigenous women are also facing a severe risk of domestic violence, with growing numbers of reports over the previous months. For example, “during the first weekend under the obligatory social isolation established by the Chilean government, the Ministry of Women and Gender Equality reported a 70% increase in calls made by women to the helpline providing advice with regard to family violence,” and “according to the Colombian National Police Force, between March 20, when preventive social isolation started, and April 7, the helpline for women who are victims of violence dealt with a daily average of 108 calls; by comparison, the daily average number of calls before the confinement was 54.” Governments already did not offer many mechanisms to counter domestic and gender-based violence, but some has shelters for women fleeing domestic violence, Now, though, the pandemic has made the movement of people more dangerous than ever, and many shelters have lost funding amidst all of the ongoing chaos. To make matters worse, the increased armed government presence that has come out of responses to the pandemic heightens the risk of violence against Indigenous women.

Despite the immense challenges Indigenous communities are facing, Indigenous Peoples have been stepping up en masse to respond to the situation at hand. In the United States, the Navajo People’s Health Department has created an interactive map of cases, as well as helplines for medical and psychological advice. Community members have also started initiatives to support those around them, including delivering food and water to the community’s most vulnerable. At the same time, in Peru, the National Organization of Indigenous Andean and Amazonian Women of Peru has initiated a three-pronged approach to tackle the spread and effects of COVID-19 on Indigenous communities. It involves regional and nationwide advocacy, the collection of information on the situation and community responses, and communications to make visible the reality of Indigenous women. However, national governments need to take on a role, too. They need to have, to quote the report, “ethnicity-disaggregated data at their disposal in order to determine possible risk factors, to assess, monitor and provide suitable strategies for these groups. In the region, the majority of the reports on infected or deceased Indigenous persons come from the organizations and communities themselves.”

Indigenous women are playing a critical role in these community responses. The report states: “We, Indigenous women in different countries in the region, put into practice our traditional medicine and knowledge of ethnobotany to strengthen the immune system and prevent respiratory ailments.” In Argentina, for example, this included the promotion of a balanced diet; in Canada, the Native Women’s Association has a support line run by wise women.

Indigenous craftspeople have also found ways to benefit their communities. In Paraguay, Yalve Sanga women are selling masks in a large drugstore chain, and in Mexico and Peru, Indigenous women are making face masks out of natural materials.

Despite the strong responses of Indigenous communities throughout the Americas, ECMIA makes it clear that much more needs to be done in order to help the most vulnerable, and particularly Indigenous women. First, approaches to health issues in Indigenous communities need to take into account that “sicknesses are caused not only by physical and biological factors but also social and spiritual ones.” In addition, the report also calls on governments:

“To guarantee the full representative, informed and effective participation of Indigenous women and our organizations in the design, implementation, monitoring and evaluation of measures to address the public health emergency and to mitigate its effects in the post-crisis context.

To guarantee transport from the communities to health centers so that Indigenous women may receive timely attention in maternal and infant health when this is indispensable or, if not, to encourage care by means of traditional medicine and the work of Indigenous birth attendants.

To oversee closely the actions of the military personnel and police forces when they are enforcing the measures taken to combat COVID-19 with Indigenous Peoples, especially the Indigenous women, in order to put a stop to all kinds.”

ECMIA’s report highlights the strength of Indigenous communities during the COVID-19 pandemic, but also makes it painfully clear how much Indigenous women will suffer if further action is not taken by their respective governments or international organizations.