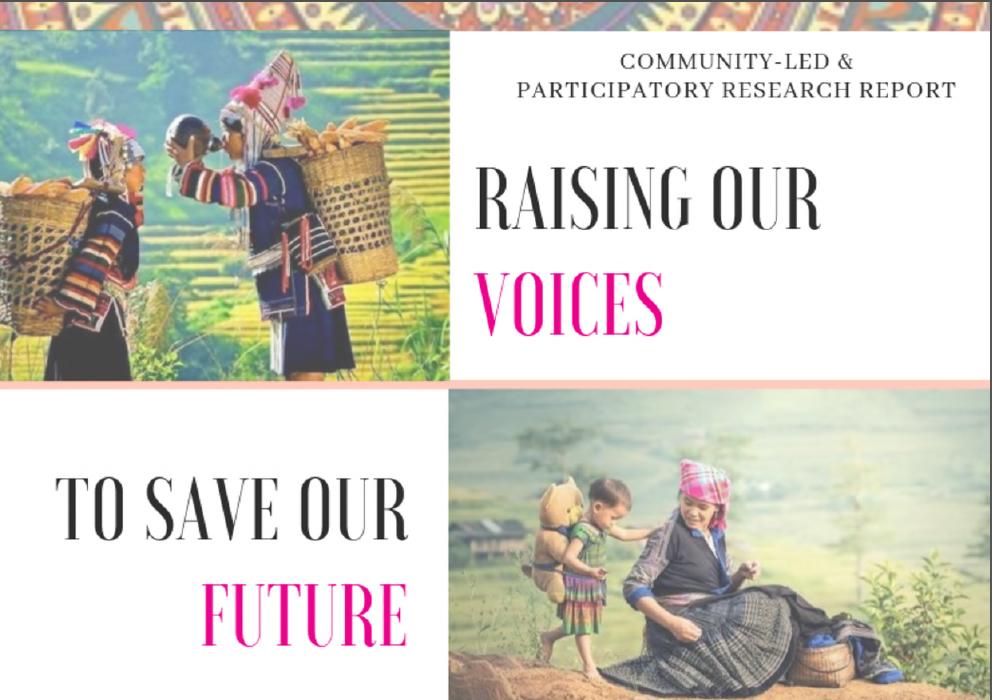 The Indigenous Women’s Network of Thailand (IWNT) and Manushya Foundation released a report, “Raising Our Voices to Save Our Future,” on  September 25, 2019, about the human rights situation of Indigenous women in Thailand. The authors took a hands-on, research-based approach into the challenges faced by Indigenous women and their communities, how  human rights violations affect them and their environments, highlighting the causes of these violations, and offering possible solutions as discussed by Indigenous community members. The goal of the report is to empower women in local communities to document the human rights violations they face in a community-led manner. The report presents four key challenges for human rights of Indigenous women in Thailand in the form of three case studies and two specific cases involving Indigenous rights called “voices from the ground.”

The first case study focuses on Indigenous women’s difficulties in accessing citizenship. In order to gather data, interviews were conducted with 21 people aged 15 to 82 years old, including 12 women and 9 men living in three subdistricts of Omkoi district in the Chiang Mai province in Thailand. Thailand is violating the basic human rights of Indigenous Peoples by denying and stalling them their right to nationality. Twenty one people – mostly women – are facing challenges to obtain citizenship and expressed that this struggle is one experienced by Indigenous people all over the country. Though the Thai government has made a few improvements for this to change in the form of relevant policy and legal changes, it is not enough.

The second case study highlights discrimination faced by Indigenous women in accessing healthcare services. Data was collected through several different methods: one-on-one interviews, group discussions and surveys. In total, 43 women and 17 men between the ages of 18 and 75 years from two villages in Omkoi and Mae Wang districts in Chiang Mai province in Northern Thailand participated in the study. An additional 19 women and 2 men also took part in the focus group discussions from several villages in both districts. The case study concluded that while Thailand has made a lot of progress in providing public healthcare for its citizens, Indigenous Peoples, specifically Indigenous women, face troubles in accessing these services which is a direct violation of their basic human right to health and right to resources. Indigenous women face challenges in the right to health in terms of availability, accessibility, acceptability, and quality. There is a lack in availability of healthcare services and programs, especially for those who are deprived of citizenship. There is also lack of accessibility due to the lack of medical facilities in Indigenous communities and excessive travel fees to healthcare facilities, along with a lack of information on healthcare services, and discrimination by language and ethnicity by medical staff. There is an additional lack of acceptability by not acknowledging Indigenous Peoples’ customary medicines and health systems. Lastly, there is a lack of quality in services and resources for particular health challenges Indigenous women face.

The third case study focused on Indigenous women in frontlines defending their ancestral lands, detailing land rights of the Indigenous Chao Lay people in Southern Thailand from two villages; The Sapum village and the Sireh Island village. Chao Lay is a term used that refers to three Indigenous communities – Moken, Moklen and Urak Lawoi – that live in Southern Thailand. For the Sapum village case researchers reviewed reports from the Chumchonthai Foundation along with official reports from government. The Sireh Island case is based off several pieces of evidence: legal documents, dated pictures, media reports, and official reports of investigation from the National Human Rights Commission of Thailand (NHRCT) and the Office of Public Sector Anti-Corruption Commission (PACC). The case study concluded that the Indigenous Urak Lawoi community face challenges to their rights to consultation and Free, Prior and Informed Consent in decisions affecting them. A community land rights title for Sapum village is seen as necessary to addressing other challenges to their communities and cultures as well as their participation in decision-making. Therefore, it is in the best interest of the Thai government to go forward with the approval process for land title deeds for the village and other communities that might be facing threats of eviction or other risks due to lack of land rights, as Sapum is “only a representative case.” The villager’s also recommended that the Marine Department should take action starting with abolishing its notification for evictions of the village, and from now on initiating conversations in able to gain consent from the Urak Lawoi for any project it wants to start in their communities.

Two additional cases involving the rights of Indigenous women are incorporated as “Voices from the Ground” in the report. The first case, based off media reports concerning businesses trespassing on traditional cemeteries of Indigenous people in the Phang Nga province in Southern Thailand, is relevant to the study involving Indigenous women protecting and defending other Indigenous Peoples’ rights to land and resources. The second case shows the impacts of tourism on Indigenous women and is based on interviews with numerous leaders and villagers in several villages in the Chiang Mai province in Northern Thailand.

Indigenous people in the Chao Lay communities are facing troubling concerns at the hands of land buyers, specifically due to real estate and tourism. Indigenous communities are denied the rights to inhabit and use their own lands, take care of their resources, and participate in decision-making on matters that directly affect them. This case highlights the obstacles to equal participation of Indigenous women in their own communities. Women have especially been subverted in the numerous lawsuits processes by their own elected community representatives. Due to lacking any official titles to their lands, which comes from the belief in land not being possessed or controlled by individuals, Indigenous communities have been exploited and have not only lost their lands and resources but also face prohibited access to constructive solutions for the suffering they have had to endure.

Thailand is a country that has joined the UN Refugee Agency’s #IBelong campaign to end statelessness, even though the government does not actually recognize Indigenous People as citizens, and Thailand has one of the highest numbers of stateless people by country in the world. Lack of citizenship is a basic human right violation, and one in particular that many Indigenous people around the globe face. The country also violates the basic human rights of Indigenous people by denying them other basic human rights, such as the right to equality, the right to self-determination, and the right to lands, territories, and resources. This particularly impacts Indigenous women, who not only face a lack of rights as Indigenous people, but also as women in their communities. Indigenous Peoples’ citizenship must be addressed since their ancestors lived in those lands prior to any nation state being formed. It is also important to elevate the voices and platforms of Indigenous women to lead their communities.