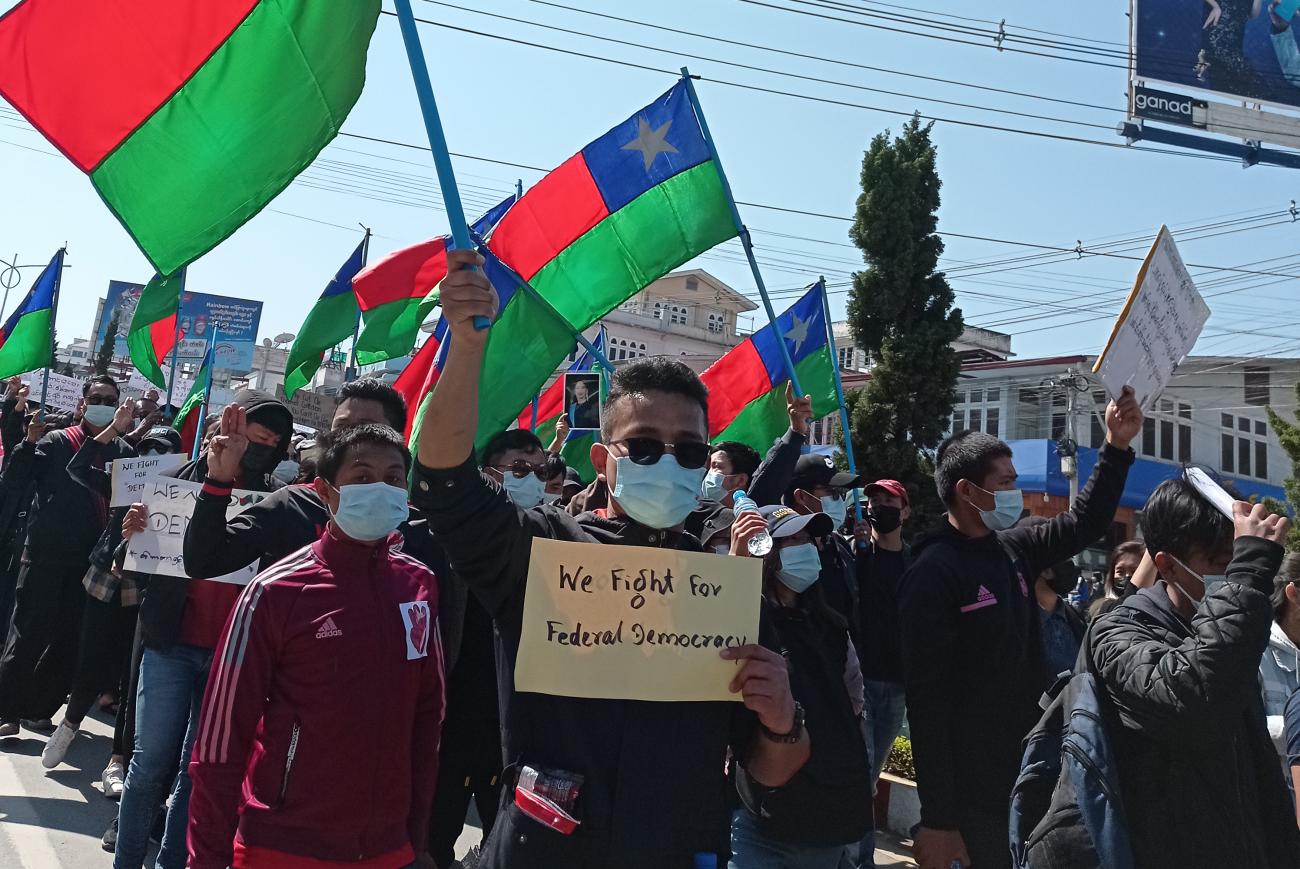 In the early hours of February 1, 2021, as Myanmar (formerly known as Burma) was preparing for the first session of the newly elected parliament since the country’s November 8, 2020 election, its military forces seized control of the country. Myanmar’s military conducted a house raid and arrested several elected leaders, cabinet ministers, the chief ministers of several regions, opposition politicians, activists including the country’s president, Win Myint, and state counsellor, Aung San Suu Kyi.


The military coup mainly resulted from accusations of election fraud during the November 2020 election, in which the National League for Democracy, the country’s leading civilian party, won 83 percent of the body’s available seats. After the coup, the Myanmar military declared a state of emergency and imposed curfews putting restrictions on public gatherings. The internet, telephone services, and television broadcasts were suspended, blocking access to media and communications. International flights were suspended.

In the month since the coup, mass protests have been taking place across Myanmar opposing the military move. Some of the protests have turned deadly. The media reports reveal that close to 1,000 people had been detained, including high profile leaders of the civilian government. Many are kept under house arrest with no outside contact and in most cases, their whereabouts are unknown. There are also reports that dozens of protestors have died while many human rights defenders have been threatened and went into hiding.


“I felt as if the whole world was collapsing, everything was chaotic and I felt hopelessness,” says Khun Khit San, a young Indigenous leader, sharing an experience about February 1, the first day of the military coup. “Until the internet, telephone, and other communication means were resumed, everything was finished. The president, MPs, and all high ranking officials were detained by the military.” 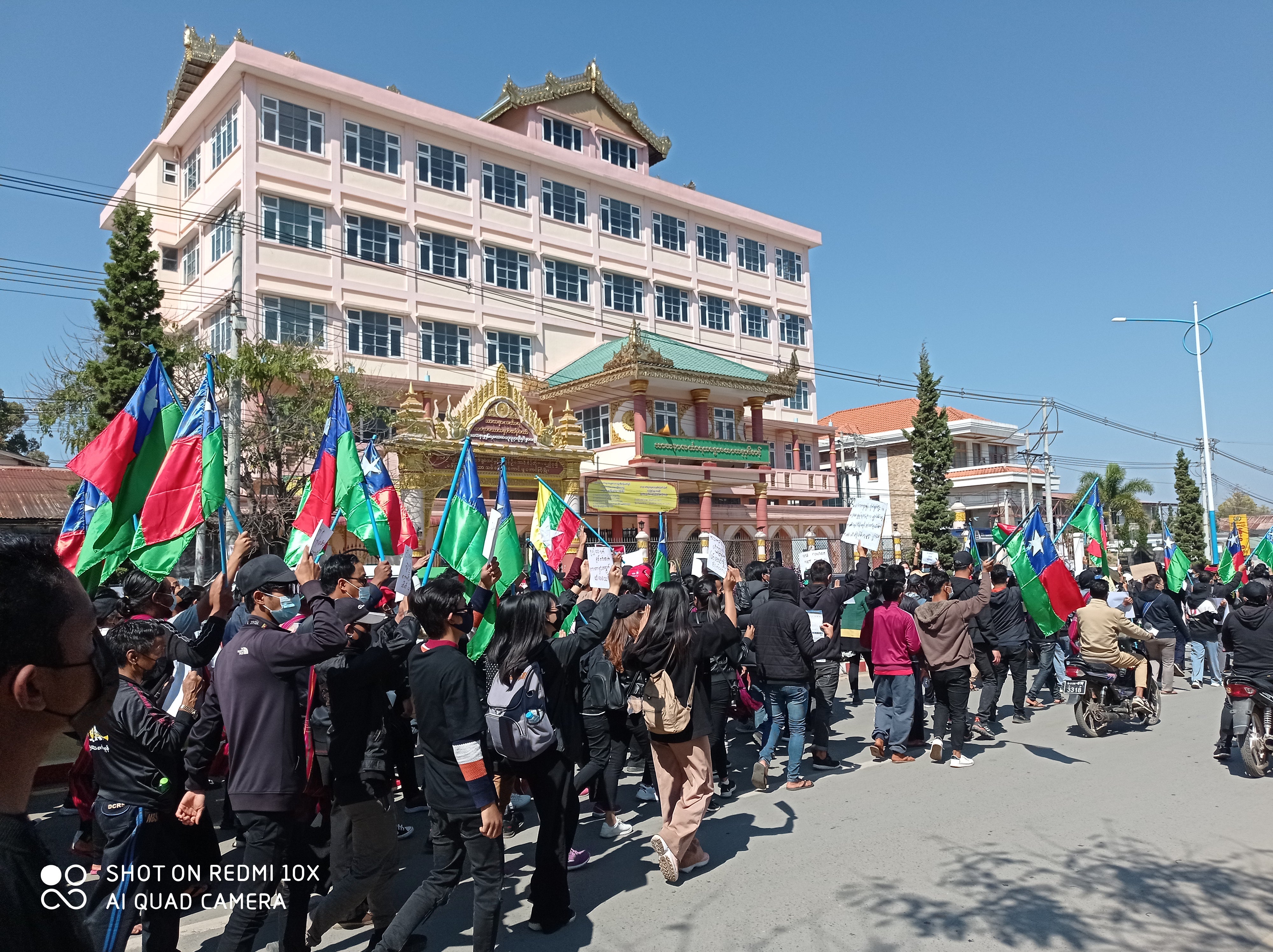 Ethnic Burmans known as the Bamar, have enjoyed privileged positions, holding a majority of government and military positions, while many ethnic minority groups have faced systematic discrimination, lack of economic opportunities, minimal or no representation in the government and abuse mostly at the hands of  the military. Myanmar is also considered to be home to the world’s longest-running civil war. Throughout the past almost seven decades, the civil war has mostly taken place in the areas home to Indigenous Peoples, resulting in massive human rights abuses against Indigenous Peoples. However, this fact has never captured much international attention. The militarization of many Indigenous lands continues to this day. For decades, Indigenous Peoples have faced arbitrary detention, extrajudicial killing, and other hardships under the dictatorship.

Before 1948, when Myanmar achieved independence from the British, Indigenous Peoples had self-administered regions/federated states in their respective territories which they occupied for more than a century.  But the civil war in Myanmar started just a month after the country’s independence from Britain in 1948. Later in 1962, the military took power and ruled the country for over 70 years. During the decades, dozens of ethnic groups have taken up arms against the central government and army. The ethnic insurgency has been responded to with brutal repression by the military. Indigenous Peoples, mostly in remote areas, have experienced living under military regime for decades in the past and they understand what military coup means. Khun Khit San, an Indigenous youth leader, as a child witnessed the violence, prosecution, and repression by the military.


“Military power actually is not something new for me and us. I was born in 1988 and since I was born, I have lived under military rule. I had to run a lot when I was studying in high school. I still recall when my father had to hide several times. Villagers were harshly beaten by the military, their food stocks and houses were burnt down. We have lost many relatives and young children because of repressive rulings of the military dictatorship,” says Khun Khit San. “I saw lots of fighting in my village. My parents always had to run from the violence. I saw people beaten by the military. I am so worried about my future and the future of my generation.”


Ever since the military rule in 1962,  Indigenous Peoples in Myanmar have faced countless consequences from forced labor, physical violence, and confiscation of their properties. Thus, people have been weary of the military for decades. People are tired. There is fear of returning to the oppressive regime under which they once lived. People from all walks of lives are making their opposition known in the streets now. 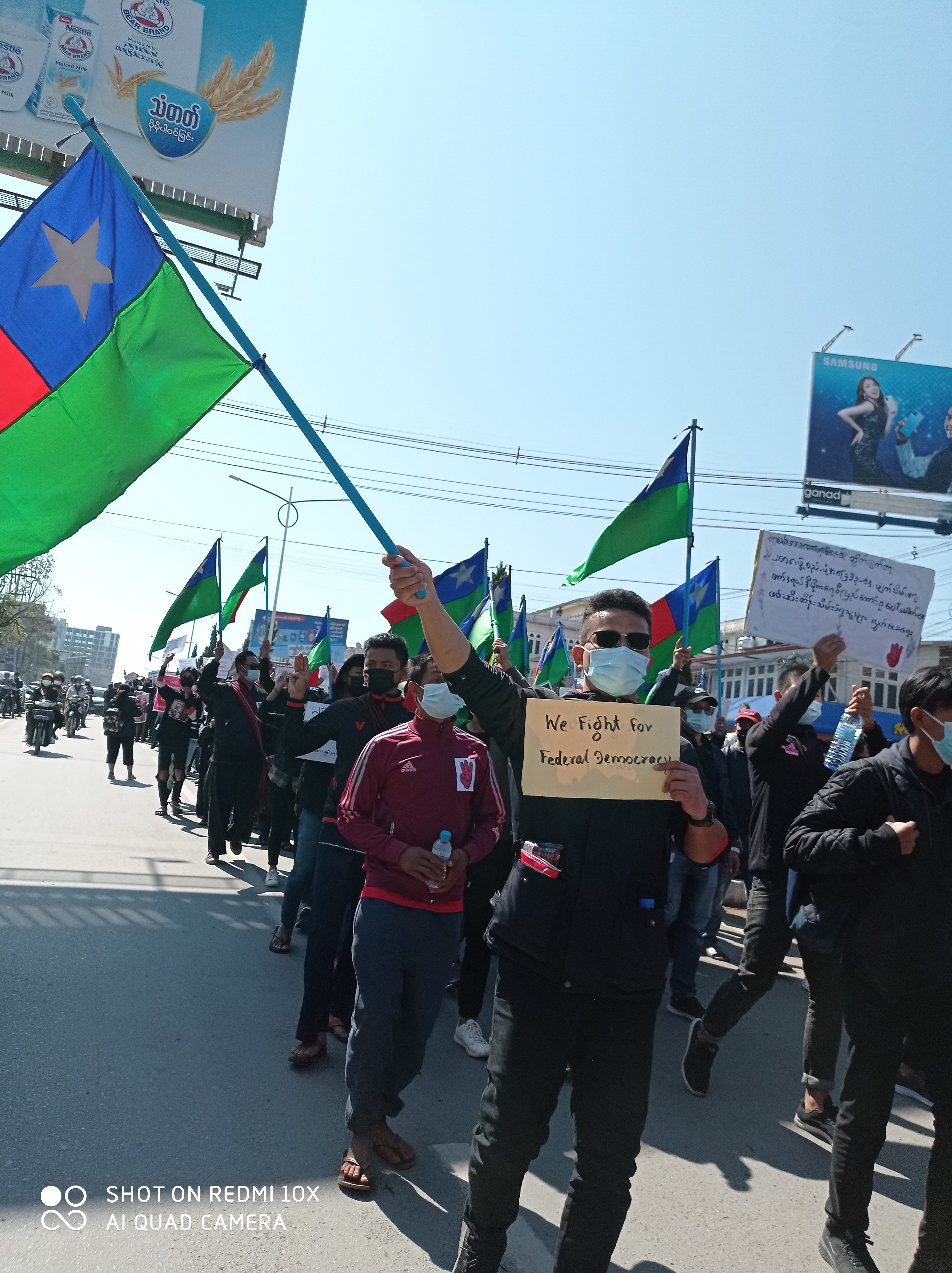 Indigenous women are among the most vulnerable to the military regime. They have experienced high rates of sexual assault and rape by armed forces. Women are the ones going to the forest to forage food and doing much of the farming. When they are alone they are never safe. It is perhaps because of past experiences of such grave human rights abuses that Indigenous women are now leading the movement against this military coup.


Since 2011, the year when the quasi-democracy began, when parliamentary elections were held and other reforms were made, Myanmar has been trying to overcome the problem that the public has had to face for the last 70 years or so.  The government had just started to address the problems of the displacement of thousands of families and started to address rights violations.


The signs of dictatorship are felt by the general public of Myanmar, mostly Indigenous Peoples, and angry people are taking to the streets. Youth from different backgrounds are also protesting, and civil servants stopped going to work, joining the movement. A number of police officers and public officials have joined the demonstrations.

Indigenous Peoples in Myanmar have organized sporadically in the past 10 years. Indigenous Peoples organizations have flourished, as people delved into understanding their rights, and started to speak up against the violations at local, national, and international levels. Indigenous leaders have been on the rosters of the UN headquarters in New York and Geneva making their voices heard about human rights violations committed by both the military and secular governments.


On February 12, 2021, the Ethnic Nationalities Network, a 28-member alliance working on Indigenous rights, mostly youth, came together in a protest against the military coup and in support of the nation-wide protest against authoritarianism. According to Network, the military has always been an actor that has prohibited Indigenous Peoples from achieving self-determination. The military’s “divide and rule” techniques among different ethnic nationalities, have created obstacles for ethnic groups to come together on issues of land, territory, and self-determination.

Demands made by Indigenous Peoples are different from the demands made by the general public. The general public is demanding the release of those arrested, the resumption of the parliament session, and the acceptance of the election results. Indigenous communities are demanding to abolish the current 2008 constitution, which according to them is not democratic in terms of value and standards. Similarly, they are also demanding the formation of a federal democratic government with equal and meaningful representation of different ethnic nationalities, ensuring the right to equality and non-discrimination.  The 2008 constitution was drafted by the military and the military still controls both the legislative and executive branches.


“For the past 10 years, people, including myself, felt liberated. But unfortunately the military retook power ignoring civilian power. Now the sense of liberation is taken back, the sense of freedom and dignity is already taken away,” says Mai Thin Yu Mon, further adding, “but we have had a sense of enjoying democracy since 2011. We elected our representatives to the parliament. The coup has now removed our representation.”


“We fear a lot, there is not a single Indigenous community who did not experience the human rights violations. Almost all of them had to conduct forced labor, their lands were confiscated,” says Mai Thin Yu Mon. “The military brutally attacked Indigenous Peoples as in the civil war. With this military coup, we foresee more military violations in our territories.”


According to Mai Thin Yu Mon, the military coup is an opportunity for Indigenous Peoples to abolish the 2008 constitution and move towards a more inclusive and more practical law that guarantees Indigenous Peoples’ right to self-determination, equality, non-discrimination and meaningful participation in government and at all decision making levels.

Issuing a joint statement on February 26, 23 UN human rights experts called on the Myanmar military to immediately end the violent crackdown on peaceful protests against the coup and guarantee freedom of expression. They also called on the international community to continue to push for the respect of the will of the people of Myanmar and for the peaceful return of power to the civilian government.

UN Secretary General, Antonio Guterres, urged the international community “to come together and send a clear signal to the military that it must respect the will of the people of Myanmar as expressed through election and stop the repression.”

Many other members of the international community have condemned the coup and are putting pressure on Myanmar to restore democracy. Similarly, threatening to impose sanctions in response to the coup, the United States called for “an immediate return to democracy.” The United Kingdom also announced asset freezes and travel bans of three generals in Myanmar earlier this month and further called to put in place new measures to prevent United Kingdom aid in indirectly helping the military regime. The UN Security Council has also been pushed for more “intense discussions” on Myanmar in March.


International allies can support the work of civil society in Myanmar extending moral and financial support in their campaigns during these times. Protection and security now and in the future for human rights defenders and activists is also necessary, because the military has already started to crack down on activists. The immediate step is to hand over power to the recently elected representatives and restore the governing system. For Indigenous Peoples, struggle will be ongoing until the 2008 constitution is abolished and the country is restructured based on democratic principles.

People from all walks of life, including women, youth, the general public are intensely engaged in the protests. Because the protests are absent of individual leaders, the movement is regarded to be a real people’s movement. There is a clear message that this generation does not want to go back to the dark times of dictatorship. Young Indigenous activists are doing everything they can to ensure that the country chooses the path of freedom. They are able to access information, are aware of their rights and therefore are coming out and demanding their rights. “I am happy to see, they are building, networking, and coming together to fight for freedom. They are committed not to stop fighting until the military gives up power,” says Khun Khit San. “We never give up, we continue fighting for our freedom, dignity, and for our future.” 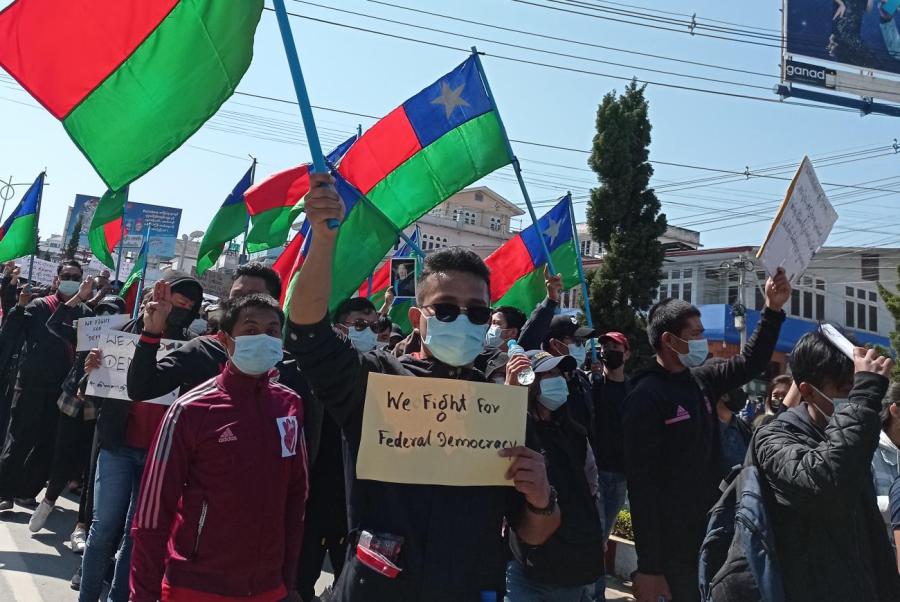