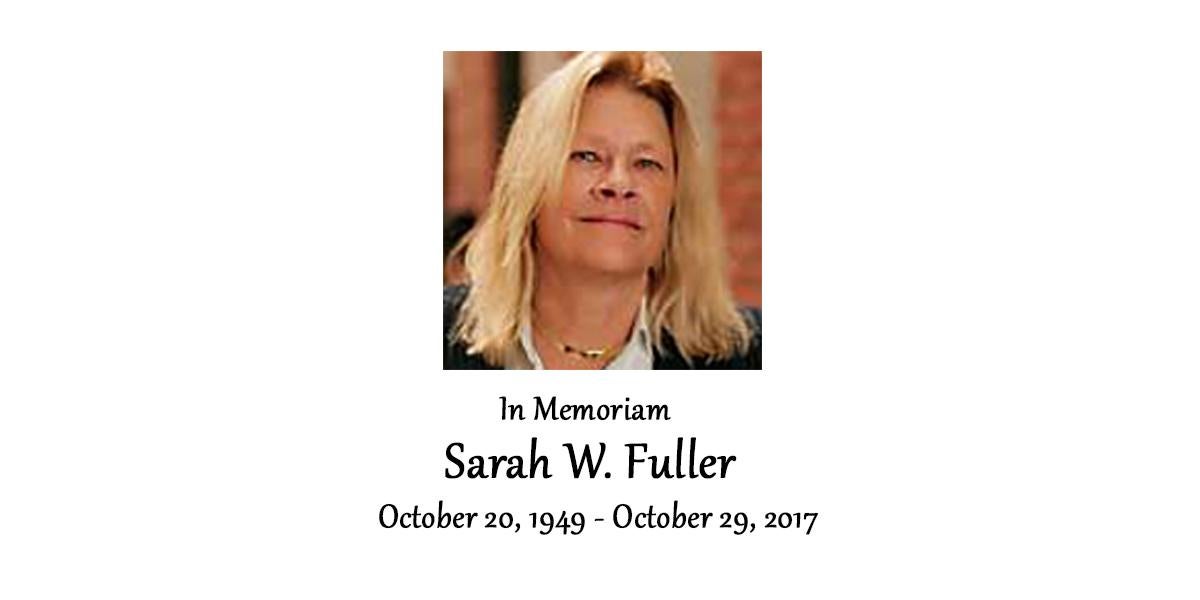 It is with great sadness we mourn the loss of Sarah W. Fuller, the chair of Cultural Survival’s board of directors. Sarah was a champion for Cultural Survival and a generous and committed benefactor. Sarah often spoke of her deep commitment to Cultural Survival’s stewardship stemming from her relationship with and admiration for our co-founders David Maybury-Lewis' and his wife Pia’s work with Indigenous Peoples.

Sarah joined the board of directors of Cultural Survival in 1997, eventually becoming the treasurer, and then chairperson of the board. She skilfully advised and guided the organization through changing leadership and financial ups and downs. “Sarah became a board member a few months before I joined the staff,” recalls Mark Camp, Cultural Survival Deputy Executive Director, “I worked very closely with her since the beginning, she was always there for us. She was a key partner in growing Cultural Survival. In 20 years, we went from five staff members in Cambridge, MA, to 20 staff in seven countries. She will be deeply missed. It is a huge loss for our community.”

“Sarah will be deeply missed by Cultural Survival’s board of directors and the staff. She was a great visionary and leader in her support of our organization. Her dedication to the work of Cultural Survival with Indigenous Peoples was reflected throughout her service as chair of the board and in her philanthropic generosity. It was my honor to work with Sarah and I will miss Sarah’s presence in my leadership of the organization. More importantly, we all acknowledge that Sarah is beautifully woven into the tapestry of Cultural Survival, the fabric that give us strength and resilience. Ahéhee', with appreciation,” said Suzanne Benally, Cultural Survival Executive Director.

Sarah was a pioneer and inspiration for women in business and led an impressive career. She received a Bachelor of Arts from the University of Pennsylvania and a Master’s Degree from Harvard University. Sarah served as the president at AMR/Arlington Medical Resources, Inc. and was the co-founder, president and chief operating officer of Decision Resources Group. She was responsible for the overall operations of Decision Resources, Inc. She served as president emeritus of Decision Resources and acting president of HealthLeaders-InterStudy. She oversaw all new product initiatives. Previously, Sarah served as vice president of Arthur D. Little, Inc., from which she co-led a buyout of Arthur D. Little Decision Resources in 1990. She served as executive chairman of Millennium Prevention Inc. She also was the director at Halloran Consulting and The Forbes Consulting Group, a trustee of the University of Pennsylvania, director of MedPanel, LLC, and director of Cytel Inc. Sarah also served on the Board of Overseers and the Huntsman and Life Sciences and Management advisory boards for the University. She also served on the board of trustees at Plimoth Plantation.

Sarah passed away suddenly on October 29, 2017. She was 68 years old. Our hearts and prayers go out to her husband and family.

We will share funeral arrangements once the information is made available.