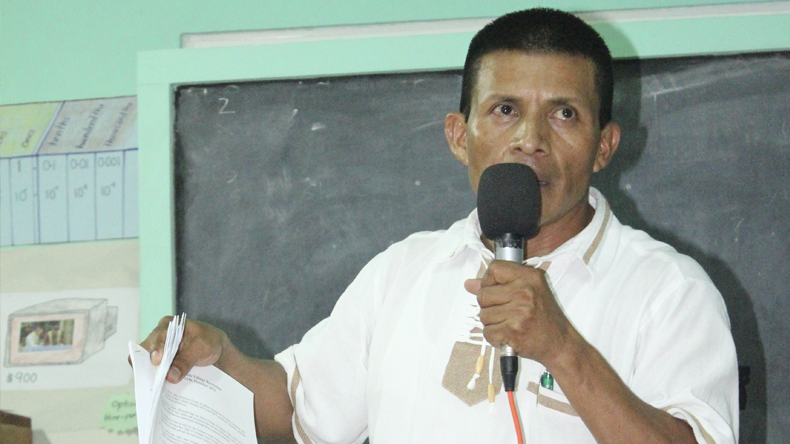 Imagine this scene: a bus hurdles over the dirt roads of thick, tropical rainforest in southern Belize. It travels from village to village picking up Maya who are panicked and confused about oil drilling on their ancestral lands. Instead of going directly to the meeting, the Maya must first listen to a two-hour presentation by the oil company. Once they finally arrive, they gather for a traditional blessing, which is how they start every meeting. They are told there is no time for that. In fact, they have only one minute. As the appointed representative, I start to speak. After 60 seconds, a government official, backed by police and military personnel, pries the microphone out of my hands. Apparently, the meaning of “consultation” is lost in translation from English to Q’eqchi.

The story I am about to tell is more than an ordinary parable: it is a tale with implications for a people’s survival or extinction. The Maya of Belize established the first legal precedent for the United Nations Declaration on the Rights of Indigenous Peoples. Now we are ready to do the same for the right of Free, Prior and Informed Consent.

The true beginning of this story is the morning in 1997 when several Maya villages woke up to learn that their ancestral land had been declared a national park—and that it had been so designated for three years. Community elders wondered why it had taken so long for the government to let them know. Five years later, they know that secrecy is official government policy on Maya land.

The Belize government has long recognized the area between the Sarstoon and Temash Rivers as the “least disturbed wildlands” in the country. Following the state’s designation of the Sarstoon Temash National Park, the Ramsar Convention on Wetlands classified its 42,000 acres as land of “international importance.” More recently, researchers have uncovered a rare and entirely new ecosystem in the park. Research acknowledges that the Maya have managed these forests for millennia, to the point that we are considered responsible for the wide diversity of tree species. As the National Geographic Society recently noted, “What might appear to be ‘primary’ or ‘pristine’ forests are likely remnants of ancient Maya agroforestry systems.”

For a country that prides itself on low deforestation, trees in the Toledo District were already being felled at a rate of 10 percent a year even before Prime Minister Dean Barrows made his infamous vow, “drill we will.” The government had already handed out leases to 41 percent of communal land to commercial loggers and other interests, even when communities were actively farming the land. In hindsight, the prime minister’s off-handed comment to the press about drilling constitutes the only direct, official word Maya communities have ever received about the government’s intentions for their land.

Back in 1997, the elders were told it was necessary to legally establish the communities as park “co-managers.” At first they thought giving a permit to explore for oil was a strange way to protect a park. Since their communities were the most impoverished in the country, they certainly understood the economic pressures on Belize; the skeletons of failed government experiments in cash crops on Maya land, all of the withered fields abandoned on the side of road, speak to the futility of shortsighted schemes. So, they created the Sarstoon Temash Institute for Indigenous Management (SATIIM) as their administrative body to meet their co-management obligations.

Imagine their surprise to learn four years later that the government had entered into a Production Sharing Agreement with the local subsidiary of a small energy exploration company based in the American southwest, US Capital Energy. The company was granted the exclusive right to conduct petroleum operations within a 12 square mile area of the park called Block 19. Park rangers reported that dynamite explosions had cleared paths wide enough for jeeps to drive across to the Guatemalan border, giving poachers and loggers access to virgin forest.

Upon this discovery, the elders held community meetings long into the night. They decided that SATIIM would object to the permit as a violation of the National Park System Act. In response, the government simply ignored its “partners.” So in 2006, the elders reluctantly instructed the Institute to file a lawsuit to stop the activity. The Supreme Court of Belize ultimately decided that an environmental impact assessment was prerequisite for an exploration permit, and the permit was temporarily put on hold—but for how long?

In the meantime, the elders were advised to legally establish their right to land they had occupied for millennia. In 2007 the Supreme Court decided a landmark judgment that gave the nearby Maya villages of Conejo and Santa Cruz full legal ownership over their lands and its resources. In 2010 the remaining Mopan and Q’eqchi villages in Toledo District won similar land recognition. These historic judgments made international news when the Maya held the Belize government to its commitments under the UN Declaration on the Rights of Indigenous Peoples, setting a new legal precedent as its first domestic application. The government’s appeal resulted in an injunction that prohibited activities on Maya lands until the appellate court decided the case.

During this time, the Maya realized that they also needed to take their case to the people of Belize. They organized a national oil summit to discuss the issue on all sides. Ultimately, all major organizations publicly condemned oil drilling on protect lands. Yet the government acted as if public opinion and consistent court rulings simply did not matter and secretly granted a new permit in late 2010.

In 2011 the Maya woke up to another surprise: the sound of explosions right outside their village. Without any warning, US Capital Energy had cleared some four miles of forest. Additionally, seismic testing ignited a massive fire that destroyed more than 400 acres of the newly discovered ecosystem. Panicked Conejo residents asked SATIIM to assess fire damages, and independent experts were contracted to research the concept of Free, Prior and Informed Consent. It became evident that the government was obligated under both domestic and international law to obtain consent for oil activity on Maya lands, which it clearly had not done. Meanwhile, US Capital Energy started to court certain villages, painting school rooms and offering services of trash disposal and limited contract employment. But the company showed its true colors after media reports on the environmental damage it had caused: it threatened SATIIM with legal action.

We now reach the final chapter of our story, although this ordeal is far from over. This past October, under the guise of “consultation,” Maya villagers were asked to review a 300-page document—in English—at the height of the harvest season. When SATIIM requested to move the review date by a few weeks, the government refused. At this point, the elders feel they have exhausted all good faith options. On behalf of the four communities likely to be affected by the exploratory drilling, SATIIM has retained a major US law firm. So, instead of answers, we are left with a question: Will another lawsuit be enough to save us from extinction?