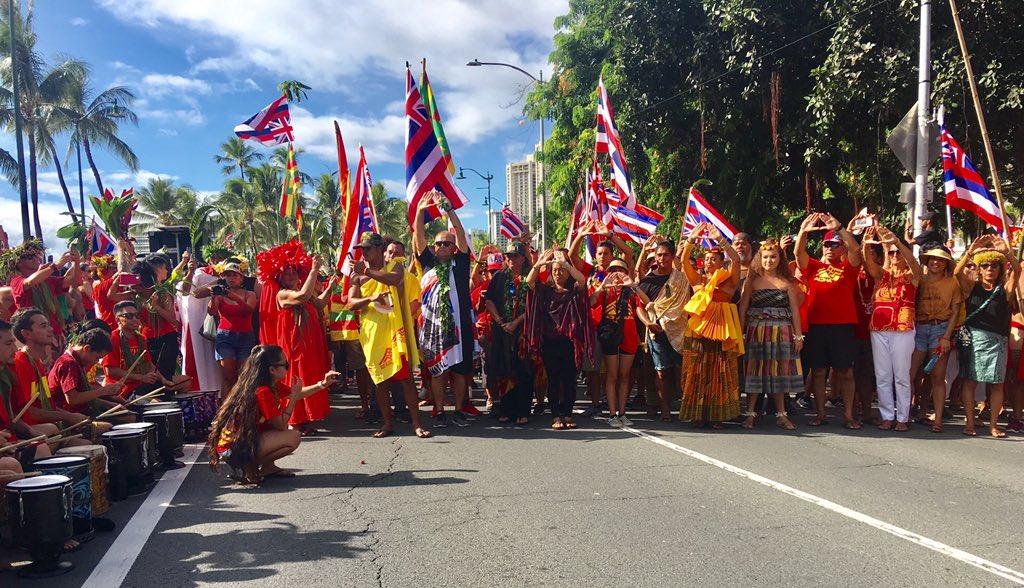 It has been three months since the construction of the 30-meter observatory was planned to begin on the Mauna Kea summit and has since been blockaded by the mobilization of Indigenous Hawaiian and allied peoples to protect the right to maintain their practices that would be jeopardized by the observatory. On September 20, 2019, 28 of the 38 protectors arrested on July 17 have plead not guilty before the Hilo Court. Days later, one of those arrested and pleading not-guilty, testified before the Office of Hawaiian Affairs. Dr. Noe Noe Wong-Wilson, executive director of the Lālākea Foundation, spoke on the controversial issue of the protector’s camp along the highway. Dr. Wong-Wilson testified to the Office that the protectors were not blocking any of the public from accessing public land surrounding Mauna Kea, rather it was the Governor’s office and law enforcement who were restricting access. Additionally, in the latter half of August and beginning weeks of September international attention and Indigenous led advocacy have increased and continued to place pressure upon the state of Hawaii and the TMT International Observatory.

On September 17, Puʻuhonua o Puʻuhuluhulu released a press statement condemning what they perceive as misconduct, harassment, and intimidation from law enforcement officers. The press statement presents an increasing documentation of instances of harassment and intimidation by law enforcement officers and the protectors of the Mauna Kea. Relatedly, a few days before on September 14, Expert Member of the UN Permanent Forum on Indigenous Issues, Tarcila Rivera Zea (Quechua) issued a public letter to Governor Inge of Hawaii. Rivera Zea articulated her position of solidarity with the protectors and urged Governor Inge to follow articles and recommendations outlined in the UN Declaration on the Rights of Indigenous Peoples in respecting their human rights and rights as Indigenous Peoples.

In her letter Rivera Zea wrote: “Building the Thirty Meter Telescope goes against the territorial, cultural and spiritual rights of the Indigenous Peoples of Hawaii. According to the United Nations Declaration on the Rights of Indigenous Issues (UNDRIP), Indigenous Peoples have the right “to own, use, develop and control” their lands and “to use to maintain and strengthen their distinctive spiritual relationship with their traditionally owned or otherwise occupied and used lands.” Additionally, the Permanent Forum asked States on its 17th Session to acknowledge the collective rights of Indigenous Peoples to their lands, territories and resources and urged them to take measures to ensure the exercise of these rights.”

In addition to Articles 2 and 25, as referenced above, the Expert Member of the UN Permanent Forum on Indigenous Issues also references Article 12: “Indigenous peoples have the right to manifest, practice, develop and teach their spiritual and religious traditions, customs and ceremonies; the right to maintain, protect, and have access in privacy to their religious and cultural sites. Allowing the desecration of Mauna Kea, putting at risk its biodiversity and ecosystem, and preventing Indigenous Peoples from carrying out their spiritual traditions, the government is ignoring the above mentioned rights.”

Rivera Zia highlights a deeply important aspect of the evolution of the protector’s struggle of defending the Mauna Kea- it is both at the same time protection of the rights to self-determination, territorial sovereignty, and spiritual autonomy of Indigenous Peoples. Rights that the protectors identify as undeniable and indivisible.

As reported in an NConline article, “The mountain is a symbol of the most sacred attached to the ... realm of the gods," said Pua Case, one of the leaders of the protectors. "If we don't stand for that, what will we stand for?" The reporting highlights the profound intertwining of spiritual practice and self-determination, covering the Labor Day weekend over the beginning of September and the many workshops and visitors from many different Indigenous Peoples.

The Canadian TMT Advisory Committee recently posted a statement, acknowledging that as of now there is no moving forward with their planned construction “without negotiation.” What negotiation will encompass is left unclear. For now, protectors remain blockading the TMT construction asserting their rights as Kanaka Maoli, Indigenous Hawaiian Peoples.

On October 4, Thirty Meter Telescope supporters gathered at the state Capitol along with land protectors at a forum. The supporters argued that “culture and science can coexist on Mauna Kea.” However, the unrest unravelled and people on both sides grew heated, with many others wondering if tensions between the two groups would cease. Makana Silva, a Native Hawaiian student was upset at what he witnessed, saying, “We’re just tearing each other down. As much as the lahui is building within our own communities, people are being torn apart.” Silva along with another panelist Steve King went out and spoke to leaders on Mauna Kea. Several other panelists argued that though Hawaiians throughout history “may have been sharing too much, perhaps not,” the telescope is an advancement that Hawaiians should look at with pride. But many others disagreed. Kumu Hinaleimona Wong-Kalu, a land defender against the formation of the telescope, said people will continue to take action and fight against it.

Daily protectors continue to gather and demand protection of Mauna Kea. On October 5, thousands of red shirts made waves across Waikiki at the Ala Moana Park for the Aloha Aina We Rise Unity march. Locals wanted to show Hawaiian officials and leaders they will not stand by while their lands continue to be invaded and taken from Indigenous Peoples. The event organizer, Hinaleimoana Wong-Kalu discussed how important it is to remind people that the Hawaiian people stand together and unify to show the world that they are still at the forefront of what is going on in their homeland. Wong-Kalu discussed how since colonization, invaders attempted to silence Indigenous voices that spoke out for their land. Tehani Gonzado discussed how important it was for people to rally: “We’re the land. We’re the sky. We’re everything around us and if we don’t do this [march] today my babies will forget. So it’s super important. It’s really important for us all to be here and be here as an ohana.”

Not everyone agrees with this approach. Sam King, a lawyer for the non-profit collaboration Imua TMT, had a personal message for the protectors at the event: “At this point, marches are not helping achieve a resolution… We reiterate our invitation to the protectors/protectors/Kia’i to join us in a conversation. They can reach us through our website.” Yet, protectors continue to organize and march in honor of their ancestral home, to show the world: “we have not forgotten, we will not forget, and we will continue to remember so we can keep fighting.”