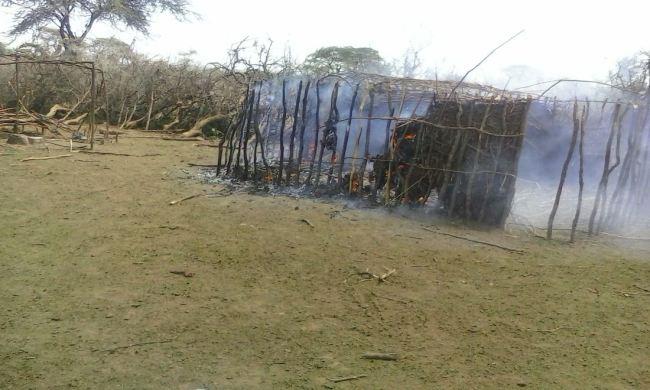 After months of government threats, eviction became a reality yesterday for the Maasai of Loliondo, Tanzania, in the Western Serengeti. According to reports from a Maasai source in Tanzania, Tanzanian government forces have entered villages and Maasai homes have been burned. The evictions reportedly started on Thursday, February 12 and continued through today.

Tanzanian officials announced plans to sell 1,500 square kilometers of Maasai land in the fall of 2014, to a private luxury hunting and safari company based in the United Arab Emirates. The sale would evict 40,000 pastoralist Maasai from their ancestral lands. Although the president of Tanzania pledged to never evict the Maasai people less than 3 months ago, photos from Loliondo today prove that he has reneged on his promise.

“Maasai homes have been burnt to give room for wealthy Arabs to hunt lions and leopards [in] the Serengeti ecosystem,” said a Maasai source. “We are continuously made homeless by our government… Had it been not the love we have for nature and wildlife, the Serengeti ecosystem would have been like other places in Tanzania where people have depleted the forest cover for charcoal and decimated animal species for food and other utilitarian goods.”

A burning home during the Loliondo eviction of Maasai in Tanzania. The eviction started Thursday, February 12 and continued through Friday February 13. [photo credit: Fredy Ledidi]