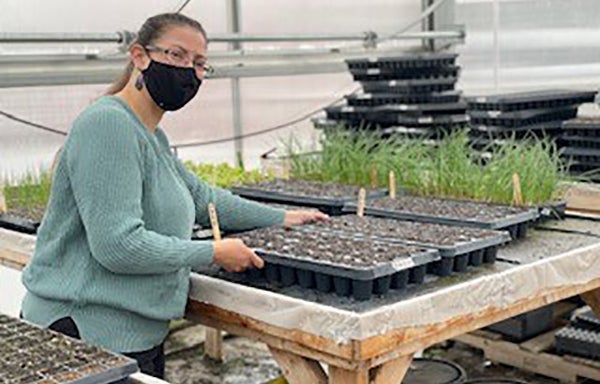 Elizabeth James-Perry (Aquinnah Wampanoag) is a multimedia artist who has dedicated her life to reviving and honoring Northeastern Woodlands Native Peoples and cultures. James-Perry's work celebrates her Native roots as an enrolled member of the Wampanoag Tribe of Gay Head, from Noepe (Martha’s Vineyard, MA), telling stories that honor the importance of relationship to place and to land. Through time-honored wampum shell carving techniques, as well as natural dyeing processes, James-Perry creates a variety of beautiful jewelry, sashes, bags, baskets, and museum-quality textile arts. Wampum is cut from the distinctive purple and white Quahog shell, a species that lives in the coastal waters between Maine and Long Island, New York. Quahog clams have been harvested for food and crafted into jewelry by the coastal Peoples of the Northeastern region since time immemorial.

For generations, James-Perry's ancestors have been living in close relationship with their lands and the sea. James-Perry reflects on how the rhythms of her life change along with the seasons. She enjoys the long and quiet winter days to be more creative and during the warmer days she's “normally outside doing a lot of gardening and growing a lot of my plants for spinning and weaving and some dye plants as well” which are used for the art pieces. As a Northeast Coast Tribal person, it is a challenge to see natural lush landscapes constantly disappear due to land development and, for artists such as Elizabeth James-Perry, it is especially challenging given that most of the inspiration for her art, as well as the materials, is drawn from the environment which surrounds her. She mentions that she's seen “less and less and less natural resources that are freely available to Tribal members.”

For her wampum shell art, James-Perry draws a lot of her creative inspiration from the local fauna, and likes “to carve a lot of marine life, such as whales, which are very important to my Tribe, fish species, seals… and sea mink which is now extinct.” Carving these creatures, both alive and extinct, is done as a way to honor and remember them. Species extinctions, climate change, and land loss are all hard on the Earth and its inhabitants. James-Perry mentions that “culture and art gives me a way to navigate all that. It helps me to have a vehicle to look at climate change” and to operate through these uncertain times, especially during the pandemic.

Last year, for her exhibit at the Museum of Fine Art in Boston, titled “Raven Reshapes Boston: A Native Corn Garden at the MFA”, James-Perry used Indigenous planting techniques to cultivate a garden of corn, beans, and sedges that would surround the 1909 Cyrus Dallin's sculpture of an invented Indigenous man. The garden was designed to be shaped as a horseshoe crab to reflect the interdependence of her native culture with the sea which they have been harvesting since ancient times. She mentions that Boston “hasn't, until more recently, done outreach to be inclusive of [Indigenous] voices or arts,” so she took this garden as an opportunity to portray Northeastern Native identity and to “plant a seed, metaphorically and literally, and encourage that sense of relationship to place and land.” Art goes beyond museum walls, art can be living. The idea of bringing living art was done in hopes to engage people in a different, more inclusive way; of bringing a bit of green back into a city; and of honoring the natural local landscapes that used to exist in that area.

James-Perry currently has a diversity of projects and pieces being exhibited, including a hand-woven twine bag and a wampum belt at the Rhode Island School of Design (RISD) Museum in Providence, Rhode Island, as well as the Bear Map Series. Wampum belts were and are created by Native Peoples as treaties between Tribal Nations, symbolizing ongoing commitments to reciprocity. The Bear Map Series, which she also calls “decolonized maps,” are created with the intention to “foreground my traditional values towards the land and the idea of native stewardship, so I started to create these native maps with just the native place names… to try and bring that native language to the forefront.” One map is currently being exhibited at Boston University along with a white wampum belt which she also created, and another is showcased at the Fruitlands Museum in Harvard, Massachusetts.

James-Perry is currently completing an artist residency at Amherst College, where she is also teaching a few workshops, including a natural dye workshop in which she showed her students how to create natural dyes with local, natural resources such as black walnuts, sumac berries, and sage orange. She is also working on an exhibit set to take place during Fall 2022, for the Mead Museum and many of her art pieces, including The Bear Maps Series, will be included.

James-Perry reminds people “to take the time to live in the moment…” and even though “we might be dealing with a pandemic and climate change… and economic blows, it's really important to balance that out with taking some time for well being and creativity.”

All photos courtesy of Elizabeth James-Perry.