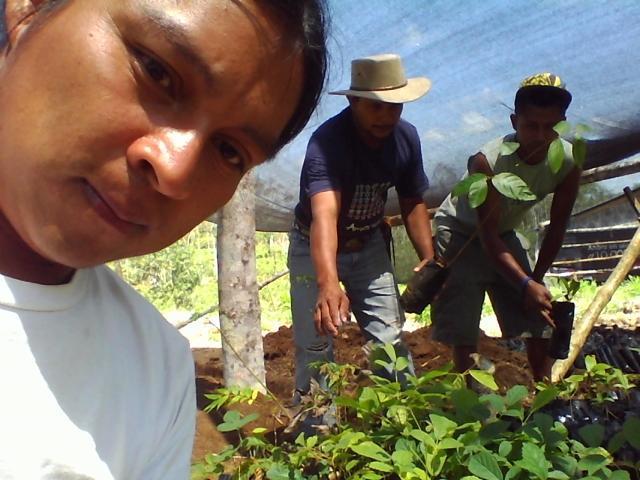 Nestled inside a narrow moat of rainforest between the famous Arenal volcano and the Nicaraguan border lies the Maleku Indigenous Reserve of Guatuso, Costa Rica. Within the three small neighborhoods inside the reserve – Palenque Tonjibe, Palenque Margarita, and Palenque El Sol – around six hundred Maleku spend their days farming the land, painting wooden masks and jícara, or gourd bowls, performing for tourists in their traditional palm clothing, or planting trees in an ongoing reforestation effort.

“The life of a Maleku means struggle, work, and effort, but before all, humility,” says Alcides Elizondo Castro, a community leader and member of the Association for the Development of the Indigenous Maleku Territory.

The sacred tree that once sheltered a legendary Maleku man from a ravenous jaguar starkly contrasts with the pattern of colored concrete homes and ambling cows that characterize the palenques. In the valley below the tree sits an American-style ranch cushioned by acres of cultivated land. This was home to a non-Maleku who had taken over that plot years ago.

It turns out that the Maleku inhabit only fifteen percent of their government-granted territory; non-Indigenous whites have usurped the majority of the land.

“Whites, non-Maleku people, came to Maleku and found fertile, virgin forests, and they were moved by the beautiful land,” Alcides explains. “Later, they brought hunting dogs and exchanged goods for large extensions of land, at the same time deceiving and taking advantage of the innocence of our ancestors. In this way, we lost the land little by little.”

Last year, however, the Maleku launched a movement to repossess their lost territory.

On December 10, 2012, members of the Maleku community entered a ‘privately owned’ estate within the Guatuso Reserve, beginning an occupation that has lasted more than three months.

“We analyzed the injustice and deception our ancestors had suffered in the past and decided to [take action to] honor the existing laws,” says Elizondo Castro. They continue to camp on the property asserting their government entitlement.

The Maleku territory falls under the protection of Article 3 of Costa Rica’s 1977 Indigenous law (N°6172) and Article 8b of the United Nations Declaration on the Rights of Indigenous Peoples. These agreements dictate that indigenous reserves are exclusive to indigenous people, and cannot be expropriated for any reason. In the case of an attempt to dispossess the Maleku of their land, the UN mandates that the government should respond in their defense.

However, the government’s failure to properly demarcate Indigenous reserve territory and execute this legislation has allowed outsiders to outnumber the Maleku on their own land. Now, sixty-two percent of residents of the Maleku reserve are non-Maleku.

“The government knew what was happening and never did anything,” says Alcides.

Local authorities turned a blind eye to the dispossession while it occurred. Yet even years later, the government has failed to rectify this violation. Former Costa Rican President Óscar Arias pledged to help recuperate the Maleku’s lost lands during his campaign in 1985, but never followed through.

Says Elizondo Castro, “Now we are fed up and decided to reclaim our territory, our ancestral heritage.”

The Meaning of the Land

To the Maleku, the territory signifies more than a few patches of dirt and trees; rather, the land symbolizes their bond with nature.

The original Maleku territory extends far beyond the borders defined by the government when the reserve was established in 1976. In the pre-Columbian era, the Maleku spread throughout the valley of the Río Frío, and in the region between the Guanacaste mountain range and the volcanic sierra along the Pacific coast – an area of just under 2,500 square miles. Even after retreating from Spanish colonists, the Maleku enjoyed farming, fishing, hunting, and collecting valuable rainforest products from an area of 400 square miles. However, their reserve comprises only around 11.5 square miles, of which, less than the two square miles rest in Maleku hands.

The loss of land has caused many Maleku to leave the community to work in the local city of Guatuso as day laborers, or relocate entirely. Around ten percent of Maleku people are unemployed, the highest rate of any Indigenous community in Costa Rica. In such a small area, hunting and farming – the traditional methods of subsistence – are practically impossible, and any alternatives require leaving the reserve. For these reasons, the reclamation of reserve territory portends enormous changes.

If the occupation succeeds, Elizondo Castro predicts that “the animals will return: mammals, amphibians, reptiles, birds, insects.” In a society that cherishes nature and all rainforest-dwellers, such a reversion would be monumental. On top of this, recovering the lands in question would return precious water sources to the Maleku. While this reclamation promises greater self-sufficiency for the Maleku community, these water sources also possess spiritual significance. According to Maleku religion, the gods granted the Maleku people a territory rich with rivers and lagoons to ease their fishing and farming efforts. Regaining access to these rivers could revitalize Maleku ties to their Creator and Provider.

Yet, in the humble and generous spirit of his tribe, Alcides thinks not only of the future of the Maleku, but also of the entire global community.

“Indigenous land means oxygen,” he says, and he believes that the Maleku’s reforestation efforts would increase the world’s supply of this vital substance.

Still, leading a social movement is challenging, and it is for this reason that the Maleku have waited to accumulate support and resources before taking radical action.

“It is difficult to organize a group of people and have enough food, supplies, and basic necessities to support them. Not many people were keen on fighting for what we have classified as a struggle of the rightful indigenous people against the economic power of the rich.”

In order for the movement to succeed, the Maleku need material support to sustain the protesters on the ground, and the union of international networks to advocate their cause.

“People can help us with donations or money to buy food, clothing, supplies and other items necessary for survival because this is a long process,” says Elizondo Castro.

On top of this, supporters can share the news of the occupation and petition international organizations such as the United Nations Permanent Forum on Indigenous Issues to intervene on behalf of the Maleku.

“We need support and for the people to understand that there are laws that say that Indigenous territories are exclusive to Indigenous people.”

With the united efforts of international supporters, a struggle that has persisted for decades may reach a peaceful conclusion. Then maybe next year, as Alcides welcomes interested tourists and eager volunteers like me to the reserve, he can share the stories that shape the Maleku imagination against a backdrop of true landscape in which they were born.

-- Jessica Minor, a proud friend and ally of the Maleku, is currently studying International Studies and Spanish at Washington University in St. Louis. Alcides Elizondo Castro can be reached at alcindigena7@hotmail.com