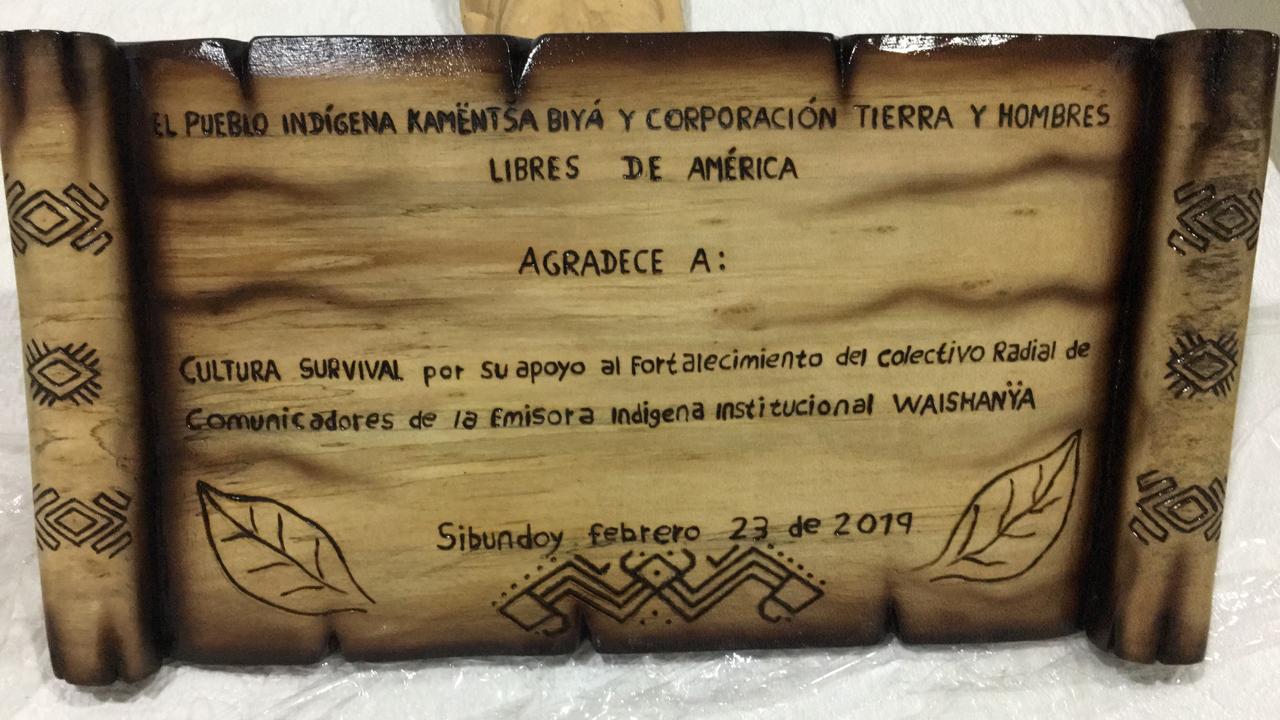 Radio Waishanÿa, operated by the Kamëntša Biyá Nation in Putumayo, Colombia, is a 2018 Cultural Survival Community Media grant partner. Radio Waishanÿa is training a team of volunteers, creating a station board of directors, and training radio producers to also be community investigative journalists, and building technical capacity of station staff to maintain and operate radio equipment.

Sibundoy Valley in Colombia is a region inhabited by two peoples, Inga and Kamëntša, as well as others who have been migrating since 1535 to this ancestral territory. Indigenous Peoples have come here to communicate with our Tsbatsanamama (Mother Earth), because she possesses us, feeds us, protects us and guides us. It is to her that we belong and to her we have to return.

We are the "umbilical cord" between Mother Earth, man, and space. This relationship should never be disturbed, because it would cause a great imbalance and have a lethal outcome.

When we, Kamëntša people, speak with the spirits of the ancestors, we live in every moment of the past and with them we build the future. We communicate in silence with our brothers, the trees, the animals, the wind, the mountains, with fire and with water. With external incursion, outside cultures have chipped away at parts of our lifeways. The ancient voices are still alive in us, encouraging us, but not with the voices of silence, but with courage to bring our voices to other peoples to tell them what we have been living though.

Indigenous Peoples have not forgotten our communication instruments such as: the shout, the sound of the horn, smoke, dreams, the flutter of hummingbirds, and other natural communicators. Radio is as a strategy and a communication tool because through radio our ancestors breathe. Radio carries messages through the air waves to the listener.

Colombia is a multiethnic country where more than 102 Indigenous Peoples with a population of 1,800,000 people live, speaking more than 64 languages ​​other than Spanish. Indigenous organizations have played an important role in fighting for their territories, environmental conservation, recognition of their traditional knowledge, and advocate for legal frameworks to access to the media. Radio has played an important role because it is a means to cultivate and transmit traditions, languages, music, wisdom and histories to the younger generation. It connects distant communities together.

Through Law 1341 (2009) and Resolution 415 (2010) of the Ministry for Information Technology and Communication (MINTIC), Indigenous communities can access radio frequencies for social, educational, and cultural purposes and obtain licenses as a public interest radio. Public interest radio stations do not receive state support and are not permitted to charge for air time, which limits the stations’ sustainability. Stations need to pay 5 million to 10 million Colombian pesos ($1622 -$3245 USD) a year for usufruct of the broadcasting license.

In partnership with the Universidad del Valle, the Pontifical Bolivarian University, the Missionary Institute of Anthropology-IMA, Renacer Organization, we organized a dialogue on what community radio is, what it is for, and how we can create peace using community radio.

It is my duty to express the immeasurable recognition of Cultural Survival for its support in the strengthening Indigenous community radio.

As radio broadcasters and community journalists, we have a great responsibility, to be in harmony with ourselves and to apply the principle of truth to bring the voice of humble peoples, to make visible the other Colombia that has been hidden through the war, and represent the interests of the community. Community radio stations distance themselves from the commercial and public service media. Community radio stations not only look for listeners as advertisers or as audiences that must be informed, but also consider them as citizens and as participants in the information making. It gives community members the opportunity to become active producers of information and opinion and at the same they can communicate their visions of the world and their demands.