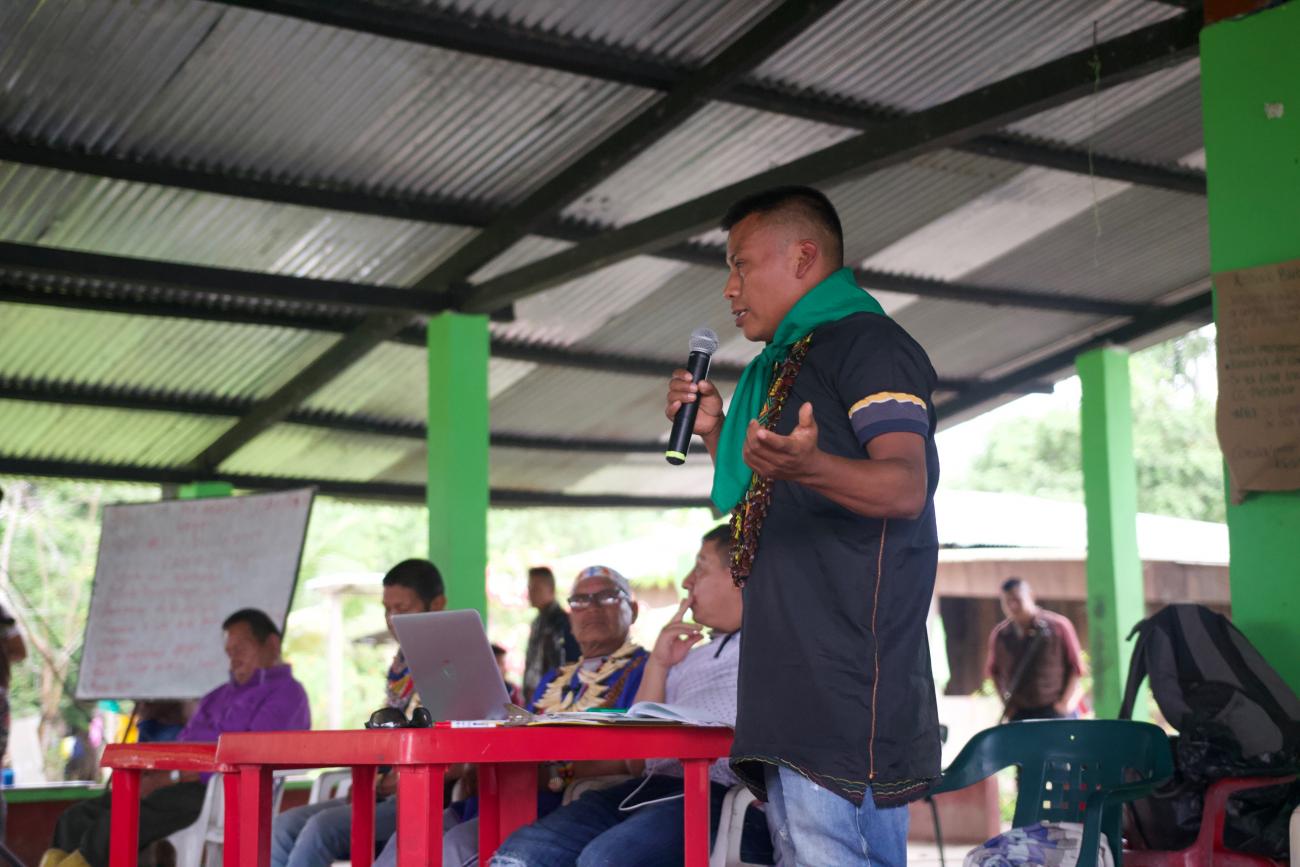 "People without Mother Nature can no longer live."

The Union of Yagé Doctors of the Colombian Amazon is a group of spiritual authorities from Inga, Siona, Cofán, Kamentsá, and Coreguaje Peoples. The communities represented in UMIYAC inhabit the southwestern region of the Colombian Amazon 22 resguardos, or legally recognized Indigenous territories, and numerous trails and villages located in ancestral lands in the Departments of Putumayo, Caquetá, and Cauca.

Cultural Survival, through the Keepers of the Earth Fund, collaborated with UMIYAC on a project entitled ”Celebration of Thought and Dialogue with Spiritual Authorities for Strengthening and Defending of Territory, Autonomy, Culture and Life.” Five of the communities within the project have been determined by the Colombian government  to be at risk of “physical and cultural extermination.”

The Minga de Pensamiento (Gathering in Celebration of Thought) was held on January 19-21, 2019 in the community of Gonzaya, Buenavista, in Putumayo, Siona territory on the banks of the Putumayo River. The reason the Minga was hosted here was to provide support and solidarity to the Siona border communities of Ecuador and Colombia, given the increase in threats and harassment by armed forces which pose a high risk of displacement to the community.

"Our knowledge is key to face climate change and take care of the planet and the future of humanity," stated one community leader. Some 85 spiritual authorities and women participated, accompanied by their families, including several youth. Two yagé spiritual ceremonies were held, one on the side of the Putumayo River in Ecuador and one on the Colombian side. Yagé is a medicinal plant used for spiritual ceremony in the Inga tradition as well as other Indigenous communities of the Amazon. The guided ceremonial use of the plant is used by the Yagé Doctors for the purposes of healing the post-traumatic stress that is widespread among rural communities in Colombia as they have been in the crossfires of a decades long armed conflict between the FARC and Colombian Military, and continue to face violence, dispossession of their land, and contamination of their forests resulting from mining and oil extraction. "Traditional medicine is not just about curing the body, it is about territory, autonomy, food sovereignty, and environmental conservation,” said one participant.

On the third day, the spiritual authorities of the five towns met to talk and think collectively about the organization, the accountability of the projects developed, and planning future work. An evaluation was carried out where weaknesses were identified in the organizational and communication processes, mainly in women’s participation and they are currently developing a strategy to improve women’s access to leadership positions.

"This minga, or community gathering, and the Yagé, rebuild what was damaged because of the armed conflict,” commented one leader. For UMIYAC, the Minga was an important achievement to advance organizational processes for Indigenous Peoples to strengthen their cultures, defend, protect and conserve Mother Nature, based on Indigenous wisdom and traditional medicine. "In previous years there were discussions and disagreements, this time we finally had a true Minga of dialogue," commented one participant. It was a moment to demonstrate to the armed groups, the government, and the extractive companies that threaten their communities and their territories that their peoples are united. "It shows the unity of the organization, in unity we will achieve our objectives," stated one leader. Another declared, "For the first time since the UMIYAC  was created, we feel fortified."

The revitalization of cultural practices and Indigenous traditional medicine is guaranteed by the constitution of the Republic of Colombia and by international conventions such as the ILO 169  and the United Nations Declaration on the Rights of Indigenous Peoples.