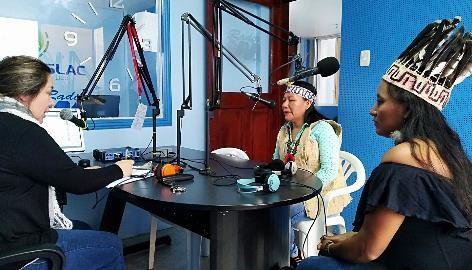 "I am not scared. As a Zápara woman, I will fight for my territory."  -- Nema Grefa Ushigua, president of the Zápara Nation, after receiving threats in April.

The Zápara (or Sápara) Nation is crosses both sides of the border between Ecuador and Peru. In Ecuador, the federation is made up of representatives of 23 communities and serves as the highest authority and decision making body regarding issues related to the Nation and its communities.

The Zápara Nation’s land has been threatened by oil companies Petroamazonas EP and Andes Petroleum (SINOPEC-SNPC Consortium) trying to extract their resources. Backed by the Ecuadorian government, the two oil companies obtained concessions affecting the territories of Achuar, Shuar, Shiwiar, Waorani, Andoa, Zápara, Kichwa and the Kichwa Village of Sarayaku. The communities have claimed and exercised their right to Free, Prior and Informed Consent, guaranteed in Ecuador’s constitution and in the ruling of Sarayaku vs. Ecuador of 2012, by rejecting the extractive projects.  Recent oil concessions granted by the government of Ecuador cover 49 percent of the Zápara territory. Gloria Ushigua, president of the Sápara Women's Association of Ecuador, stated: "Half of the Amazon is already contaminated. In the province of Pastaza we defend our rights, because they are always consulting other people... who are not in my territory. We Sáparas are owners of our territory. We want you to consult us. We already have seen what happens to some Indigenous communities and how they have ended up. We do not want to end up that way, we want to live on our lands where we grew up, where I grew up. I'm not afraid, even if they kill me, even if they judge me, I'll be on the front lines."

With a project funded by Cultural Survival's Keepers of the Earth Fund, the Bi-National Federation of the Zápara People of Ecuador and Perú (FEBPZEP by it's Spanish acronym) has carried out activities to bring timely and detailed information to the Zápara communities on public policy projects and land defense strategies, since their right to Free, Prior and Informed consent has been violated, both by the previous national government of Ecuador and by the current one. The project sought to strengthen the capacity of local organizations and determine strategies for land protection. FEBPZEP organized assemblies across other Indigenous Nations affected by the concessions and hosted informational workshops with community members about how to document human rights violations or environmental impacts when they are witnessed. The project also included consultancy on communications strategies and strategic litigation before human rights bodies.

The KOEF grant helped to strengthen FEBPZEP’s Governing Council by organizing of the Third Congress of the Zápara Nation. The Congress was held on May 22-23, 2018, where representatives (akamenos) of 12 communities, official delegates, and 4 new base communities attended. After analyzing the problems related to the ongoing violation of their rights,  the attending communities made the decision to form a new Government Council, electing Nema Grefa as its president, and several new representatives.