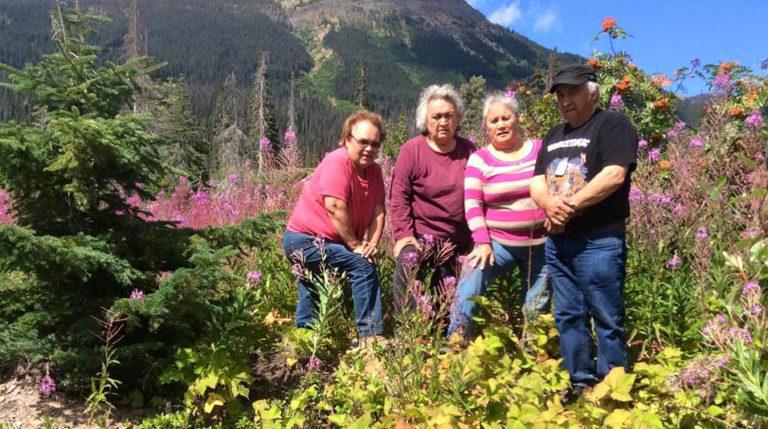 Since ancient times and continuing today, in canoe journeys and community resistance building gatherings, there are protocols where visiting Peoples ask permission from Traditional Chiefs and Matriarchs before entering the another Peoples’ territory. This is a living, breathing assertion of the traditional laws of the Wet’suwet’en Peoples. This is not new. Traditional laws like the Free, Prior and Informed Consent (FPIC) Protocol have been practiced by the Wet’suwet’en for thousands of years.

The Unist’ot’en Camp was founded in 2010 by Wet’suwet’en hereditary Chiefs. Its mission is to protect Unist’ot’en territory by re-establishing traditional Indigenous governance systems and enacting an FPIC protocol for all activities on Unist’ot’en land. Created by Wet’suwet’en chiefs, the Unist’ot’en Camp sits in the “energy corridor” for pipelines in Canada and is under threat from oil spills and devastating destruction of the environment. As a clan of the larger Wet’suwet’en Nation, the Unist’ot’en are represented by chiefs Knedlebaes, Weli’, Lht'at'en, Maskaboo and Gohawk. These hereditary chiefs have requested that Freda Huson direct the day to day activities of the Unist’ot’en camp and act as spokesperson for the Unist’ot’en clan. Under this system, traditional Wet’suwet’en knowledge about the land is used to govern the types of activities that can take place on their territory. As a sovereign Nation impacted by colonization, they are also subject to the Western laws and decision-making systems being imposed on them by the Canadian government.

Huson, Unist’ot’en hereditary spokesperson, manages the camp and administers the Tribe’s FPIC protocol, negotiating with corporations about what type of industrial activity will take place on Unist’ot’en land. “Our people’s belief is that we are part of the land. The land is not separate from us. The land sustains us. And if we don’t take care of her, she won’t be able to sustain us, and we as a generation of people will die,” Huson states.

The Keepers of the Earth Fund is helping the Wet’suwet’en to implement the "Living Out Our Protocols Project" in four camps to gather and strategize the best way to protect their lands and build solidarity between communities. They are promoting traditional skills like trapping, growing food, hunting, and organizing for the youth. This traditional Indigenous matriarchal governance maintains the survival of the land and the people and benefits countless people and communities worldwide. The Unist’ot’en camp has re-established traditional laws and decision-making systems for all their land and resources.