KOEF Grant Partner Spotlight: Association for the Survival of the Cultural Heritage of the Nyindu Indigenous Peoples 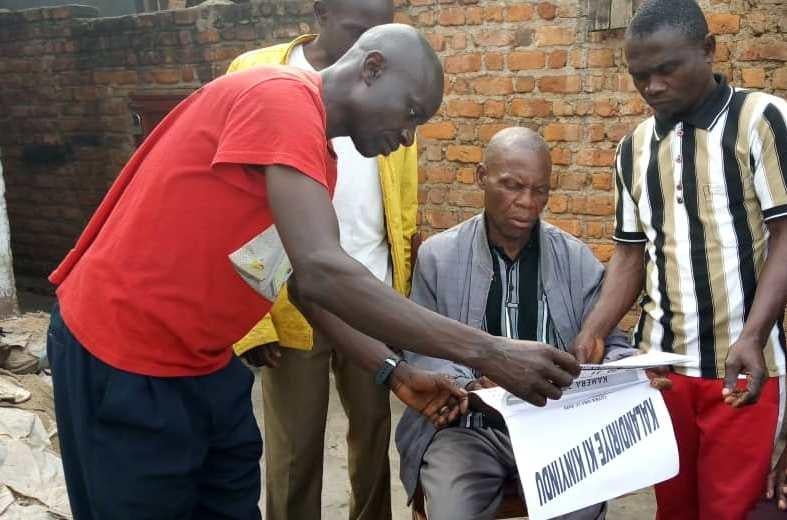 Association for the Survival of the Cultural Heritage of the Nyindu Indigenous Peoples (ASPHAN), Democratic Republic of Congo

The Batwa Nyindu of the Mwenga territory in South Kivu fear that dominant languages are steadily phasing out the Kinyindu language, and with it the Nyindu identity. Kinyindu is an endangered language of the Batwa Nyindu Peoples living in the Lwindi rural district, in the Mwenga territory in South Kivu, an eastern Province of the DRC. L’Association pour la Survie de l’Héritage Culturel du Peuple Autochtone (ASHPAN) obtained a KOEF grant to create a pioneer phrasal and idioms dictionary in Kinyindu, as well as a calendar to demonstrate the Kinyindu system of time telling. The use of the dictionary sparked interest in Nyindu culture, and has been promoting cultural revitalization and inclusion.

“We issued the pioneer Kinyindu Phrasal Dictionary and also a Kinyindu Calendar. These documents are intended to serve our Banyindu community so as to reinforce our identity image and contribute to revitalizing our traditional culture values,” stated ASHPAN.

More than 4000 headwords, comprising idioms are provided with exemplary phrases in the dictionary. “This constitutes a historic achievement in our Banyindu Peoples’ cultural history. As a result, the outcome contributes significantly to excluding the possibility that our Kinyindu language will vanish, as many neighboring non-Indigenous community members were predicting, and some wishing. We are so proud of this achievement. The project has mostly served as a powerful catalyst for community efforts to document and promote our Kinyindu language,” ASHPAN commented.

“The objective of this project was to promote our Nyindu ancestral wisdom contained in proverbs. Thanks to the grant received from KOEF, our team has worked on promoting our traditional knowledge contained in our proverbs by translating these proverbs first in Kiswahili and then in French. In order to do so, we first gathered with remnant literate Nyindu and Kinyindu speakers to discuss the procedures to be followed in working on the translations. Given that some of these remnant Nyindu speakers do not speak or understand French, we worked first on the Kiswahili translation. We then worked on the French translation from both the solely Kinyindu version of the proverbs which had been produced before the current project started, and by referring to the bilingual Kinyindu-Kiswahili version. We first made electronic versions available, and after some revision and editing, the printed versions of the bilingual Banyindu Proverbs Book in Kinyindu and Kiswahili, and the bilingual Banyindu Indigenous Proverbs Book in Kinyindu and French were published. Finally, the books were introduced to our community members and copies were also distributed to eight schools operating in our Lwindi territory.”

Another achievement thanks to this project was collecting and gathering informational data from Banyindu community members in the Luindi community and to have the information documented for use. Thousands of words and phrases, including idioms, were collected. “At the community level, we enjoy seeing that given that the phrases were provided in real Banyindu life environment. The collected phrases conveyed, not imaginary scenes related phrases but sayings relaying our daily Banyindu life. The phrasal dictionary is like our community’s oral history, which is not only enjoyable but also a cultural historical conservation tool for us. This activity brought forth to concerted agreement on meanings of words and expressions. This has opened room to learn from one another and also to enrich our knowledge of the meaning of idioms and words. Every family in our Tribe is used to certain expressions, so, sharing other words and expressions proved to be enriching.”

“Thanks to the Kinyindu Pioneer Phrasal Dictionary Project, we feel more energized in revitalizing our language. We firmly hope that the impact of the issued documents will be long lasting and will impact this generation.” ASHPAN will also partner with local radio to promote the organization’s mission and Nyindu culture throughout the region.

Country
Democractic Republic of the Congo
Issues
Languages and Cultures