Khoi and San People Protest at the Johannesburg Stock Exchange 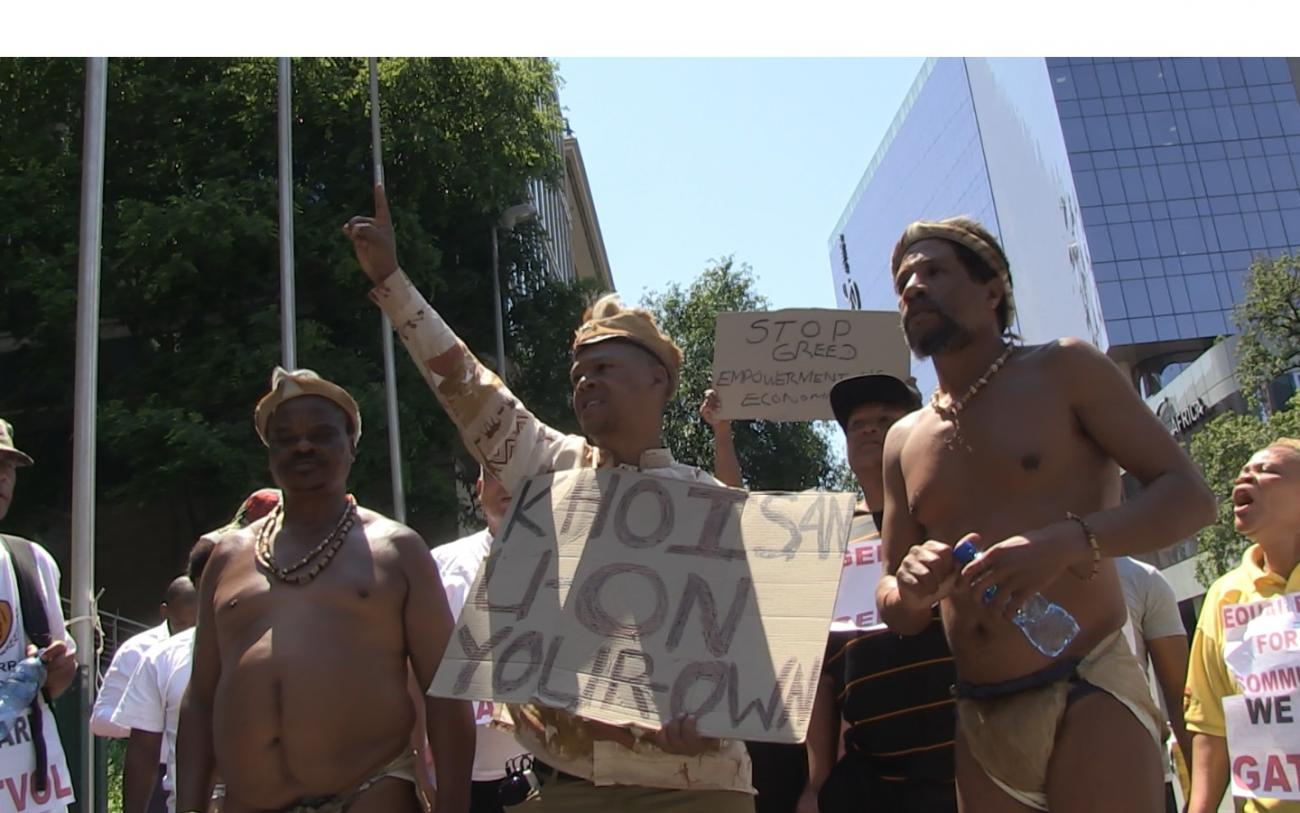 The Johannesburg Stock Exchange in South Africa was the scene of protest action organized by Khoi and San people on October 9, 2018. Echoes of the struggle song, “What have we done”, which is reminiscent of the anti-apartheid movement in South Africa, could be heard in Maude Street Sandton, where the Stock Exchange is situated, the richest square mile in Africa.  The spokesperson for the group, Anthony Williams, who is also the leader of Indigenous First Nation Advocacy of South Africa (IFNASA) handed a memorandum to a representative of the Johannesburg Stock Exchange (JSE). The memorandum noted that the JSE is symbolic of the economy of Johannesburg, and also the economy of the country.

South Africa's Indigenous citizens include the San peoples—!Xun, Khwe, and Khomani—the Nama Communities, the Griqua associations and Koranna descendants, and the “revivalist Khoisan,” which we refer to collectively as the Khoisan, making up about one percent of the country’s total population of 50 million. During the apartheid regime, Indigenous identification and culture were discouraged, when not actually banned, and many Khoisan people were forced to learn Afrikaans as their primary language. In 1996, the post-apartheid South African government took steps toward recognizing Khoisan rights. Article 6 of the constitution contains references to Indigenous languages, and Article 12 creates an active role for traditional leadership within the nation’s legal system. Khoisan ability to exercise two these rights is restricted by the country's continued use of the out-dated designations of Black, White, and Colored. Indigenous Peoples are not formally recognized in terms of national legislation as a customary community. This is slowly shifting with the pending Traditional and Khoisan Leadership Bill 2015, but it is unclear when this Bill will be passed. South Africa has voted in favor of adopting the UN Declaration on the Rights of Indigenous Peoples but has yet to ratify ILO Convention No. 169.

The memorandum presented on October 9 stated the grievances of Khoi and San peoples of Johannesburg which can be summarised as follows:

The peaceful march attracted the attention of many major media houses in South Africa, as well as that of nearby employees and passers-by.  Khoi and San activists have previously embarked on similar peaceful initiatives, the most memorable perhaps being in December 2017, where they waited for the President of South Africa on the lawn of the Union Buildings, in order for the Khoi and San communities to be recognized as First Nation citizens, an action for which they are still advocating.