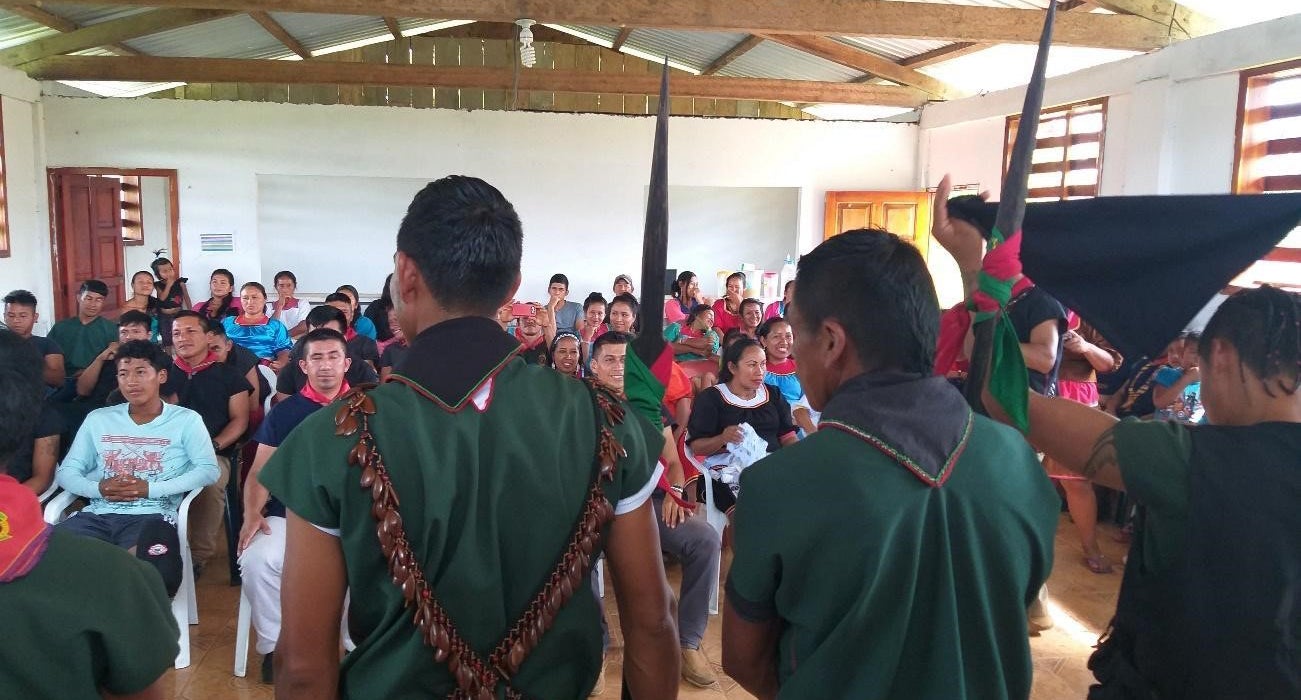 The Goldman Environmental Prize, colloquially called the ‘Green Nobel,’ is an annual prize granted to grassroots environmental champions from regions around the world. Not only does the prize entail international recognition and a monetary award for the activists' achievements, but it also provides them with access to long-term grants, networking and professional development, security support, strategic communications, and opportunities to participate in youth programs.

Cultural Survival’s Keepers of the Earth Fund (KOEF) Grant partners Alexandra Narvaez (A’i Cofán, 30) and Alex Lucitante (A’i Cofán, 29) won the 2022 Goldman Environmental Prize for their outstanding grassroots defense of the A’i Cofán Peoples’ ancestral territory in the Amazon rainforest of northern Ecuador. Their work alongside with their community to defend their territory from illegal mining operations successfully lead to legal decisions upholding the A’i Cofán Peoples’ rights to self-determination and eventually influenced the country’s Constitutional Court to rule for the first time that Ecuador’s Indigenous communities must not only be consulted on, but also their Free, Prior and Informed Consent must be obtained prior to extractive projects in their territories. As Narvaez stated “this is not a recognition to Alex or Alexandra, it is a recognition to all the A’i Cofan people of Sinangoe for their work and effort.”

The A’i Cofán community of Sinangoe is located on the banks of the Augarico River, a tributary of the Amazon in the Ecuadorian rainforest. Their ancestral territories make up 15,000 square miles of mostly virgin rainforest and one of the most carbon-dense regions of the Amazon. The Cofán Peoples’ culture and way of life are deeply connected to the river and the forest, which are integral to their subsistence as fishers and hunters. But their tradition and sovereignty were threatened in recent years when the A’i Cofán Peoples noticed increasingly extractive encroachment on their territory by illegal miners, loggers, poachers and fishermen.

In 2017, Alexandra Narvaez formed La Guardia, a community forest patrol group, to monitor and attempt to halt the illegal extraction taking place on their lands and waters without their consultation or any form of communication with the community. Upon La Guardia’s formation, the group created their own law permitting them to confiscate equipment and report trespassers to Ecuador’s environmental police. As La Guardia patrolled, they increasingly noticed mining encampments along the riverbanks within their territory. 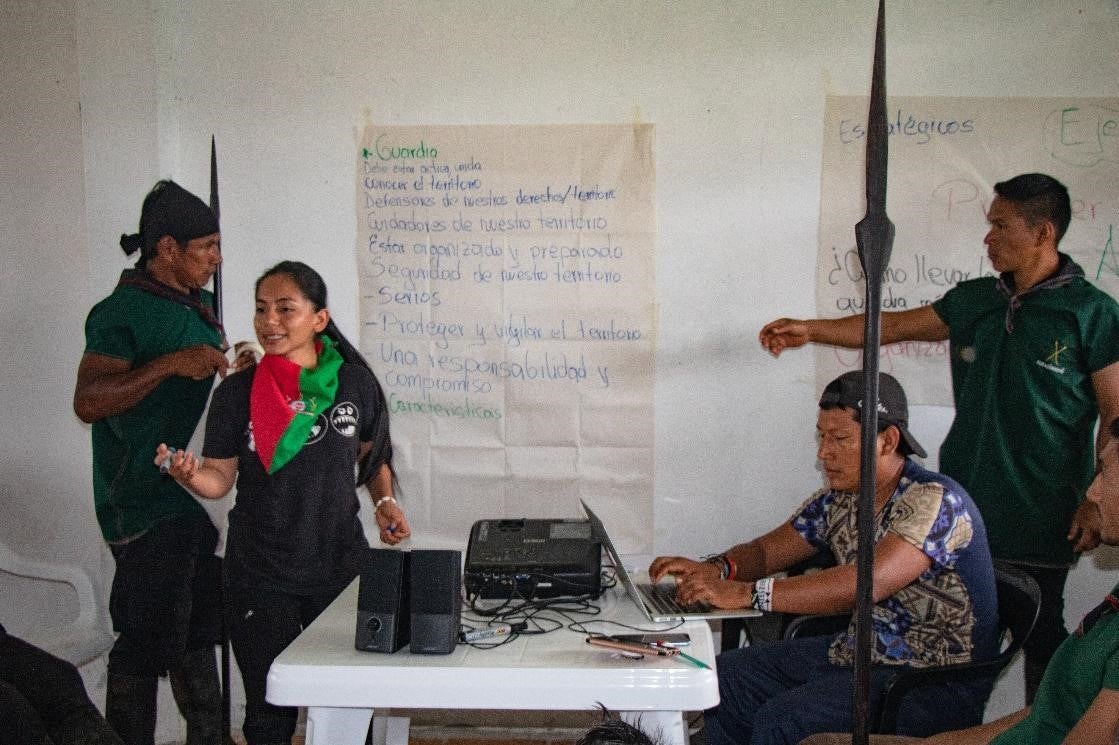 In January of 2018, they discovered heavy machinery designed to excavate at large scales. They learned that the Ecuadorian government had illegally granted 20 large-scale mining concessions, with 32 more pending, without the necessary consultation or communication with the community as required by Ecuadorian law, and without consent as deemed a right under international law.

Alex Lucitante and Alexandra Navaez sprung into action and organized the A’i Cofán community into developing strategies for amplifying their monitoring, patrolling, and reporting efforts. Leading their community into collective action, Alexandra organized the patrols and acted as the spokesperson for Sinangoe, while Alex spearheaded legal and media strategies, coordinated legal trainings, and networked with various entities and organizations, eventually bringing 60 national and international organizations and 14 local communities into their campaign.

The A’i Cofán’s patrolling efforts were amplified as they utilized camera traps to document legal incursions, GIS tools to map threats to their land, and drones to document illegal activities from above. With adequate evidence, legal preparation, and support from key partners like the nonprofit Amazon Frontlines, the community filed a lawsuit in July of 2018 against Ecuador’s Ministry of Environment, the Ministry of Energy and Non-Renewable Natural Resources, the Mining Regulation and Control Agency and the Water Agency for violations of the right of Indigenous Peoples to prior consent as declared under international law; the right to a healthy environment; the right to water, food, health and life; and the rights of nature as dictated under Ecuadorian constitutional law.

The judge ruled in favor of the A’i Cofán, nullifying the 52 concessions, but the government then appealed. The community continued to network, organize, and garner support for their campaign, and in September of 2018, the Provincial Tribunal Court of Sucumbíos also ruled in favor of the Cofán, permanently halting all granted and pending concessions and declaring that the government must consult with the Cofán before any new mining project is slated in or near their territory. The ruling upheld pre-existing Indigenous rights to consultation and freed 79,000 acres of Amazon rainforest from the threat of illegal gold mining. 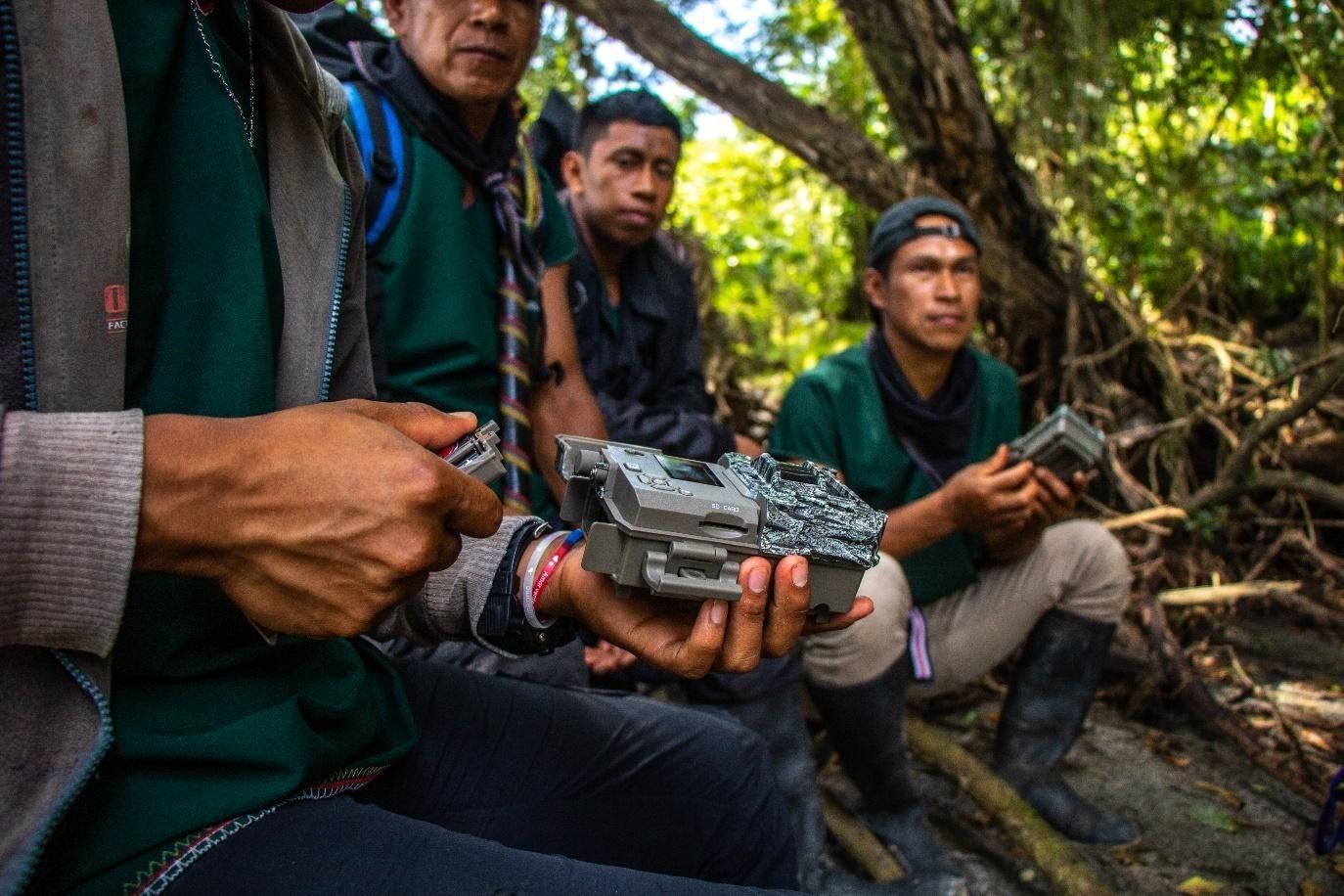 In 2019, Cultural Survival partnered with the Sinangoe community through a Keepers of the Earth Fund grant, which provided resources that amplified La Guardia’s efforts to patrol and enforce their sovereignty over their territory. The grant supported them in obtaining new drone technology and holding a multi-day training with other Amazonian communities on how to use the technology to identify and defend their territories from illegal mining operations. The grant also enabled them to obtain a motor for a canoe, amplifying the patrol of their territories along the Aguarico River.

The 2018 legal victory for the Sinangoe community set a precedent for future cases in Ecuador pertaining to violations of collective rights, environmental damage caused by extractive industries, and violations of Indigenous rights to consultation. But the case went on to have an even bigger impact. It was chosen by the Ecuadorian constitutional court to develop a national case law on the systematic violation of Indigenous Peoples’ right to self-determination.

Taking the right to consultation further, in February 2022, the Constitutional Court ruled that Ecuador's Indigenous communities must have Free, Prior, and Informed Consent, on extractive projects that affect their territories. This unprecedented ruling is consistent with the UN Declaration on the Rights of Indigenous Peoples’ articles on FPIC and is applicable to all Indigenous Peoples in Ecuador. The legacy of the Sinangoe community’s case set a legal precedent that will amplify the rights of Indigenous Peoples fighting to protect their territories in the Ecuadorian Amazon, which account for around 70 percent of the rainforest.

Narvaez, Lucitante, and the A’i Cofán community at large are well deserving of the recognition and resources entailed with the Goldman Award, which will amplify their capacities to defend their ancestral territory from illegally operating extractive industries in the Ecuadorian Amazon and uphold their rights as Indigenous Peoples under both Ecuadorian and international law. The fight is not over for the A’i Cofán Peoples of Sinangoe and other Indigenous communities in Ecuador, as the country’s president, Guillermo Lasso, has stated plans to expand mining and oil production in the coming years. Narvaez and Lucitante hope that their legal victories will encourage other Indigenous communities to challenge the legality of extractive projects like gold mining in their territories.