Kankuamo House of Worship is Burned to the Ground in Sierra Nevada de Santa Marta, Colombia 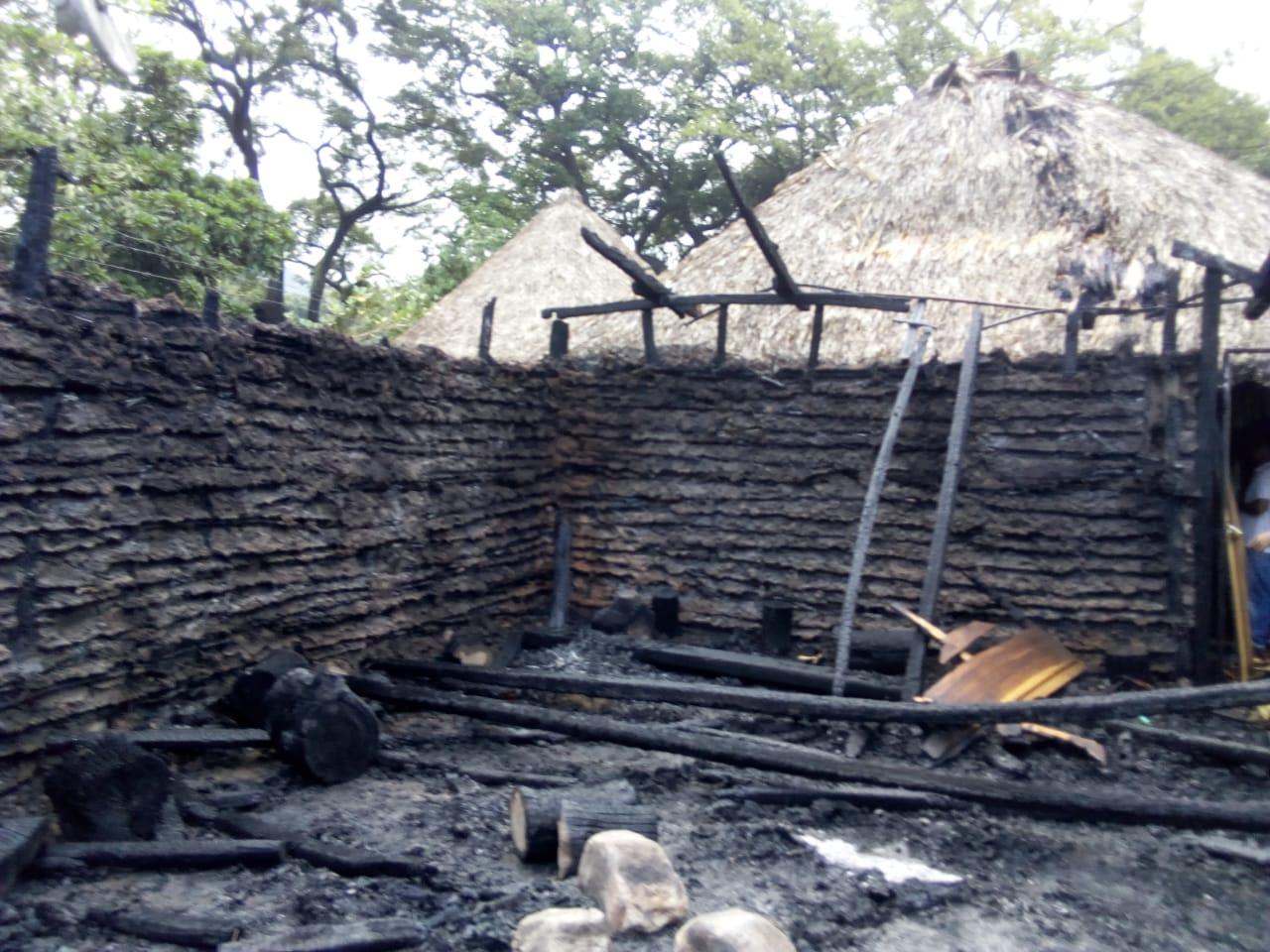 On October 19-20, 2018, Kankuamo Peoples Authority headed by the Mamos, General Elders Council, Town Council, leaders and members of the communities gathered in Makumake, Kankuamo Territory, Sierra Nevada de Santa Marta, Colombia, to release the following statement to the national and international public after the burning of a Kankurwa (ceremonial house) in Atanquez, in events that took place on the night of October 18, 2018:

The oral history that survives in our memory and territory says that the first Kankurwas of the Kankuamo people were burned down in the year of 1691, under the pretext that these houses were used to worship the devil and perform profane rites. From that moment began a series of systematic events with the purpose of exterminating our people through the destruction of symbols representative of identity and community building.

Our Kankurwas were left by the Father and Mother creators to build and strengthen the world, fulfilling the spiritual, material and community order; in them we talk and listen to the advice on how we should live, but above all this space is destined to transmit the ancestral knowledge for future generations.

Understood not only as constructions of wood, straw, stone and mud, the Kankurwas for us the indigenous people of the Sierra Nevada de Santa Marta are Mamos and Sagas who teach their children how to live and care for the world. For that reason when burning them a simple house is not burned, it is eliminated in the most violent way to a grandfather or grandmother whose only crime is to teach to live in harmony with nature and the universe.

Through many means and in different epochs of the colonial history of the country, people external to our town and territory managed to make us ashamed of our origin. Thanks to that shame imposed, many Kankuamos we weakened in the fulfillment of the mission and vision bequeathed from our origin. Other Kankuamos sought strategies to practice our traditions in a hidden way until the time came to return to the public to be Kankuamo. We returned to build our Kankurwas as places to be a community and to continue fulfilling the mandate to take care of life and sacred territory.

We are aware that by returning to our path of being Kankuamo we have affected many interests of those who saw and still see our communities as an electoral stronghold where with many empty words they made promises to gain our votes. Those external interests when displaced by our organization resumed old practices that were effective many years ago.

In the memory of many older people there is still the memory of people who came to our communities saying: "You are not Indians anymore, you are civilized and to be more civilized you have to change your roofed houses with straw and mud for zinc and cement " These expressions were penetrating in the mind of our people and in many communities of our shelter where a life of distress begins. Today, we are facing the fourth attack on our ceremonial houses; the first one is presented in the kankurwa of Chemesquemena, the second in La Mina, then those of Guatapurí and now the kankurwa of Atánquez.

Thinking about these facts, although we do not rule out that the hands that have burned down our ceremonial houses are of people living in our communities, however we are sure that behind such actions are actors with obscure economic and political interests who are still determined to erase us as an Indigenous Peoples and stop our organizational process and cultural strengthening, to take over our lands, continue to loot and exploit our territory and resources, without anyone obstructing them. For them we have a powerful message: we will look for them until we find them, and we warn them that Mother Nature, sooner or later, in their persons and in their families, will serve justice for the offense.

As authorities, we call on our people to support the reconstruction of Atánquez's Kankurwa, as well as reconstructing those of Chemesquemena, Guatapurí and La Mina. To the people and institutions that have expressed their solidarity we thank them and tell them that as children of the Sierra Nevada de Gonavindwa here we will continue, fulfilling the responsibility entrusted and reconstructing again and again what is necessary to continue being what we are: INDIGENAS KANKUAMOS: A Temple Town and strengthening the fence to contribute to the defense and protection of the heart of the World.

Finally, we demand an immediate institutional response to these events, therefore, we request the National Government and the Control Bodies to hold a high-level meeting, in the shortest time possible and in coordination with us, to define actions that will allow us to advance in the investigation and punishment of those responsible for these criminal acts and in the adoption of protection measures and effective guarantees of our rights.

The burning of the Kankurwa house occurred during the night when members of the community meet in La Mina to discuss the establishment of a community security council. Sadly, this is not the first of such incidents, in the past years there have been burnings of Kankurwa houses in three other communities (Chemsquemena, Guatapurí and La Mina) which all sit between the mountains of the Sierra Nevada de Santa Marta in the northern part of Colombia near the Caribbean coast.

The Sierra Nevada de Santa Marta is one of the biodiverse areas of Colombia with its thunderous mountains layered with pristine forests and over 160 billion years of granite formation. The abundance of wealth in the land makes it a target for mega project development. Historically, the Kankuamo people are still recovering from a 20-year civil war that occurred during the late 1980’s to 2003, were over 450 Kankuamos were murdered, over 300 children became fatherless, and more than 400 families were violently displaced.

In the late 1980’s after the establishment of the reservation there was negligence from the Colombian state which made the community vulnerable to an invasion and illegal occupation from armed paramilitary groups and left wing guerrillas seeking control over their territory, which perpetrated the narcotic trades in the area, and contributed to a civil war dispute over land. The Kankuamo people were severely impacted by the conflict, facing displacement, assassinations, massacres, forced disappearances, terror, and forced military recruitment. Many of their sacred sites were lost and huge part of the ecosystem was destroyed. This fragmented their traditional practices, ancestral knowledge, and oral histories. Face with the decline of their culture, the Kankuamo Indigenous Organization was established in 1993 in Atánquez. For over 25 years, youth have been raised under the guidance and knowledge of the Kankuamo Organization to revitalize their culture. This has caused many tensions and indifference within the community from those who seek cultural reconnection and those who seek extermination.

“The Kankurwa is the backbone for Indigenous people  as it is a space not only of ceremony and communication but a universal opening to connect with the creator. A ceremonial epicenter where the contact of the divine with the matter or physical body represents each of those that congregate and gives shape to the cultural structure of our people’s vision with the strength of the Mother Earth that transcends the history of humanity. Consequently, we conceive its destruction as a culturecide against humanity, not only against a group of people but against the spirituality of our people,”  said Souldes Enrique Maestre Montero (Kankuama), co-founder of the first public library in Atánquez.

The construction of Kankurwa homes has been one of the stepping stones in revitalizing their culture. Radio has also been an invaluable tool, an asset in producing, recording, and informing communities members about land rights, environmental protection, Indigenous rights, and cultural retention. The first ever community radio station went on air in 2006. It was given the name Tayrona Stereo in honor of the Kogi people who reside near the Tayrona National Park and are one of the last remaining descendants of the Inca and Aztec. Nixon Aria Martínez, co-founder of Tayrona Stereo, expressed great concern: “It is not that they just burnt a regular house, they burnt a whole thought that is embodied by justice, peace, harmony. They burnt it all”

The gravity of this vicious act has greatly despaired local youth as well those who found the Kankurwa as a place of common ground, where they experienced many profound moments of unlocking stories of their ancestors. It was a place of remembering. The construction of a Kankurwa was a way of engaging the youth in the community. The first one was built in Guatapuri, then in Chemesquemena, following La Mina and then Atánquez. Days after the arson the Youth Commission of Atánquez gathered and collectively released a statement:

“Today, we feel pain to see the burned walls of our Kakurwa because it was a space where again and again we found our being of Kankuamo. We will not  despair and will continue to rebuild. Today, we burned our grandfathers, tomorrow we will heal them by rebuilding them. And why will we rebuild them? Because we were born with them and they are part of us and we are of it. We thank our parents for giving us back the spirit of being Kankuamos. We will do what is necessary to preserve it with pride and greatness.”