Jeffrey Gibson at the Whitney Biennial Hearing and reading about this year's Whitney Biennial's diversity demographics that includes about forty percent artists of color and women, I had to see for myself if the hype was real. The Whitney Biennial is promoted as “charting the latest developments in American art.” This year's seventy-five artists live across the United States and in Puerto Rico and range in age from twenty-seven to eighty-three. The Whitney Biennial, the longest running survey of United States contemporary art, is displayed at the Whitney Museum of American Art in New York City, and involves gallery exhibits, performances, panel discussions, and film screenings.

One of the first 2019 Whitney Biennial art works to catch viewers’ eyes is Jeffrey Gibson’s Keep on Moving mixed-media wall hanging/banner that hangs right behind the lobby level ticket registration table. Gibson is a Choctaw-Cherokee painter and sculptor. Constructed of canvas, cotton, acrylic felt, repurposed quilt, nylon and cotton thread, glass beads, and Velcro, the neon bright banner has bold, potent, thematic phrases that are political, life affirming, and up lifting such as, She Protects the Land; He Imagines a Future; and Their Spirits are Present, all in block capital letters. A predominantly white square quilt in the upper left corner has stitched cursive lettering that states, “Thank you for the space. Know you are loved. Keep on moving. Don't stop.” This piece helps the line to move faster and is a definite conversation piece.

Jeffrey Gibson (Mississippi Band of Choctaw Indians and Cherokee) was born in 1972 in Colorado Springs, Colorado, and currently lives in Germantown, New York. Growing up Gibson moved around a lot, including abroad in England, Korea, and Germany due to his fathers’ military career. Gibson received his 1998 MFA from the Royal College of Art, sponsored by the Mississippi Band of Choctaw Indians. Unlike many of the other Biennial artists, Gibson chose not to include much biographical information on his wall texts. Respecting the artist’s preference, I will focus mainly on his art works.

Biennial art objects are displayed throughout the museum with most on the fifth and sixth floors. Gibson's other three mixed-media hanging banners/sculptures are prominently displayed upstairs in a central location that can't be missed. People Like Us is made with canvas, cotton, linen, brass grommets, nylon and cotton thread, ribbon, glass stone, plastic beads, nylon fringe, tin jingles, wooden tipi poles, and deer hide. 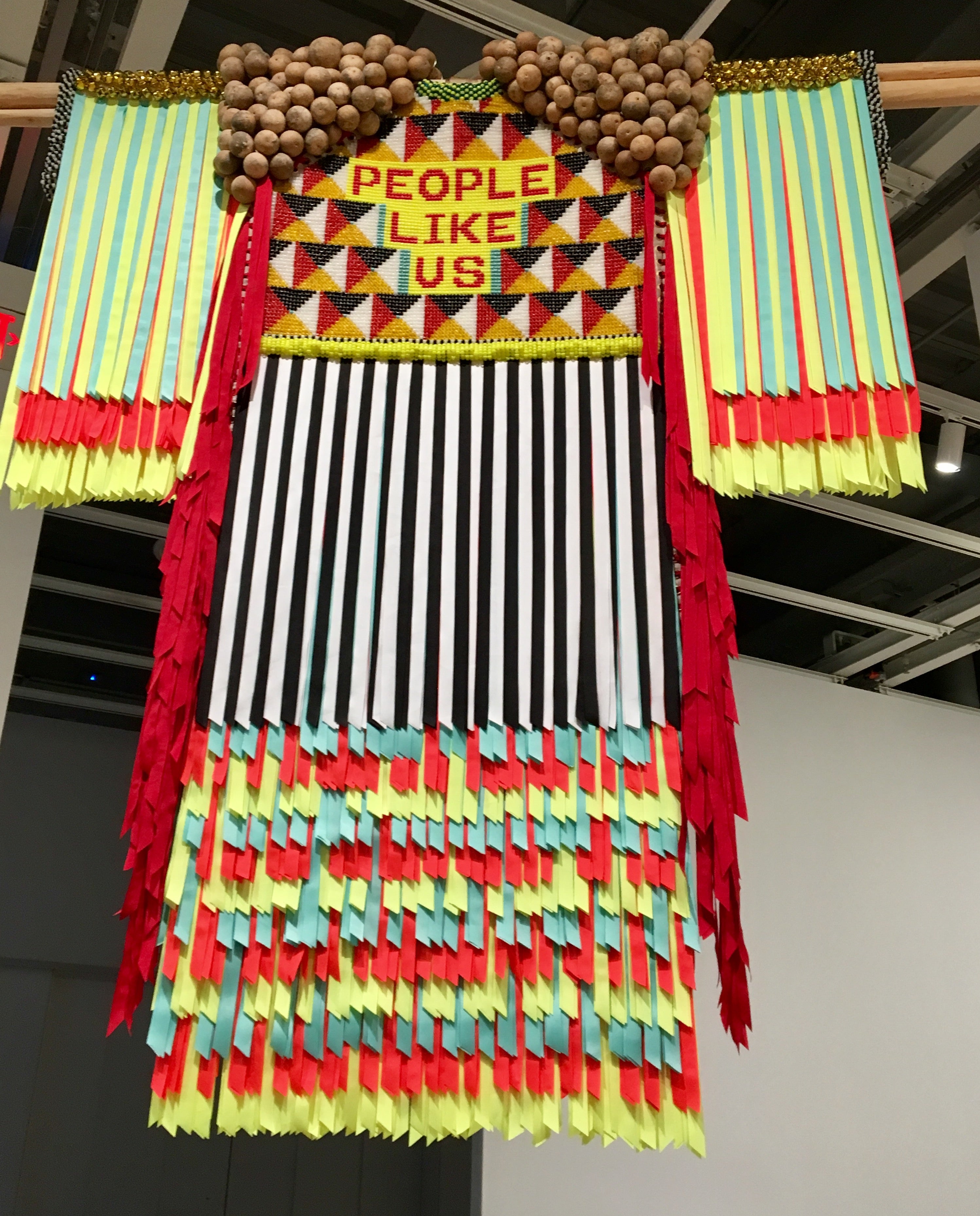 The title, People Like Us, reminds me of the contradictions associated with non-Indigenous people claiming a false Native identity, the fashion industry appropriating Native regalia, real estate planners and developers naming residential streets after Native American Tribes that never even lived in the area, and sports teams with racist mascots, all claiming they are “honoring us” and are showing their appreciation.

The museum wall text describes Gibson’s works as “sculptures that refer to garments associated with the Ghost Dance movement.” This banned movement began in the late 1800’s by the Nevada Paiute and quickly spread to other Tribes who participated in the group dancing, believing that this peaceful and spiritual resistance would discourage future white settlement, encourage the current settlers to leave or disappear, and protect Indians from the physical harm of guns and other weapons. The subtle movement of the sculpture’s cloth while hanging from the ceiling is a reminder of how Native American regalia worn by Ghost Dance participants swayed with the wind and the dancers’ body movements. This modern version of Ghost Dance attire has rainbow coloring that the wall text refers to as “queer club culture,” another insight into Jeffrey Gibson’s identity. 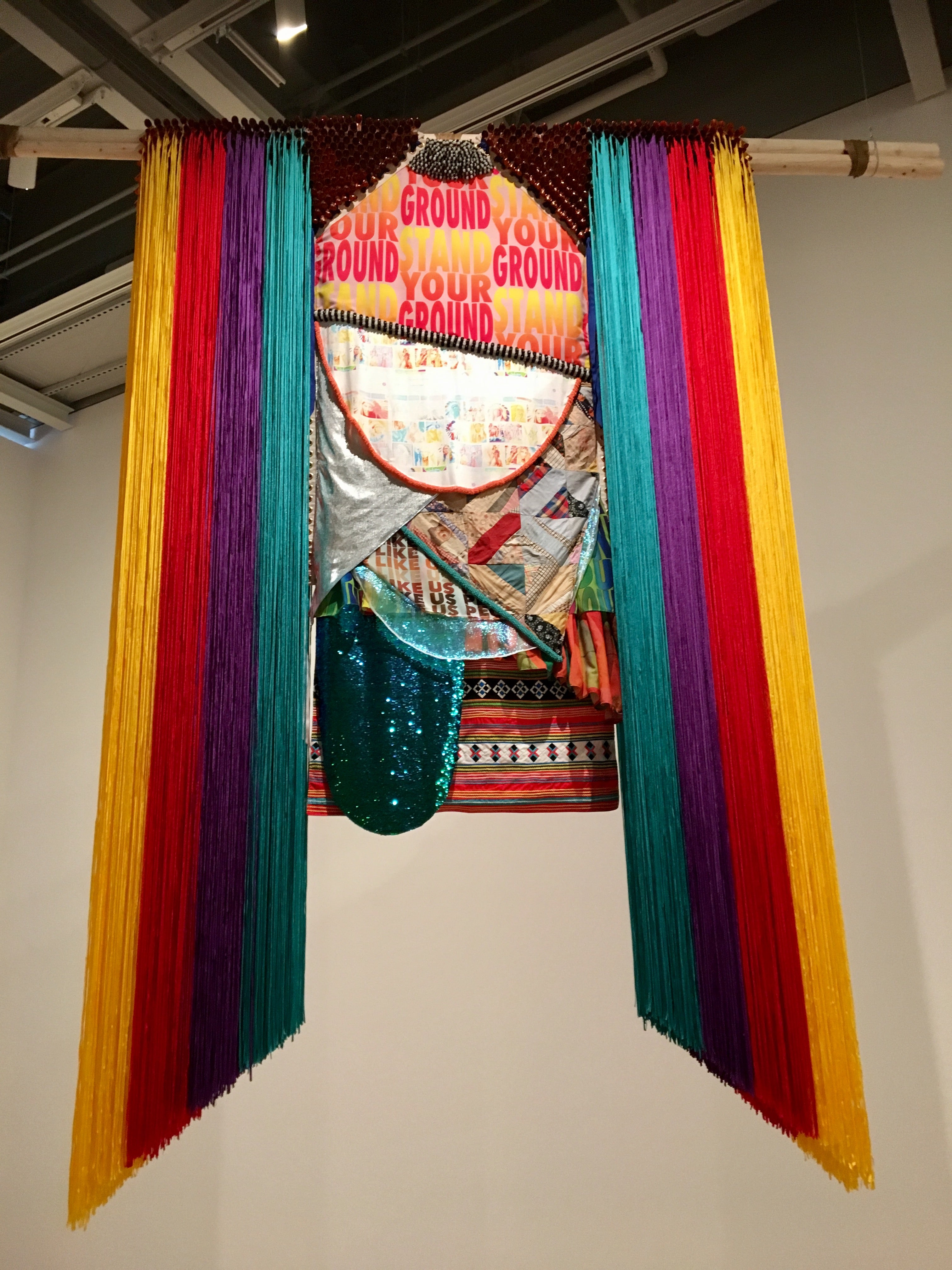 His Stand Your Ground piece consists of two hanging sculptures made from materials similar to the other works. Most American viewers are familiar with the phrase, “stand your ground” as the Florida policy that allows residents to shoot and kill anyone that makes them feel threatened, exemplified in the case of unarmed Black teenager Treyvon Martin who was shot to death by George Zimmerman, a “threatened” white man. Gibson’s layered work incorporates patchwork quilted squares and triangles with the repetitive text, “Tribes File Suit to Protect Bears Ears.” Bears Ears U.S. National Monument located in San Juan County, Utah was established by President Obama via presidential proclamation in December 2016. The nature formed monument is co-managed by a coalition of five Tribes with ancestral ties to the land. The monument’s land area was reduced by 85 percent by Trump in December 2017. The inclusion of the Bears Ears reference is another display of Gibson’s work as at times confrontational and political but also aesthetically pleasing to the eye, mixing past and present Native realities, while also envisioning future possibilities for Indigenity. 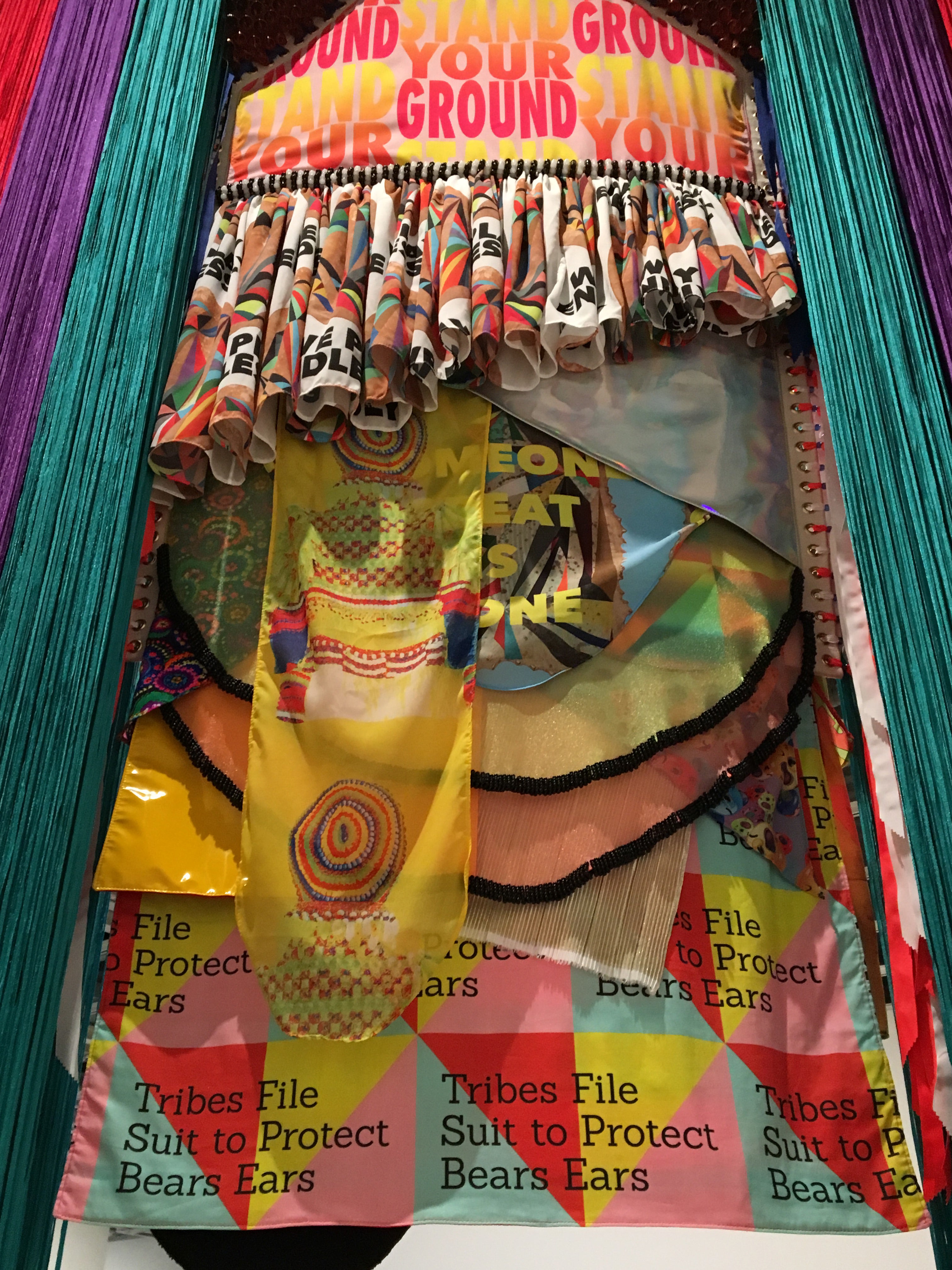 Stand Your Ground. 2019. ZoomI strongly urge our Cultural Survival readers to view Gibson’s work in person as well as the many other politically engaged works on display by other artists of color in this year's Whitney Biennial. On Friday, September 20, 2019, at 7:00pm and Saturday, September 21, 2019, at 4:00pm Native artist James Luna (Luiseno-Ipi-Mexican American) who passed in March 2018 will be featured in the Biennial Film Program in a film, What Was Always Yours and Never Lost, made by the Colectivo Los Ingravidos. Check it out!

All photos by Phoebe Farris.