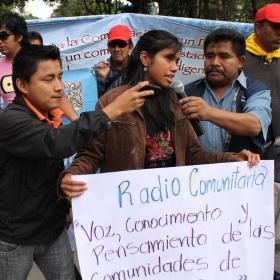 Cambridge, MA (March 14, 2013) - On March 15, in Washington D.C., the Inter-American Commission on Human Rights (IACHR) will hold a hearing during its 147th Period of Sessions concerning the freedom of expression of Indigenous Peoples in Guatemala. The hearing will address the status of community radio in Guatemala, which despite being guaranteed to Indigenous Peoples by the UN Declaration on the Rights of Indigenous Peoples, the 1996 Peace Accords, and the Guatemalan Constitution, is not legal under the country's current telecommunications law. Cultural Survival's Cesar Gomez along with Alma Temaj, Salvador Quiacain, and Leopoldo Zeissig will represent the Guatemalan community radio movement. The hearing will be transmitted live to community radio stations in Guatemala.

For over a decade, Indigenous radio advocates have been lobbying the Guatemalan Congress to legalize community radio. For seven years, Cultural Survival, an Indigenous Peoples rights organization based in Cambridge, MA, has partnered with a network of over 80 community radio stations across Guatemala, many of which broadcast in one or more of the country's 23 Indigenous languages, in building the stations' capacity and supporting their legalization efforts. The proposed Community Media Bill, Initiative 4087, which would create legal authorizations for nonprofit community radio by allowing Indigenous Peoples equal access to the radio spectrum, has been awaiting congressional approval since 2010.

The community radio movement in Guatemala is racing against the clock. Another piece of proposed legislation, Initiative 4479, proposed in July 2012, would criminalize the use of the radio spectrum for any actors not authorized to do so. The bill aims to take community radio stations that are fighting for legal recognition off the air. It would sanction the imprisonment of individual actors and representatives of radio stations that do not have legal authority to broadcast with a penalty of up to ten years in prison. Both Bill 4479 and Bill 4087 have been recommended favorably by committees in the Guatemalan Congress, but so far neither have been scheduled on the congressional agenda.

In October 2011, Cultural Survival's sister organization in Guatemala, Sobrevivencia Cultural, submitted an action of unconstitutionality to the Constitutional Court in Guatemala, declaring economic and ethnic discrimination in the state's mechanism for distribution of radio frequencies. The action argued that by auctioning off frequency licenses to the highest bidder, Indigenous communities, who historically and currently are among the most economically disadvantaged in the country, lack fair access to state-owned media.

In March 2012, the Constitutional Court of Guatemala ruled against the action, upholding the telecommunications law as is.  However, the court did recommend the congress legislate in favor of Indigenous People's access to radio. In response, Cultural Survival submitted a petition to the IACHR in September 2012  arguing that Guatemala is violating Indigenous Peoples' rights to freedom of expression, culture and media.  The petition has not yet been addressed by the IACHR.  However, if the IACHR rules in favor of the petition and Guatemala does not comply with its recommendations, they may decide to refer the case to the Inter-American Court on Human Rights..  Decisions of the Inter-American Court are binding, meaning that the state of Guatemala would be required to change the law if the Court were to find that Guatemala is violating its obligations under American Convention on Human Rights.

The value community radio brings to Indigenous people is innumerable. In Guatemala, community radio is the best tool to provide rural, Indigenous Guatemalans with the news and information that they need. In many cases, community radio is the only medium that reaches people who are illiterate or do not speak Spanish. Community radio stations, which broadcast locally in Mayan languages and Spanish, provide a crucial venue for educational programs, local, national, and international news, and health and emergency information. They instill pride in a community's heritage and contribute to maintaining local languages strong and relevant. Special Rapporteur on the Rights of Indigenous Peoples, James Anaya, on World Radio Day 2012 said, "Radio has been a fundamental means for Indigenous Peoples to maintain their languages and to exercise and defend their rights."

The hearing on March 15 will bring the Guatemala community radio movement to the attention of the IACHR. Mark Camp, Deputy Executive Director of Cultural Survival, stated in reference to the hearing and its potential repercussions, "Our hope is that the government of Guatemala will finally choose to meet its obligations and respect the right of Indigenous communities to have their own media."