Indigenous Women and the Climate Crisis 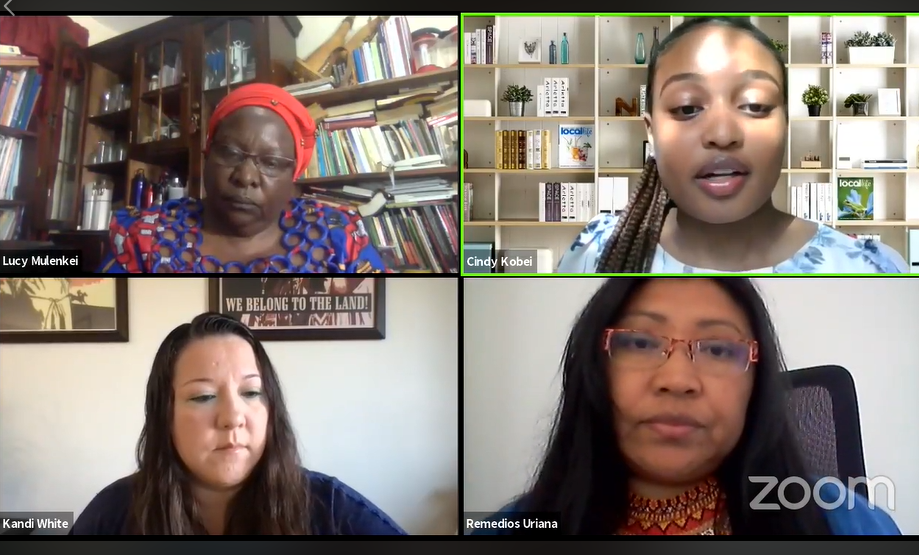 As Indigenous Peoples, we acknowledge that our identity is intrinsically connected to the land; our cultures and languages directly reflect our connection with the territories we inhabit. As whole ecosystems collapse due to climate change, our ways and means of living collapse as well. There is a climate crisis worldwide, and Indigenous Peoples bear the brunt of its consequences, especially Indigenous women.

As the former president of the UN General Assembly to the Indigenous Peoples’ Global Summit on Climate Change, H.E. Miguel D’escoto Brockmann said, “Climate change poses threats and dangers to the survival of Indigenous communities worldwide, even though they contribute the least to greenhouse emissions. In fact, Indigenous Peoples are vital to the many ecosystems in their lands and territories and help enhance the resilience of these ecosystems. In addition, Indigenous Peoples interpret and react to the impacts of climate change in creative ways, drawing on traditional knowledge and other technologies to find solutions that society at large can replicate to counter pending changes."

As part of the celebration of the twentieth session of the UN Permanent Forum on Indigenous Issues (UNPFII) which took part this year virtually on April 19-30, 2021, MADRE and the Rosa Luxemburg Foundation convened a conversation at a side session centered around building sustainable and peaceful communities. During this panel, Indigenous women from Africa, Asia, and the Americas came together to discuss issues like the intersection of environmental impacts and peacebuilding; lessons on the successes they have had in protecting their lands and territories;  the impacts of climate change and extractive industries in the lives of Indigenous women; and why women are at the center when building solidarity and sisterhood.

Lucy Mulenkei (Maasai), board member at Natural Justice, noted that climate change affects Indigenous communities through natural disasters and depleted resources. She shared the experiences of her community where women have the heaviest workload; they look for water, wood and put food on the table. Men are also affected because they have to travel longer routes and leave their homes for extended periods to find pastures to feed their cattle. Remedios Uriana (Wayüü), member of (ONIC) Organización Nacional Indígena de Colombia,  added that Indigenous communities in Colombia face droughts, food insecurity, malnutrition, and sicknesses. Furthermore, Kandi White (Mandan, Hidatsa, Arikara), from Indigenous Rising, talked about the imbalances in our environment, much of it caused by the fossil fuel industry. She also called our attention to humanity’s loss of respect for the land and ourselves. White elaborated perfectly, “We have become economically dependent on our cultural destruction; we Indigenous women have a right not only to survive but to thrive.”

Although the future may seem uncertain, women at this conference felt encouraged by the rising up of women and youth who are organizing to fight back. There is a transition taking place away from fossil fuels, and more and more women are making their voices heard. But change has come very slowly; Indigenous Peoples fought for 25 years to have the UN Declaration on the Rights of Indigenous Peoples (UNDRIP). We need to act now and use every tool in our toolkit to make change happen faster. To quote Kandi White’s words, "We can't wait 25 years for a piece of paper to get passed while we are dying in our communities."

Otilia Lux de Coti (Maya K’iche’), Permanent Representative of Guatemala to UNESCO Executive Council, explained that the issues Indigenous women face have a political and jurisdictional angle; therefore, women’s organizations should unite their efforts around specific issues to make their voices heard. She also made the following recommendations: strengthening the rule of law and building stronger institutions to defend Indigenous territories; countries should create laws that recognize the territorial property of Indigenous communities; organizations should lead legal efforts to assert Indigenous Peoples’ rights over their territories, and promote land titling for women.

Women often confront corporate power when defending their territories from extractive industries, in addition to experiencing intimidation, harassment, and criminalization. Indigenous women face barriers in the decision-making processes, marginalization within their movements, and stigmatization. Women Human Rights Defenders experience violence perpetrated by corporations and private companies, government entities, military forces, but also within their communities and movements.  Human rights violations against Indigenous women are connected to the extractive model of development, which disrupts Indigenous women's livelihoods and their communities. There is a sense of urgency to support Indigenous self-determination where Indigenous communities decide the future of their territories, with a greater sense of respect to their spirituality and sacredness of the land.

Panelists also concluded that continuing to empower women to assert their rights and use the tools available to them is essential to fight against climate change and protect Indigenous territories. They called on governments to translate the UNDRIP into all Indigenous languages and voiced their concerns over the murder of human rights defenders. Women at this conference reminded all people that their support is important and encouraged them to reconnect to the land and remember who we are.

It is also crucial for governments and civil society to recognize that climate change has become a core national security threat for every nation globally. Conflict can erupt at any moment as communities fight for scarce resources. If we consider the pressure added to communities by extractive industries in our territories, it becomes a dangerously combustible mix of threats to Indigenous communities, especially to Indigenous women who often experience human rights violations. As Indigenous women experience environmental and social impacts due to climate change, societies become less safe for them. We have to reach out to every partner we can find to make the case to the whole world that caring for the environment advances peace, security, and the well being for everyone.

Cultural Survival stands in solidarity with Indigenous women everywhere. Women whose lives have been disrupted by the environmental and social impacts of climate change. Women who are defending their territories and their rights every day against powerful extractive corporations. Women whose experiences go unnoticed, whose voices go unheard. Wherever you are, and whatever the circumstances of your life, please know that you are not alone in this fight. At Cultural Survival, we are raising awareness through our different programs about the difficult circumstances you are facing. We urge governments and societies at large to wake up to these realities, we have to do much more, and we have to do it now.