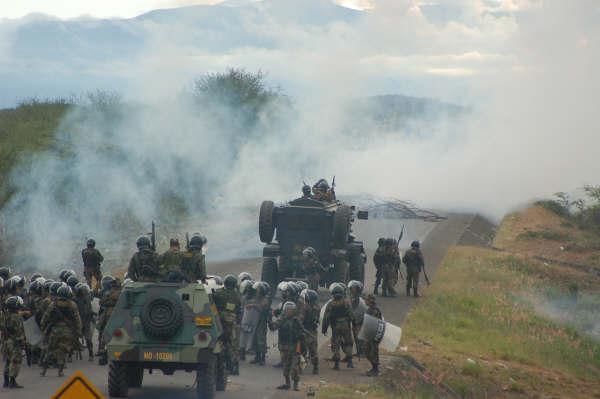 On the morning of October 19, 2016, a police vehicle rammed into a crowd of largely Indigenous protesters outside of the United States Embassy in Manila, the capital of the Philippines. Over 50 people were injured. After the violent disruption of the protest, the police proceeded to arrest approximately 31 protesters, which since have been released, as well as to use teargas to further disperse the crowd.

The protesters, which consisted of a coalition of Indigenous Peoples including Moro, Lumod and Ilongot, were objecting to the presence of the United States military in the country, particularly in Moro ancestral lands, as well as the strong economic ties between the two countries. Indigenous Peoples, and particularly Moro peoples, have resisted American militarization of Indigenous lands for a long time, especially as it introduces or exacerbates environmental degradation, displacement, and prostitution. The protesters specifically endorsed newly elected President Rodrigo Duterte’s foreign policy, which seeks to remove the dependency of the Philippines onto the American economy.

“I was ran over by a police van,” Indigenous protester Piya Macliing Malayao shares after the incident, “we were about to end our program and disperse our ranks. We were just waiting for the last speaker to end. But the police advanced, and one of their vans even drove back and forth. This is why I’m injured. And now that the medical team is about to provide me with first aid, the police are attempting to arrest them. They say that they are charging all of us! For what? For protecting the sovereignty of the Philippines?” In response to the violent incident, the police claimed that the vehicle was only trying to exit the growing crowd which was protesting without permit.

The violent response raised many questions among Philippine Indigenous groups and coalitions about the commitment of Duterte to new foreign policies and the different ways such policies would translate into increased sovereignty for Indigenous Peoples. Jerome Succor Aba, Suara Bangsamoro national spokesperson said “is this how the government treats its national minorities? Is this the answer to our plea to stand up for national sovereignty and protect the interests of national minorities from the claws of Washington?” Similar concerns were raised by other Indigenous protesters, especially as the incident came on the heels of a similar less violent response to an Indigenous rights protest in Quezon City. As President Duterte is still on a diplomatic visit to strengthen the relation of the Philippines with China, many are awaiting his return and anticipate how he will address this incident and the situation of Indigenous Peoples in general.