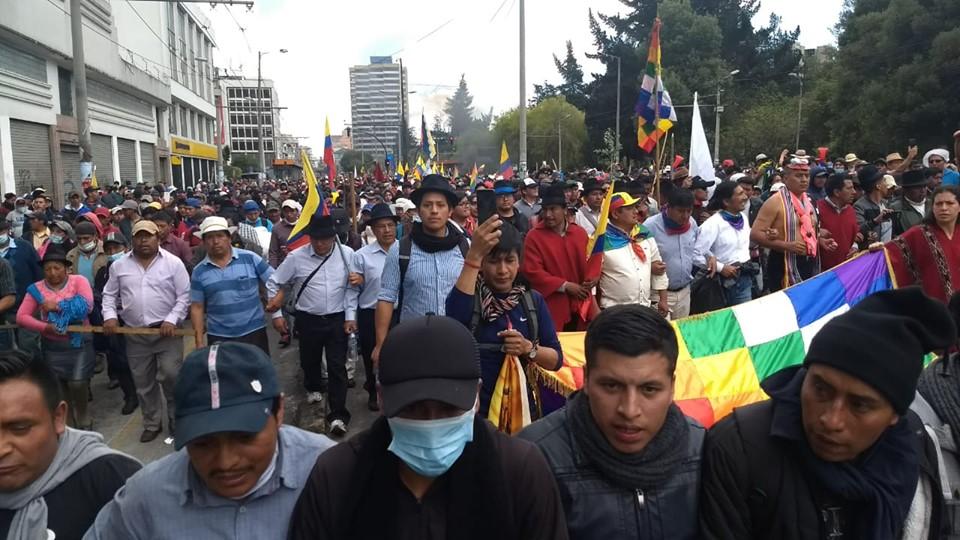 For eight days Indigenous Peoples have been in the streets of Ecuador leading protests against the neoliberal government of Lenin Moreno. While protests have been largely peaceful, protesters have clashed with riot police in the largest civic mobilization since 2005 as thousands call for repeal of austerity measures. President Moreno left Quito on Monday, October 7, moving his government to the port city of Guayaquil. Indigenous mobilizations have played a key role in bringing down previous Ecuadorian presidents including Abdalá Bucaram in 1997, Jamil Mahuad in 2000, and Lucio Gutiérrez in 2005.

Indigenous leaders say the strikes will not end until a decree eliminating fuel subsidies is repealed. The decree, announced on October 1 as part of a $4.2 billion loan deal with the International Monetary Fund, caused the price of gasoline to spike by a third and diesel to more than double. The hardest hit are Indigenous communities as it increases the costs of transporting their goods.

Thousands of Indigenous people camped outside of the parliament building in Quito and have been marching in the streets. Protesters have also blocked highways in the countryside, occupied government buildings, oil fields, water-treatment facilities and a hydroelectric plant. Indigenous organizations have stated that there will be no dialogue until austerity measures are repealed and the government stops selling concessions of their lands to oil and mining companies. Violent clashes have been reported in cities like Quito, Guayaquil, and Cuenca. Five people have died, many have been injured in clashes with security forces, and over 750 have been detained. There are reports that police brutality has also been directed at children and youth. Protesters have been marching and barricading roads with burning tires, while armored police vehicles have shot out water cannons and tear gas. There are calls for the international community to intervene to make sure human rights are respected and for humanitarian aid and legal support.

The Confederation of Indigenous Nationalities of Ecuador (CONAIE) and the Confederation of Indigenous Nationalities of the Ecuadorian Amazon (CONFENIAE) have mobilised over 6,000 members to Quito from outlying areas and said that the Moreno administration is acting like a "military dictatorship" by declaring a state of emergency and setting a curfew. Indigenous Peoples are protesting also for the defense of their lands and their collective rights.

Juan Solano (Kichwa) of Instituto Quilloac, a Cultural Survival Keepers of the Earth grant partner, commented on the situation,

“The violation of Indigenous rights is strong. The national media has sold to the state and conceals what is happening. Our only means of communication are social media networks. Yesterday [October 9] night, the Ecuadorian state began to eliminate information from social networks. There have been about 20 Indigenous deaths, and hundreds of people arrested and missing. Children and sick people want  to return home but it's not possible. The police at night threw tear gas at the Salesian University and in the agora of the house of culture where children, women, and the elderly were resting from the protests. This is done in order to deplete the resources of survival and force Indigenous Peoples to surrender. The hospitals and the Red Cross have stopped serving Indigenous people. There are doctors providing voluntary services. Indigenous communities continue to fight through blockade of the roads and prohibition of sales of food produced in the countryside. People in the urban centers need to become aware of these needs caused by the position taken by the President. Many young Indigenous people from the southern part of Ecuador last night traveled to Quito to support our Indigenous brothers. Today, local organizations in the province of Cañar are generating a massive call to go out and put pressure on officials in the region. One of the possible solutions to avoid deaths and end this is for the members of the army to go against this regime and give support to the people from the communities. There are rumors that the army commanders already received bribes from businessmen so that they continue to carry out orders against the people.”

“We have been unemployed for almost a week, protesting to eliminate the economic measures that affect the poorest people in the country. These measures have affected the Indigenous people who are marching today and demanding that these measures  to be repealed and all this has led us to repression in violation of human rights. I, as a young person and as a woman, am very affected by the fact that the access roads are closed  and there is no supply of products. The government does not respect our rights and threaten Indigenous Peoples with no pity. We are in a difficult situation but fight to make the president step towards our demands.”

“The Moreno government wants to force us to accept these economic measures but will forgive high amount of debts of bankers and large companies. The people themselves cannot assume all the costs and they want to lower our salaries. This is why people resist.

We are in a state of emergency, in curfew whoever goes out can be killed with high caliber weapons. We are fighting, many folks in Quito have entered the Assembly where they got hit with tear gas...The national media are told not to cover what we say. Xenophobic people who call us 'Indios', tell us to return to our land to sow, and say if we arrive in Quito we will make it dirty...There are already many dead and wounded, homeless children, women, old people.

They are violating our rights to express ourselves, to live in a quiet place and more than anything else we have the right to protest because we disagree. There are people who have little and these measures cause more poverty. They call us exaggerated, because we want this government to respect our rights, while the President asks the military to shoot us so that there is stability in the country.”