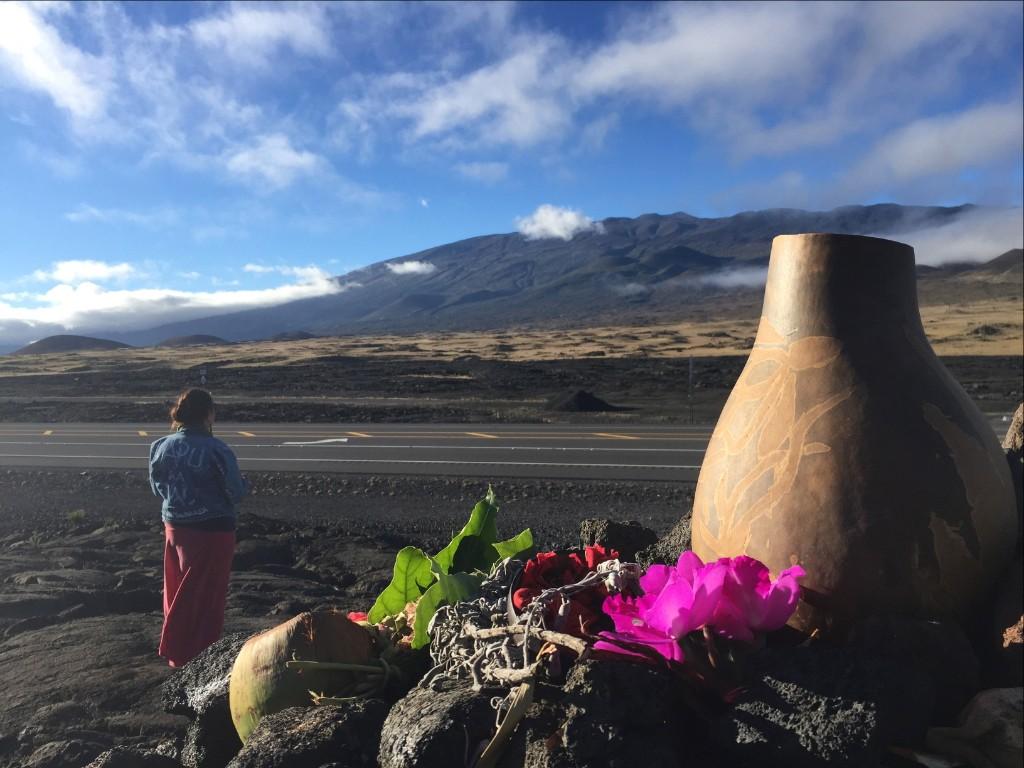 Towering above the landscape of the island of Hawai'i is the breathtaking Mauna Kea. With a perpetual blanket of snow crowning its peak this mountain rises 13,796 ft (4,205 m) above sea level achieving the title of tallest mountain in the Pacific.

Below the surface of the ocean, however, Mauna Kea stretches downward for another 19,700 ft making its total height approximately 35,000 ft (10,210 m) and earning it the honor of being the world’s tallest mountain (even defeating Mount Everest).

What many people may not realize is that the summit of Mauna Kea, with its glistening crown of snow, is also a wao akua, the realm of the gods.

Many Kanaka Maoli (Indigenous Peoples of Hawai’i or Native Hawaiians) believe that Mauna Kea, also referred to as Maunakea and Mauna a Wākea (Mountain of the Sky Father), is a sacred structure that functions as a piko (umbilical cord) connecting the Creator to the people of Hawai’i. Mauna Kea is the meeting place of Wākea (Sky Father) and Papahānaumoku (Earth Mother) and thus serves as the convergence point of heaven and earth.

It is this mountain, home to gods, goddesses, and deities, sacred waters, shrines, and burial sights, that Native Hawaiians seek to protect and preserve. They honor Mauna Kea as a temple and natural wonder of such spiritual significance that the mountain is reverently intertwined into their culture, history, religion, and personal livelihood.

As of October 30, 2018, Mauna Kea is officially the development site for the TMT International Observatory Corporation’s Thirty Meter Telescope. Expected to stand 180 ft (54.9m) high with a diameter of 98 ft (30m) the Thirty Meter Telescope (TMT) has spurred heated contention from Native Hawaiians who believe the creation of the telescope encroaches on the vitality of the mountain, violates their land rights, will initiate environmental degradation, and severely dismisses Mauna Kea’s cultural and religious significance.

The TMT International Observatory Corporation was first established in 2003 and  finished the Designment Development Phase for the construction of the telescope by 2009, the same year that Mauna Kea was selected to host the new telescope. In 2013 the Hawai‘i Board of Land and Natural Resources (BLNR) issued a Conservation District Use Permit (CDUP, or “permit”) signaling approval for the TMT’s construction on Mauna Kea. This permit was granted without the approval from Native Hawaiians nor did it sufficiently consult them on the project’s components.

The desire to hold the BLNR responsible for its dismissal of Native Hawaiian cultural traditions and practices as well as showcase the BLNR’s failure to arrange a proper consultation with Native Hawaiians manifested in October 2014 when protestors interrupted a TMT groundbreaking ceremony on the mountain.

In April 2015, 31 demonstrators were arrested for engaging in peaceful protest against the construction. That same month University of California Professor Alexei Filippenko sent out an email across the astrophysics department petitioning support for the TMT. The email included a note from UC Santa Cruz Professor Sandra Faber claiming “the Thirty-Meter Telescope is in trouble, attacked by a horde of native Hawaiians who are lying about the impact of the project on the mountain and who are threatening the safety of TMT personnel.” This false and accusatory statement highlighted nationally the racist undertones characterizing both policy decisions and personal sentiments surrounding the TMT project. Hundreds of scientists responded by issuing a statement condemning Faber’s racist rhetoric.

Tensions mounted further in June when 12 more protesters were arrested amidst peaceful demonstrations. Then on September 15, 2015, a Mauna Kea Support Services employee bulldozed an ahu (religious altar) to access rock and gravel for infrastructural purposes, prompting backlash and anguish from Native Hawaiians who felt the impact of having a sacred structure obliterated with no repercussions enacted on the perpetrator.

A combination of litigation, protest, and domestic and international media attention resulted in the Hawai’i Supreme Court’s nullification of the 2013 permit on December 2, 2015. Construction of the telescope, which had been impeded throughout the year by protests, legally came to a halt until a new hearing could be scheduled to evaluate the issuance of a new permit. The high court concluded “BLNR put the cart before the horse when it approved the permit before the contested case hearing.”

This victory was temporary, however, as October 30, 2018, marked the day that the Hawai’i Supreme Court voted 4-1 in favor of the TMT and permitted the reopening of the site on Mauna Kea for construction. In response to this ruling Scott Ishikawa, a spokesman for TMT told Hawai'i News Now “I think the lesson out of all this is Mauna Kea is everyone’s mountain. Everyone wants to keep it special I think and everyone has responsibility for taking care of it.”

But “everyone” does not revere Mauna Kea as a sacred cultural and religious sanctum as deeply as the Native Hawaiians nor can they fully understand how ingrained the spiritual beliefs and lifestyles of the Kanaka Maoli are in the mountain.

Makana Kushi a Ph.D. student at the University of Hawai’i at Mānoa who opposes the TMT project told WBUR in an interview after the October 2018 decision that “these astronomers, they like to connect what they are doing as Western scientists to ancient Polynesian voyaging. Our people used the stars to navigate and to find their way to Hawai'i. And I think it's a very surface-level connection. A lot of the knowledge that will come from the Thirty Meter Telescope is not knowledge that will be trickled down to working class Hawaiians, it's knowledge that will be in journal articles and help the careers of STEM Ph.D.s."

Furthermore, construction of the TMT risks environmental degradation from those who fail to responsibly care for the mountain following the onset of construction. The New York Times reported that “an environmental impact study performed by NASA in 2007 concluded that 30 years of astronomy had caused ‘significant, substantial and adverse’ harm to Mauna Kea.”

Justice Michael Wilson provided the sole opposition vote in the 4-1 outcome. Following the high court’s decision he wrote “under this new principle of natural resource law one of the most sacred resources of the Hawaiian culture loses its protection because it has previously undergone substantial adverse impact from prior development of telescopes.”

The Hawai’i Supreme Court’s decision also prompted Cultural Survival to assist a coalition of Native Hawaiian organizers to request Early Warning Measures and Urgent Action Procedures by submitting a  report  on March 22, 2019, to the United States of America’s 98th Session of the Committee on the Elimination of Racial Discrimination (CERD) detailing “the discrimination that Native Hawaiians have faced from the State of Hawai’i and the United States of America” as well as the “persistent violations of multiple provisions of the International Convention on the Elimination of All Forms of Racial Discrimination.” Cultural Survival calls for the United States to take immediate action to end this ongoing discrimination in compliance with the declarations established under CERD and the United Nations Declaration on the Rights of Indigenous Peoples (UNDRIP).

The Thirty Meter Telescope, once built, will be the fourteenth telescope erected on Mauna Kea. The report reveals “the Court held that the prior existing telescopes negated all claims that a new telescope would jeopardize or limit the ability of Native Hawaiians to engage in cultural and religious practices” and warns that “this dangerous precedent can potentially be used to argue for continued construction and development on any other traditional or sacred Hawaiian lands.”

By dismissing the claim that the TMT would prevent Native Hawaiians from participating in cultural and religious practices the Supreme Court “denied Native Hawaiians the ‘full and equal enjoyment of human rights and fundamental freedoms,’ in contravention of [CERD] Article 2(2), by questioning what practices were appropriate on the mountain” and failed to “follow through with the requirement that ‘special and concrete measures’ be enacted to ensure protection of certain racial groups.”

The notion that one telescope sets a precedent for the construction of more has been an ongoing phenomenon on Mauna Kea since the 1960s when the first telescope was established. Kealoha Pisciotta, the president of Mauna Kea Anaina Hou, a cultural organization opposed to the TMT, told Forbes “in the 1960s, it was believed that only one telescope was going to be built on Mauna Kea. But in the first few years, they ended up building four. That broke trust."

The Supreme Court has chosen to perpetuate a 50 year history that ignores racial discrimination and its duty under CERD Article 2(2) to consider social and cultural spheres of livelihood in cases that threaten “the full and equal enjoyment of human rights and fundamental freedoms.”

Additionally, the Hawaiian government holds Mauna Kea as public trust land that Native Hawaiians, under CERD Article 5 (d)(vi), have the right to inherit. Continual construction of telescopes on Mauna Kea “has resulted in that trust obligation being all but destroyed.”

The United Nations Declaration on the Rights of Indigenous Peoples (UNDRIP), an “authoritative synthesis of the contemporary view of Indigenous rights in international law,” established the mandate of Free, Prior and Informed Consent (FPIC) in 2007. FPIC dictates that Indigenous Peoples have the right to grant or deny the implementation of projects that affect both their livelihood and their land independent of manipulation or coercion. Cultural Survival’s report declares “FPIC is extremely relevant to Mauna Kea because the free, prior and informed consent to construct on traditional Native Hawaiian land was never asked for and never granted. This includes the TMT project as well as all earlier construction.”

Cultural Survival calls for the Committee on the Elimination of Racial Discrimination to issue directives aimed at halting future construction of the TMT as well as enforcing the protection of Native Hawaiian’s fundamental human and land rights established under CERD and UNDRIP.

In an interview with Indigenous Rights Radio, Antie Pua Case, a Native Hawaiian who grew up on Mauna Kea, explained the importance of the Native Hawaiian’s fight against the creation of the Thirty Meter Telescope. She revealed that the TMT will be built on “a mountain that can still shake. A mountain that still teaches and speaks to us. A mountain that we hold as a temple, as a sanctuary, as a sacred place. We stand because of that. We stand because don’t you think that at some point in time a native people and their supporters and their allies and their friends have the responsibility, the birthright, and the privilege to say no. Enough is enough. You have taken so much of what we already have that we are standing to say a’ole – no. And that is what we are doing here. And who are we? We are people. We are mothers and fathers. We are children and we are grandparents. And what Mauna Kea has done for us truly is unify us in the best way we can be unified.”