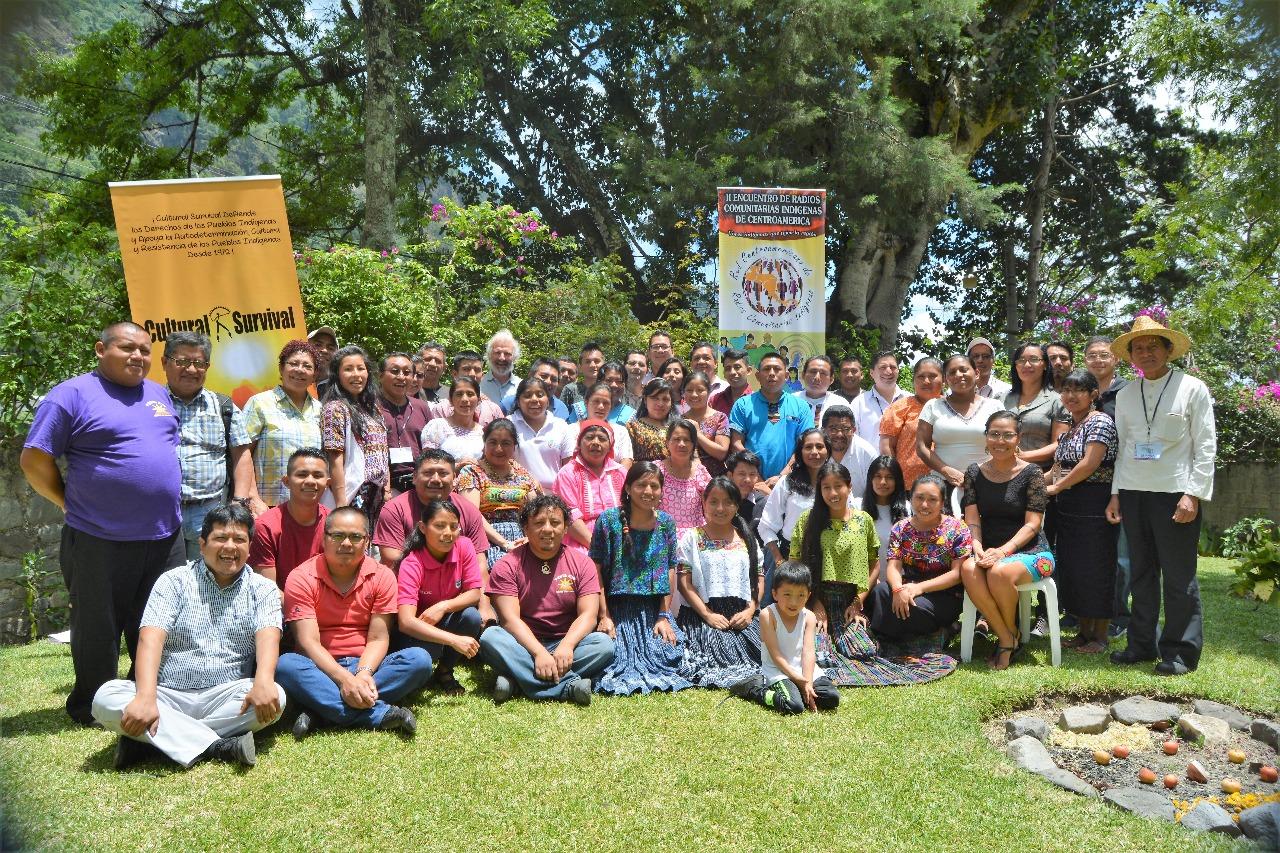 The Second Meeting of the Central American Indigenous Community Radio Network was held on August 8 and 9, 2018, in Panajachel, Guatemala, to commemorate the International Day of the World’s Indigenous Peoples. More than 60 representatives of community radio stations from Belize, Guatemala, El Salvador, Honduras, Nicaragua, Costa Rica, and Panama met to exchange experiences about the advances and setbacks of community radio broadcasting, the rights of Indigenous Peoples to freedom of expression and access to their own media, the criminalization and imprisonment of community journalists in their countries, as well as to review and approve a regional strategic plan for the network.

Democracy demands equality of civil and political rights for all citizens. UNESCO has stated that radio frequencies are a shared heritage of humanity and state governments are required to grant and administer them equally, without discrimination. However, this requirement has not been met in several countries in the Central American region. Indigenous Peoples continue to be excluded and discriminated against when accessing radio frequencies, denying them the right to freedom of expression.

“Information is power,” said Eva Tecún, attorney at Tz’ununija’ (humming bird) Indigenous Women's Movement in Guatemala, “Community radio stations have questioned colonialism and at the same time have strengthened the identities, cultures, and the languages of Indigenous Peoples. Community stations have put forward the need and right for Indigenous community communication as a tool for Indigenous Peoples’ development, where conventionally, communication was seen as a field where only professional journalists could participate.”

Indigenous Peoples in communities around the world have recognized the importance of locally owned and run media as being crucial for self-determination, as well as a key tool to strengthen the use of Indigenous languages and other elements of their cultures. Indigenous communities in at least 81 countries have invested their own local resources to establish and maintain community-run media outlets. Many of these communities have chosen radio as the medium that makes the most sense for them. However, several nation states do not have the appropriate laws and regulations to give legal authorization to Indigenous community radio stations.

Responding to the need for solidarity and cooperation between Indigenous communities across international borders, in January 2016, 35 representatives from all seven Central American countries for the first time gathered in Nargana, Panama, hosted by the autonomous government of Guna Yala, to lay the groundwork for a regional alliance of Indigenous community radio stations. Indigenous radio stations face similar challenges regardless of what nation state encompasses their traditional territories. The representatives of the participating radio stations, along with several accompanying NGOs, including Cultural Survival, Fundacion Comunicandanos, AMARC, Voces Indigenas de Panama, and Asociacion Sobrevivencia Cultural, created a strategic framework and set of goals for the network. The recent meeting in Panajachel is a significant step in the continued growth and consolidation of the network. 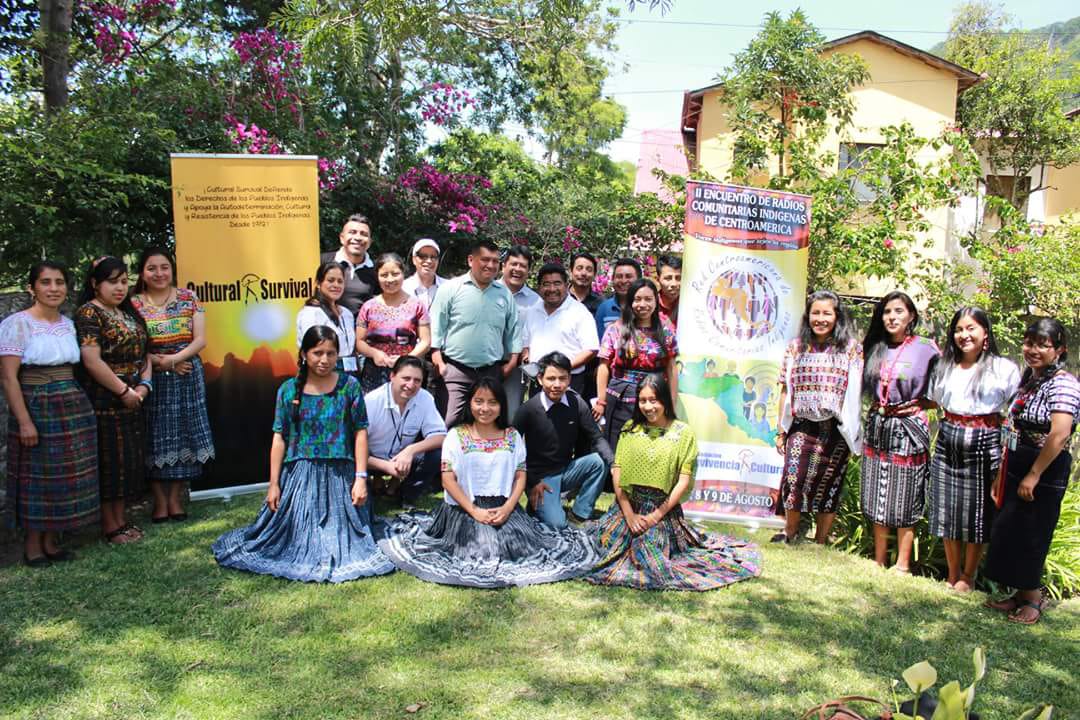 Since the establishment of the network, progress has been made in each of the seven countries. In Belize, where a single Indigenous station reaches the southern part of the country where most of the Indigenous population lives, a group of community journalists have been trained to report on Indigenous rights issues. In Honduras, 17 Indigenous radio stations have organized themselves into an Indigenous Radio Roundtable to work together on common issues. In El Salvador, communities have been in discussions with the government about opening up frequencies to Indigenous communities for the first time. In Panama, where the current law technically allows for Indigenous organizations to obtain a broadcast license, communities have been frustrated by bureaucratic obstructionism. Two Indigenous communities have done all the required preparations to obtain broadcast licenses, but have been rejected on technicalities. In protest, the autonomous Indigenous government of Guna Yala went on the air with an ‘experimental radio station’ for a few days last year and again this month. Many challenges still remain, however, hopeful examples of positive changes to obstructive broadcasting laws do exist. Mexico recently changed the broadcasting law to allow for Indigenous communities to obtain licenses.

“What are the things that makes us different as Indigenous radio journalists?” These were some of questions brought up by Socrates Vásquez, of Jenpoj Community Radio in Tlahuitoltepec, Oaxaca, Mexico. At the beginning of his remarks, he highlighted the struggle of Indigenous Peoples throughout history and how Indigenous communication is not only carried out between human beings but all living beings. In Mexico, at the beginning of 1960s, Indigenous People began to communicate through magazines, newspapers, and radio production centers. During the commemoration of the 500 years of invasion of America, among the demands was the right to autonomy and the means of communication. Later on, with the Zapatista uprising in 1994 and the signing of the San Andrés Peace Accords, the demand on communication was consolidated.


The same scenario has played out in several countries. Government and business have sought ways to keep Indigenous Peoples from their own means of communication and to protect their private communication enterprises. They argue that there are no frequencies available and that they have to get the usufructs through tenders. Instead of protecting the well-being of citizens, the governments have sided with communication monopolies promoting undemocratic laws, extending their usufruct indefinitely without taking into account Indigenous Peoples. This is a serious violation of freedom of expression and international human rights standards, such as the ILO Convention 169, the United Nations Declaration on the Rights of Indigenous Peoples, the American Declaration on the Rights of Indigenous Peoples.

At the meeting, the Regional Council of the Central American Community Radio Network developed a document outlining the challenges community radios face in the current contexts. Law and communications professionals were invited to weigh in regarding Guatemala and Mexico, including: Cristian Otzin of the Association of Mayan Lawyers of Guatemala; Eva Tecun, and Socrates Vásquez.

Cristian Otzín emphasized that the state of Guatemala is reluctant to democratize the radio spectrum because a privileged minority currently benefits, who label community stations as pirate and illegal, comparing them with organized crime. In 2011, a case was presented to the Constitutional Court, questioning the auction system, which is currently the only mechanism to acquire legal radio frequencies. The Court pressed the Congress in 2012 to pass a law respecting Indigenous Peoples’ rights, which has not advanced in the legislative body. Parallel to these actions, the Public Ministry has misapplied criminal law statutes to justify raids against community radio stations and to silence the voices of the people by confiscating transmission equipment and imprisonment of community journalists.

The meeting showcased the reality of Indigenous Peoples of the region, which is why it is necessary to strengthen media and address exclusionary and discriminatory policies. The resulting strategic plan of the Network emphasizes the defense of freedom of expression and the promotion of national and international actions to demand responsible State legislation and public policies to democratize media in favor of Indigenous Peoples.