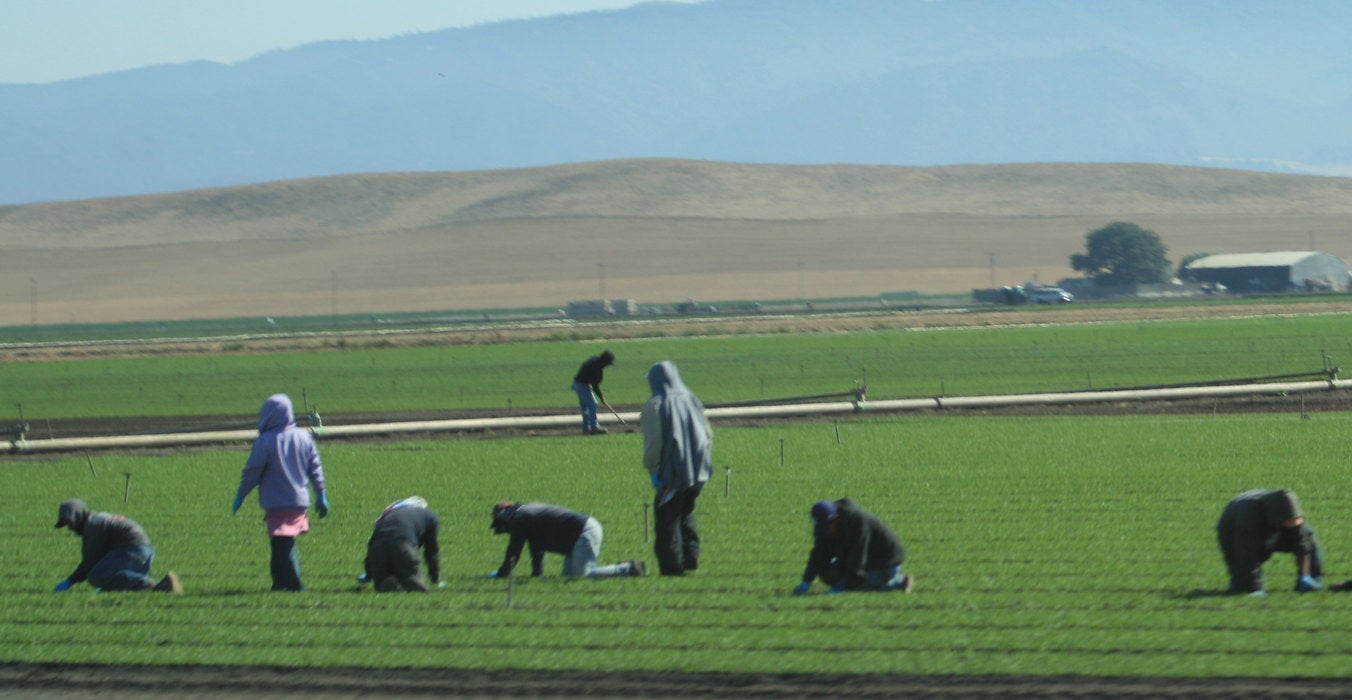 From the dairy farms in New York to the vast fields of the Central Valley of California, Indigenous migrant farmworkers are among the most overworked, underpaid, vulnerable, and disproportionately impacted by the COVID-19 pandemic. Indigenous essential workers put food on the table every day for us, our children, and our elders, but in return face poor working conditions due to discrimination and harassment, all of which has been exacerbated by the pandemic and the wildfires on the West Coast.

Arcenio López, the son of a migrant farmworker family from Oaxaca, Mexico, began working as a farmworker in the strawberry industry when he arrived in the United States in 2003. In 2004, López began volunteering with the Mixteco Indígena Community Organizing Project, eventually becoming executive director in 2014. The community organizing project fights for social justice and systematic change, respect for the rights of Indigenous Peoples, and immigration reform. They also advocate for access to health, education, and social services in a culturally and linguistically relevant manner and organize Indigenous farm workers in regard to their labor rights.

In unexpected emergency situations such as the COVID-19 pandemic, the Indigenous migrant population is one of the most severely impacted. Farmworkers must often work under conditions which make social distancing and handwashing difficult, and enforcement of workers’ rights is often lacking. As López explained, “Farmworkers at this time are considered essential workers, but they do not receive essential benefits such as health insurance or wage replacement or hazard exposure compensation.” Housing and limited family finances have also proved challenging during the pandemic. Many families need to live in crowded conditions in order to afford the expensive rent in the Central Valley, sometimes with up to 20 people in one unit. With schools and childcare centers closed, oftentimes at least one parent has needed to stop working to care for the children, putting even more strain on household finances.

Since mid-March of 2020, the Mixteco Indígena Community Organizing Project has transitioned to working completely online. At the onset of the pandemic, the organizing project quickly shifted priorities to better serve the needs of Indigenous migrant communities in their region. They have been advocating for the enforcement of workers’ rights so that farmworkers can follow safety recommendations during the pandemic. Another priority has been fulfilling requests for interpretation services and public service announcements in Indigenous languages, as well as meeting the high demand of providing one-time financial support for undocumented individuals.

Crispin Hernández emigrated from the Mixtec region of Mexico to New York in 2012 and began to work on a dairy farm. In 2013, he received a health and safety training from the Workers’ Center of Central New York. Prior to his arrival in New York, a Mixtec man named Henaro had been killed at a dairy farm. According to Crispin, this tragic event was due to lack of training, so he very quickly decided to become involved with the Workers’ Center. In 2015, he helped to organize a protest and was subsequently fired from the dairy farm. He was fired again at his next job for forming a committee with his coworkers. That same year, with the help of the Workers’ Center and the Worker Justice Center of New York, Crispin sued the State of New York to demand that the right for agricultural workers to organize be protected. In 2019, in a historic victory, an appellate court in Albany ruled in his favor. Another 2019 victory that involved the joint efforts of the Workers’ Center and the Worker Justice Center resulted in Governor Andrew Cuomo signing the Green Light Law, which allows undocumented workers to apply for a driver's license.

Crispin officially started working with the Workers’s Center in 2017 as a community organizer responsible for educating workers, particularly agricultural workers, about their rights. According to him, much of what has been achieved around workers’ rights in New York is due not only to the Workers’ Center and the Worker Justice Center, but also to the support of other organizations, unions, and communities in the area who recognize the need to improve conditions for farmworkers.

Crispin Hernández says, “I want to emphasize the importance of agricultural work. It is such hard work, and it’s so important, that the workers deserve to be heard. They deserve to receive training so that they can avoid the tragic incidents and other things that are happening in the workplace.”

With the advent of the COVID-19 pandemic this year, the Workers’ Center has turned toward supporting farmworker families with direct aid such as providing basic safety equipment and food. They have also continued distributing information about workers’ basic rights, this time in specific reference to COVID-19. Hernández states, “COVID has affected all essential workers, not just agricultural workers, and after everything that has happened these last few months, we have succeeded in getting Governor Cuomo to establish health and safety requirements in the workplace. But there are a lot of employers that aren’t meeting those requirements, so we are also working to establish a fund to support the families that need help. We’re also asking for legislation to support essential workers in addition to the HEROES Act. We want our voices to be heard and we want to establish a law that will support the essential workers in the long-term.”

Cultural Survival is an international, Indigenous-led organization that supports Indigenous rights around the globe through efforts predicated upon the UN Declaration on the Rights of Indigenous Peoples. “The main connection between Cultural Survival and diaspora communities at the present has been through radio. Since the COVID-19 pandemic began, there has been an increase in poverty, abandonment (i.e., no basic services), and even violence from states against Indigenous Peoples. Another big problem is that many countries use aggregated statistical data that lumps all Indigenous nations together, rather than recognizing their individual situations,” stated Avexnim Cojtí.

According to Cojtí, the UN Migration Agency defines a migrant as “any person who is moving or has moved across an international border or within a State away from his/her habitual place of residence, regardless of (1) the person’s legal status; (2) whether the movement is voluntary or involuntary; (3) what the causes for the movement are; or (4) what the length of the stay is.” Migrant agricultural workers in the United States and Canada are mainly of Mesoamerican origin, primarily from Mexico and Guatemala, and movement has been common among these Peoples for a long time. Cojtí asked, “When it comes to actually talking about migrants, how are we the migrants if these are our original territories and we had migration as something very common?”

In reality, the recent history of movement of Mesoamerican Indigenous Peoples to the United States and Canada has often been involuntary, a result of the dispossession of Indigenous lands and the imposition of government systems in which Indigenous Peoples lack a voice. In addition, the borders mandated by the nation-states now cause many Indigenous nations to straddle two countries, such as on the border between the United States and Mexico. Further causes of involuntary movement have included civil wars, ongoing poverty, displacement due to natural resource extraction, persecution of land defenders, limited local employment opportunities, and violence against women. The destruction of local economies by industrial agriculture, violence linked to narcotrafficking, governmental abandonment and violence, and climate change have also caused Mesoamerican Indigenous Peoples to migrate as a last resort.

Arcenio López shared how the migrant community is moving through this crisis and the strategies communities are enacting. “ Since mid-March of 2020, the Mixteco Indígena Community Organizing Project has transitioned to work completely online. Their team is in a process of transition, adding additional technological capacity like ZOOM and creating COVID-19 informational materials in Spanish and other regional languages. The team shares this information via several platforms, including radio FM, their radio and organizational Facebook pages, YouTube, SoundCloud Audio, and Facebook Live.”

The Mixteco Indígena Community Organizing Project is providing outreach and education on new labor rights such as the Families First Coronavirus Response Act (FFCRA) which requires certain employers to provide up to 80 hours of paid sick leave to workers affected by COVID-19. They are also collaborating with local, state, and federal agencies to centralize legal resources for Indigenous migrant farmworker families. Their team of 30 caseworkers is simultaneously providing case management to families with COVID-19-positive members to get them the resources they need while in quarantine. Collective advocacy efforts with other community organizations and government agencies have been successful in producing rapid response plans.

As a result of the organization’s advocacy, the Public Health Department in Ventura-Santa Barbara County agreed to improve Indigenous communities’ access to healthcare by waiving all fees for COVID-related care. López emphasized that “This is one of the things that COVID has impacted – we’ve been advocating for health access for so many years, but just because we are in the pandemic, they waive the fees. So if they did it this time, I think they can do it in the future, regardless of the legal status of our people.”

During the pandemic the Mixteco Indígena Community Organizing Project has also provided assistance by teaching virtual organizing skills, distributing basic safety equipment to farmworker communities, providing Indigenous language interpretation at COVID-19 mobile testing sites, and partnering with other radio organizations state-wide. López believes that there is still much work to be done around linguistic justice, especially in the health, education, and legal systems, and in addressing mental health and resiliency in regional communities.

Crispin says that the Workers’ Center and partner organizations have been doing similar work: distributing face masks, hand sanitizer, and food to isolated families. And he says it’s very important to note that agricultural workers are very isolated, and that most of the workers who have been the worst affected are people of color, migrant workers from Central America.

“What we’ve achieved with the Governor so far hasn’t been enough. So we keep working to ensure better protections for all essential workers, and especially agricultural workers. We share information by posting videos on the Workers’ Center main page, on Facebook Live, and through Whatsapp. If workers contact us to say they have been affected by COVID-19, we tell them about the clinics where they can go and find out if they have the virus or something else. But really, there isn’t anything very well-established. So that’s why we keep working to get the employers, the Senators, the Representatives, the Governor, and the Federal Government to establish resources and laws to protect the workers at the national level, not just in the United States, but also in other countries. What we are living through with COVID-19 is something very historical, and it’s sad because the essential workers are the most affected. They leave their families, their kids, to go to work to feed the families of the world, and they’re the ones who are losing their lives. And like Arcenio mentioned, we’re going to keep fighting for more protections, especially to protect the lives of all these workers, because we’re all human and we deserve to be protected, too. But to achieve that we will have to keep fighting,” says Hernández.

Cojtí shared three major ways in which Cultural Survival is working with Indigenous migrant farmworker communities. “The first is the Keepers of the Earth Fund, which supports Indigenous-led COVID-19 responses. As of this interview, Cultural Survival has awarded 29 small grants to Indigenous communities to accomplish whichever project they find to be the most urgent need in the community. There are projects that have to do with strengthening Indigenous, or Indigenous-hybrid, health systems, exchange of seeds, creating seed banks, distributing food, taking care of the elderly, and taking care of education.”