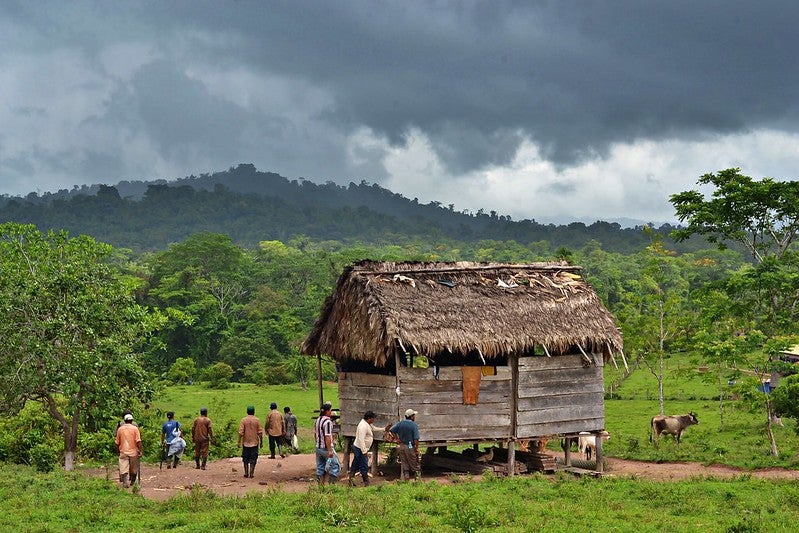 According to early reports, an armed group of approximately 80 people who identify as “the Kukalón Armed Group” recently disturbed the peace of an Indigenous Mayangna village of Alal, Bonanza, 400 kilometers northeast of Managua, Nicaragua. On January 28, 2020, the group massacred 6 Indigenous Mayangnas, another 10 are reported missing, and several houses were burned. Five of the victims have been identified: Tránsito Mesa, Víctor Díaz, Juan Emilio Devis, Carlos Martín, and Miguel Dixon.

Gustavo Sebastián Lino, president of the Mayagna Sauni As territory, along with other members of local Indigenous rights organizations have denounced this violent attack. Alal is a remote community in the Mayangna Sauni As territory, within the Bosawas Biosphere Reserve in the department of Jinotega, shared by the Autonomous Region of the North Caribbean Coast (RACCN) and bordering Honduras.  Declared a Biosphere Reserve by UNESCO in 1997, it is the largest forest reserve in Central America and the third largest in the world.  Although it has been known as one of the most intact tropical rainforest and cloud forests in the region,  invasion by non-Indigenous settlers, loggers, and ranchers has caused ceaseless conflict, leaving the biosphere and its communities threatened.

In 2001 the Mayagna won a landmark case against the government of Nicaragua in which the Inter-American Court of Human Rights held that they had a right as Indigenous people to their collective land, in what was known as the Awas-Tingi ruling, after the community that brought the case. In December 2008, the government completed a process of demarcating and titling the land, securing their title to a total of 73,394 hectares.

Since then, community leaders have repeatedly denounced violence at the hands of non-Indigenous people known as “colonos”, or settlers who entered their territory looking to exploit and take control of natural resources. On numerous occasions Indigenous authorities have sued the government for their territorial integrity, asserting their rights and expelling the invaders who disturb their lifeways.

The Communal Property Law (law 445) requires the Nicaraguan state to complete saneamiento, a ‘healing’ of the land, meaning the removal of colonists and industries from Indigenous and Afro-descendant territories, but the Nicaraguan government has failed to fulfil this obligation.

“Our communities have been threatened, massacred and exploited. The government has made decrees and actions that only remain in paper. One of them is the creation of the ecological battalion that was thought to give security to our communities but we have not seen results. Faced with this situation, we need the government to immediately attend to the matter and carry out justice as soon as possible,“ Lino told Comunicación Digital Nicaragua Actual.

On January 30, 2020, the Inter-American Commission on Human Rights (IACHR) condemned the attack on Twitter in Alal stating, "the State will be in violation of international obligations to protect the integrity, life and Indigenous territories, if it does not prevent, investigate, and punish these events." The IACHR also emphasized that “this pattern of attacks has been repeated in Nicaragua for years. The State must urgently adopt comprehensive policies to protect the rights of Indigenous Peoples to life, integrity, and territory. ”

The Nicaraguan National Police issued a press release describing two victims of gunshot wounds, but did not corroborate any information regarding the 10 disappearances. Cases of violence within the Bosawas Biosphere Reserve are under the jurisdiction of the Nicaraguan Army, along with the Ministry of Environment and Natural Resources. Although these institutions have yet to make a public statement, locals have reported that a group of 30 people is in Bonanza conducting an investigation.

Cultural Survival repudiates acts of violence against Indigenous communities and joins the Mayangna leaders in calling on Nicaraguan government to comply with domestic and international law by defending the integrity of the Indigenous lands, as well as Indigenous Peoples; most essential human right, the right to life and security of person. We encourage Nicaraguan authorities to investigate and bring swift justice for the victims of this massacre.