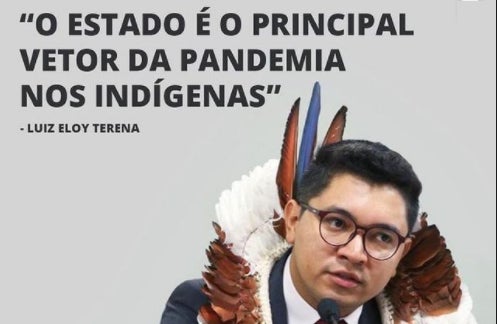 Photo: "The Brazilian State is the main vector of the pandemic among Indigenous Peoples in Brazil." Image courtesy of Eloy Terena's Instagram account.

Indigenous lawyer Luiz Eloy Terena (Terena) works for the largest Indigenous organization in Brazil, Articulação dos Povos Indígenas do Brasil (APIB), a unifying national body and reference point for the Indigenous movement in Brazil, founded in 2005. APIB, as it describes on their website "was born with the purpose of strengthening Indigenous Peoples' unity and the articulation among the different regions and Indigenous organizations in the country."

Eloy Terena is a human rights activist and holds a doctoral degree in Law from École des Hautes Études en Sciences Sociales (EHESS), Paris, France. The 32-year old lawyer was born in a Terena Indigenous village in Aquidauana in Mato Grosso do Sul, Brazil and Eloy Terena was also the leading lawyer in a historical moment of the Indigenous rights movement in Brazil in the last year, as featured in a recent article by Cultural Survival.

According to APIB’s recent report on the impact of the COVID-19 pandemic in Brazil, the Bolsonaro government has been the main agent for transmission of COVID-19 into Indigenous communities.

According to Terena and corroborated with data in the APIB report, “The federal government is the main transmitting agent of the virus among Indigenous Peoples. Failure to build effective actions to fight the pandemic, neglect to protect workers and users of the Indigenous Health Subsystem, and the promotion of policies that favor the invasion of Indigenous territories are the main factors in this context of violations.”

To date, 163 Indigenous Peoples have been infected in Brazil, with more than 50,000 cases among them. Concurrently, during the pandemic, institutions have been weakened and public policies have been drafted by the Bolsonaro administration that have cut financial resources for minorities and Indigenous Peoples. Moreover, violence against peoples Indigenous Peoples is increasing within and outside the territories with the number of murders and harassment on the rise.  Invasions in demarcated lands have also increased as a consequence of Bolsonaro’s refusal to implement lockdowns or quarantines in the country to protect the entire population. “We affirm that the worsening of violence against Indigenous Peoples during the pandemic was encouraged by Bolsonaro,” APIB states in the report cited above.

After months of misleading information, lack of mitigation policies, actions, or plans to deal with the pandemic from the federal level, including falsifying information and data, ignoring WHO guidelines, and even promoting, without data, the widespread use of drugs such as hydroxychloroquine for the entire population, the Brazilian government has demonstrated negligence regarding COVID-19 infections and deaths of Indigenous Peoples in Brazil. To date, there have been more than 278,000 deaths and Brazil has set a world record of more than 1,800 deaths per day nationally for two weeks. This comes despite Brazil s having been an example in vaccination campaigns in the past.  As of mid March 2021, Brazil is still negotiating to acquire vaccines. Cities and states themselves have had to purchase and negotiate the vaccines because the federal government has failed in drafting and implementing a national plan.

In his article, also published in newspapers and on Instagram, Terena makes the following declarations: “COVID-19's biggest transmitter is the government. I am Terena and a lawyer, but it is not necessary to be an Indigenous person to recognize this fact; nor to be trained in law to consider the criminal negligence [of the Brazilan government]. On the country, in a year, the pandemic has already caused more than 273,000 Brazilians to lose their lives. Nor is it necessary to be an epidemiologist to agree that many of these deaths could have been prevented. In July 2020, the Articulation of the Indigenous Peoples of Brazil (APIB) filed a Fundamental Failure Compliance Statement (ADPF) at the Supreme Federal Court (STF), to pressure the executive [branch] to comply with its constitutional obligations to take care of us. It was a desperate measure because the new coronavirus arrived in Brazil in the midst of epidemic [dengue, malaria, illegal miners,etc] invasions on our lands. Minister Luís Roberto Barroso then ordered the government to present a plan to protect all Indigenous Peoples in the country. So far, three versions have been submitted and rejected. When the first was dismissed, on July 29, 2020, 276 of us had died; last month, there were already 576.

(...) Many ethnic groups are at risk of extinction - as it has been the case with so many over time. We are unique, ancient cultures; who hold useful knowledge for all mankind.

The data used here is from the Ministry of Health, which only counts Indigenous people living in villages in demarcated territories. More complete, the APIB’s surveys indicate more than a thousand deaths.  Still, in analysis, the fourth version of the government plan is equally unsatisfactory not only in our assessment but also from the Brazilian Association of Public Health and the Oswaldo Cruz Foundation (Fiocruz).

On February 17, 2021, COVID-19 took Aruká, the last man of the Juma people. This death is tantamount to an ethnocide, as it could have been prevented. Aruká was a victim of the omission and actions of the government, which did not install sanitary barriers to protect him, as demanded by the STF. At the hospital, he received drugs indicated by the Ministry of Health, whose effectiveness is not recognized by the World Health Organization, the National Health Surveillance Agency, and the Brazilian Society of Infectious Diseases.

With Aruká's death, there are only four Juma [left], his three daughters and a granddaughter. Of the Kanoê, there are three people left; of the Avá-Canoeiro people, five; and the Akuntsu, six. The most desperate situation is that of the Piripkura. Today there are only two survivors. Both men. Almost 1,400 hectares of its territory - about 5 percent  of the total - have been deforested, mostly between August and December of last year.

There are at least 114 isolated Indigenous groups, especially vulnerable to diseases that come from the outside. Because they are more vulnerable, their land is also more subject to invasion. One of the president's greatest obsessions is to open our territories for the exploration of minerals; and of the 143 requests filed at the National Mining Agency (ANM) last year, 71 relate to areas inhabited by Indigenous Peoples. As is well known, not everyone is waiting for official approval. This has not only happened in the past two years but the current government's [encouragement]of  more invaders.

On March 1, I denounced this extermination policy at the 46th ordinary session of the UN Human Rights Council, as a representative of APIB. The whole world is concerned with what is happening in Brazil. There are Indigenous people who refuse to be vaccinated due to fake news spread by government supporters. As city dwellers, we are also not immune to misinformation. It is urgent that the various Peoples that make up the Brazilian people come together to combat the common evils that afflict us.”

Every day, we see that the current government of Brazil not only fails to protect the rights of Indigenous Peoples, guaranteed in the Federal Constitution of 1988 and in international treaties to which the country is a signatory, but its solutions are worse than the problem. The Brazilian government is a major and dangerous threat to Indigenous Peoples.

-- Edson Krenak Naknanuk is an Indigenous activist and writer in Brazil and a consultant at Cultural Survival. Currently, he is a Ph.D. candidate in Social and Cultural Anthropology with studies in Legal Anthropology at Vienna University, Austria. He is also a teacher of languages and humanities. He loves interacting with children and youth and preparing them for a better world.