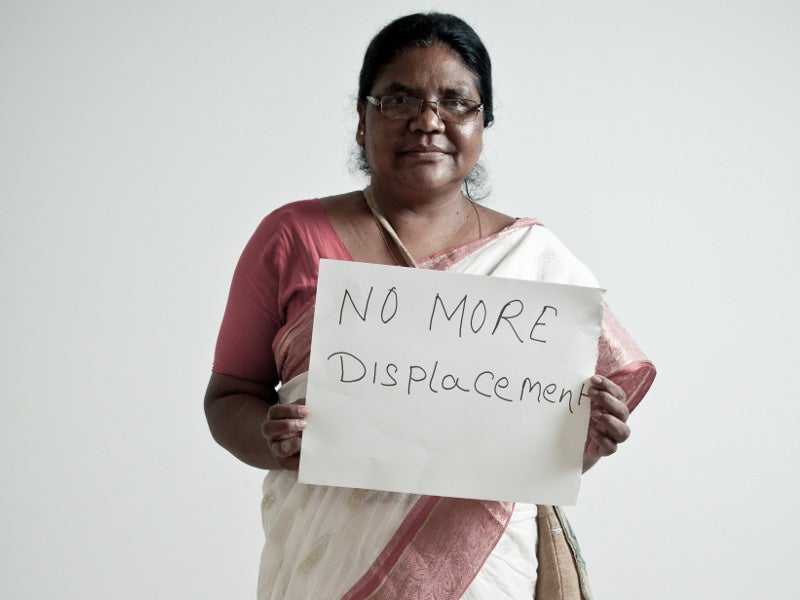 CAMBRIDGE, MA. Grassroots Indigenous rights heroes too often go unrecognized. Yet their efforts to promote the rights of their peoples and protect their traditions, languages, and resources are critical to cultural survival.  On April 23, 2013 in recognition of her work with Adivasi (Indigenous) communities in India, Dayamani Barla was chosen by Cultural Survival, an Indigenous Peoples rights organization, as the winner of the 2013 Ellen L. Lutz Indigenous Rights Award.

“Cultural Survival is honored to present Dayamani Barla, an Indigenous human rights activist and journalist from the Munda tribe in the Indian state of Jharkhand, with the 2013 Ellen L. Lutz (ELL) Indigenous Rights Award," says Cultural Survival Executive Director Suzanne Benally. Barla has been on the forefront of people’s movements against corporate and government-led land grabs and other injustices that threaten the survival, dignity, and livelihoods of Indigenous Peoples. “This prize is presented in recognition of outstanding human rights work, dedicated leadership for Indigenous Peoples rights, and a deep life commitment to protecting, sustaining, and revitalizing Indigenous cultures, lands, and languages,” says Benally. Barla was chosen from close to 60 nominees by a distinguished panel of Indigenous leaders.

Coming from a humble background where she worked as a domestic servant to fund her education, Barla is the first tribal journalist from her state and is considered as the “voice of Jharkhand” for her powerful storytelling, community organizing, and writings. “Barla has been a trailblazer on many fronts, charting new waters as an Indigenous woman to ensure the voices and perspectives of Adivasi people are heard by the larger mainstream society,” says her nominator Terry Odendahl, executive director and CEO of Global Greengrants Fund. As one of the first female Adivasi journalists in India, she has won many awards, including the Counter Media Award for Rural Journalism and the National Foundation for India Fellowship. Barla’s writings and activism shed light on the ways in which the deep cultural, spiritual, and traditional knowledge heritage of Adivasi communities are intertwined with their jal, jungle, and zameen (water, forests, and land).  She is an outspoken critic against the racism and persecution that Adivasi communities face.

Together with her colleagues from the Adivasi Moolvasi Astitva Raksha Manch (Platform of Indigenous Adivasi People to Defend their Existence), Barla has prevented ArcelorMittal, a global mining giant, from plundering the rich natural resources of Jharkhand. The proposed steel plant, a $9 billion planned investment, would have seized 12,000 acres of land and displaced 40 villages, additionally harming the surrounding ecosystems and by extension the livelihoods and survival of Indigenous communities.  Loha nahi anaj chahiye! (“We want grains, not iron!”) was a rallying cry of Indigenous communities protesting this project. “We will not allow the ArcelorMittal Company to enter into the villages because one cannot be rehabilitated once displaced. The lands which we cultivate belong to our ancestors; therefore we will not leave it,” Barla said in an article published by Adivasi journalist Gladson Dungdung.  According to the Working Group on Human Rights, 60 to 65 million people in India have been displaced from their homelands due to development projects since India’s independence, making it the highest number of people uprooted in the world in the name of progress.  Forty percent of those displaced are Adivasi communities.

Barla has also been involved in people’s mobilizations against the Koel Karo dam project. This struggle is considered one of the longest and most successful anti-dam movements in India, and is rooted in the highly mobilized Munda Indigenous community. Located in the Chhota Nagpur Plateau, Jharkhand is blessed with rich biodiversity from its evergreen forests and is bestowed with tremendous mineral wealth. However, an unequal process of industrialization, urbanization, and corporate globalization has led to immense human rights violations and displacement of Indigenous peoples from dams and mining activities in the region.

Barla’s steadfast commitment to the people’s democratic and constitutional rights to assemble and dissent has attracted the wrath of corrupt government and corporate actors, who are pushing for rapid industrialization and economic globalization that disenfranchises Indigenous communities. From October 18 to December 21, 2012 she was jailed by the Jharkhand government under a litany of charges ranging from leading peaceful protests against fertile farmland acquisition in Nagri to demanding job cards for rural poor in Angada block under a national employment guarantee scheme.  “Dayamani’s jailing was a reminder to civil rights activists across the nation of the unfriendly role the Jharkhand state is taking towards drivers of democratic change,” says Odendahl. Recently she has been leading anti-land acquisition struggles, along with farmers of Nagdi, whose precious fertile agricultural land has been allocated for the construction of business, law, and information technology schools in Jharkhand. In a letter written from her jail cell, Barla reflected that the “looters of the state have become well-wishers in the eyes of the government.”

The selection of the ELL Award recipient is based on the following criteria: the Indigenous activist’s work is primarily at the grassroots level directly in Indigenous communities, and/or expands from there into advocacy at the state and international level; leadership is recognized by the communities that it represents;  the activist works towards promoting and advancing Indigenous/human rights and this work reflects his or her compassion, dedication, and personal sacrifice to his or her people, communities, and Indigenous Peoples; and the award will raise the profile of the recipient’s work, advancing the activist’s efforts and helping to safeguard his or her well-being. “Dayamani is an example of a selfless and courageous activist, who powerfully demonstrates how Indigenous women play a crucial role in safeguarding the rights of their communities, while also protecting the rights of nature,” says Odendahl.

The Award recognizes individuals for sustained and significant efforts to protect and advance the rights of Indigenous Peoples, often at great personal risk. The ELL Award views “grassroots” leaders as those rooted in local efforts, where positive change is created through community or citizen participation in the issues that affect them. Through recognizing these individual leaders, the Award seeks to inspire other Indigenous people to take extraordinary actions to protect the world’s cultural diversity.

This year’s ELL Award, which comes with a $10,000 cash prize, brings critical attention to the undemocratic attitude of the Jharkhand state towards social activists, as well as honoring and celebrating the critical work of an Indigenous human rights defender who has fought brave struggles for the greater good of Adivasi communities in the state of Jharkhand and beyond. Barla will be presented with the award at a ceremony on May 23 at the Museum of the American Indian in New York.

About Cultural Survival:
Cultural Survival is a global leader in the fight to protect Indigenous lands, languages, and cultures around the world. In partnership with Indigenous Peoples, we advocate for Native communities whose rights, cultures, and dignity are under threat. For more information go to www.cs.org