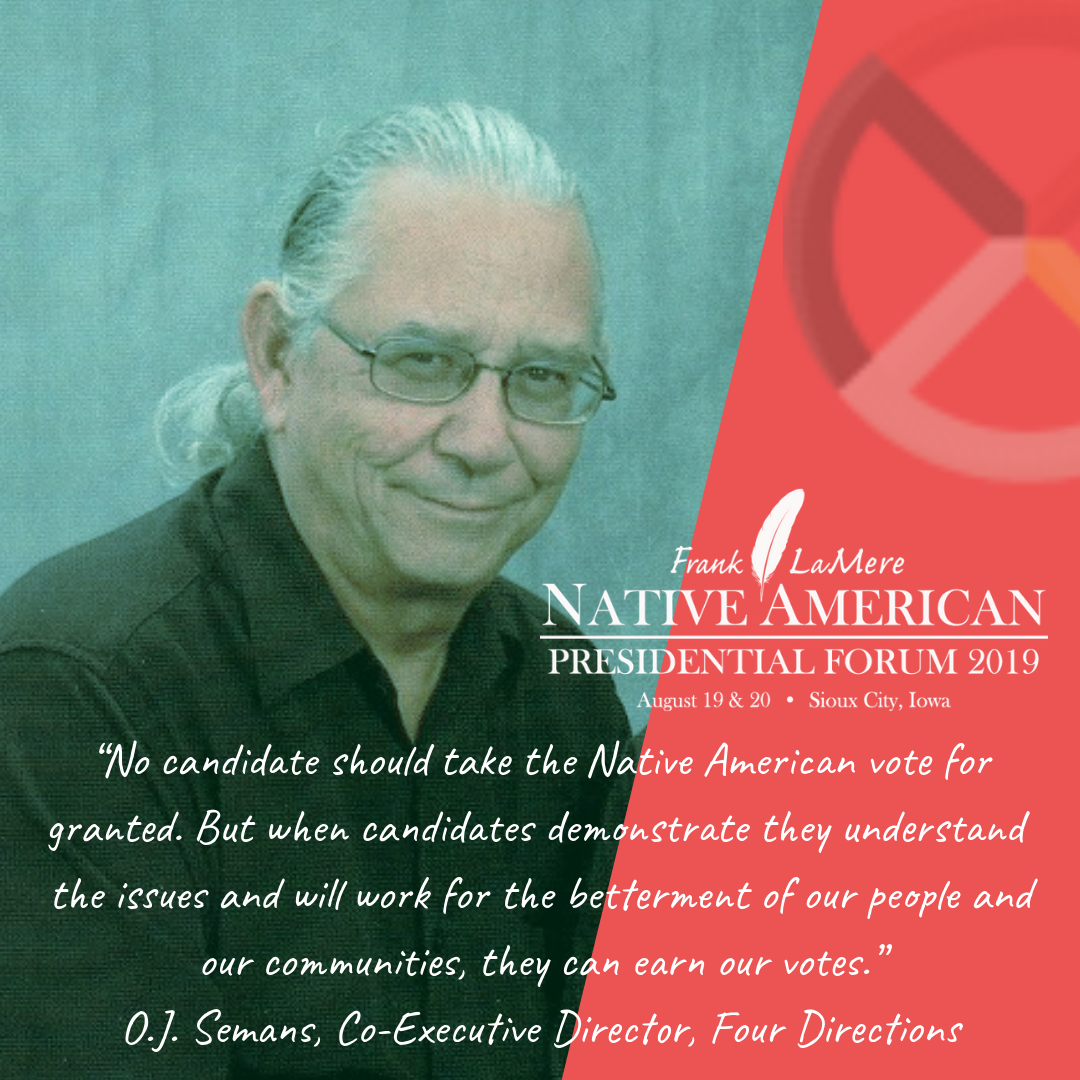 On August 19 and 20, 2019, the United States saw its first ever Native American Presidential Forum in Sioux City, Iowa. There, Tribal leaders and Native organizers, including Native youth, were able to ask the nine candidates questions concerning topics such as the climate crisis, missing and murdered Indigenous women, and continuous government neglect of Native American peoples. Each candidate was individually questioned by a panel of six to eight panelists, in front of an audience of members from different Tribal Nations across the country.

The panels were moderated by Mark Trahant, of the Shoshone-Bannock Tribe, editor of Indian Country Today, a news platform based in Washington, DC. Also in attendance was Marcella LeBeau, of the Cheyenne River Sioux Tribe, a 99-year-old veteran of the U.S. Army Nurse Corps. She was present to ask each candidate their views on H.R. 3467, the “Remove the Stain Act”, a legislation recently introduced to rescind the 20 Medals of Honor given to the murderers at the Wounded Knee Massacre, a massacre of the Lakota People by the United States government in 1890. All of the candidates supported the legislation.

Candidate Julian Castro has released a comprehensive plan centering the needs of Tribal and Indigenous Peoples in the United States, the first 2020 candidate to do so. His plan, called the People First Indigenous Communities Plan, mentions issues like housing, healthcare, education, voting rights, and strengthening Tribal sovereignty, and it is broken down into five main categories: 1) Strengthening Tribal Sovereignty, 2) Honoring Treaty Commitments, 3) Justice for Indigenous Women, 4) Eliminating Barriers to Democratic Participation, 5) Partnering with Indigenous Communities Throughout the Americas.

Secretary Castro has stated, “We must learn from our failures and work toward a better future. We must end the disparity, injustice and intolerable conditions in some Indigenous communities and work to honor treaty obligations, respect the relationship between governments, and stop corporations from exploiting sacred lands for their own profit.”

Also noteworthy at the forum was the Independent candidate Mark Charles, the only Native American running for President in 2020. In his speech, Charles focused on the systematic nature of white supremacy and oppression in the United States, pointing out that “‘We the people’ has never meant ‘all the people.’” He stated, “Now, if you have a house that’s built on a bad foundation, you’re going to get cracks in your walls. You’re going to get gaps in your windows. And you’re going to get a creaky floor. And you can scream and you can fight about what color to paint the walls, what kind of calking to use in your windows, and what kind of carpet to put on your floor, but until you go into the basement and examine your foundation and do something to firm those up and make those strong—you are never going to fix the problems in the house.”

If you missed the Live Forum, you can still watch it here.